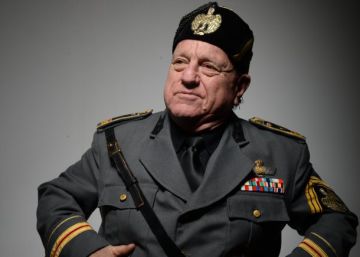 “Spaniards, Mussolini has returned”, we could say, paraphrasing Carlos Arias Navarro, after seeing the reincarnated Duce in Leo Bassi. Has returned, before the resurgence of theirs, to separate the fascist grain from the straw, review the history and comment on the news: “Dear friends of Vox: it hurts that you hold rallies in golf clubs. I am from a humble family. My father, a blacksmith and a socialist, called me Benito in honor of Benito Juárez, hero of the Mexican Revolution. You are posh, you don't have facades na.

Lone ranger of today quasi disappeared Spanish political cabaret (how much we envy here the incisive desparpajo of Las Reinas Chulas, satirical monarchs of Mexico City!), Whose epicenter one day was the Alfil Theater of Carlos Romay, Bassi rivets the diatribes of the Duce with forceful actions, which make the public feel at imminent risk. Dialectic, the great Hispano-Hispanic histrion loves to put in voice of his characters contradictory ideas with which they are supposed.

By Bassi, Mussolini remembers his profuse journalistic activity, his relations with Hitler but also with tycoons and with the futurists, his supposed encounter with Walt Disney – of which both of them gave family faith – the popularity he reached (it was the cover of Time four times) and the disappointment distilled by the last interview he granted, in which, retrospectively, he declared himself deceived by the economic elites. It was an instrument to stop the advance of socialism, its interpreter comes to say.

The show is vigorous, but it is about to be polished: all of Bassi grow function by function. The documentary that complements it is of remarkable interest. The pedestal that the actor uses to harangue and store clothes should allow him to lower more fluently.

The RAE puts in the dictionary the words “coronavirus”, “COVID” or “deconfine”

“There is no fear that no harm comes”