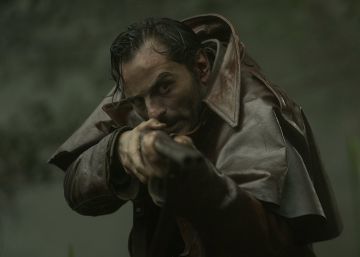 From an aesthetic and narrative point of view, the struggle of the maquis, the anti-Franco guerrilla that launched operations from the mountains in search of the recovery of territory after the national victory in the Civil War, always had the air of Wester. In vain crusade against power by some tired and failed heroes, whom life cornered in a place where resignation was inevitably linked to death.

It was well known to see from Franco's orbit with movies like Torrepartida (Pedro Lazaga, 1956), in which the armed civilians who resisted in illegality were portrayed as mere bandits, as classic western runaways devoid of any political connotation and ideal. And already in democracy by Julio Sánchez Valdés, director of Moon of wolves (1987), based on the novel by Julio Llamazares, and in which the treatment of physical space was very similar to that of the wéstern.

A particularity that Alfonso Cortés-Cavanillas now collects in Deaf, his second feature film, to take it to a much more explicit dimension and turning the original comic by David Muñoz and Rayco Pulido, published in 2008, into a spaguetti western of twilight, with characters exhausted by time and loss, set in 1944, when the imminent end of World War II still predicted a possible allied help and from the maquis the so-called Reconquest Operation was launched, an important incursion from the valley of Aran that should be accompanied later by a popular uprising.

In Deaf, Cortés-Cavanillas and his companions from La Caña Brothers, the producer that occupies the unusual last credit title (“a film by La Caña Brothers”, in the manner of David O. Selznick's productions or, in a way, now with Netflix), have delved into iconographic elements of Western cinema that in the original comic hardly stood out, and although they have been relatively faithful to the plot and a part of the actions of the story, they have moved away from both the type of framing and the white and black, and above all the essentiality of Muñoz y Pulido's work: silence, because in the graphic novel the vast majority of the cartoons were empty of dialogue. Thus, they have invented a new wardrobe and accessories for their hero (very special coat, hat, horse), and accompany each sequence with a soundtrack of great vehemence, created by Carlos M. Jara, with sound effects and debtor instruments of the Ennio Morricone music, with a lot of percussion and trumpets.

With a formidable production and perfect in stages, costumes, locations, sets and technical invoice in general, Deaf It is seen with passion during the first hour of footage, entering fully into a type of genre cinema where political aspects are only in the background. Something that is not new either because Guillermo del Toro already did something similar joining fantasy and terror in The Devil's backbone Y The Pan's Labyrinth.

However, despite the excellent interpretive work of Asier Etxeandia, Marian Álvarez, Aitor Luna, Imanol Arias and Ruth Díaz, and in general of all, in the second half of the story, especially after the appearance of the Russian mercenary, everything is much more debatable, and sequences are emerging with an inconceivable point (rape, especially), even within the gender parameters between which production moves. A fall that, anyway, does not drag the exquisite care of the image and, the best, does not end with the final metaphor, with a deaf and blind country before what he had in front of his eyes.

The oriental beauty of Tito

Pixar against life in the suburbs

Is it a claim that they call you “Whore”?