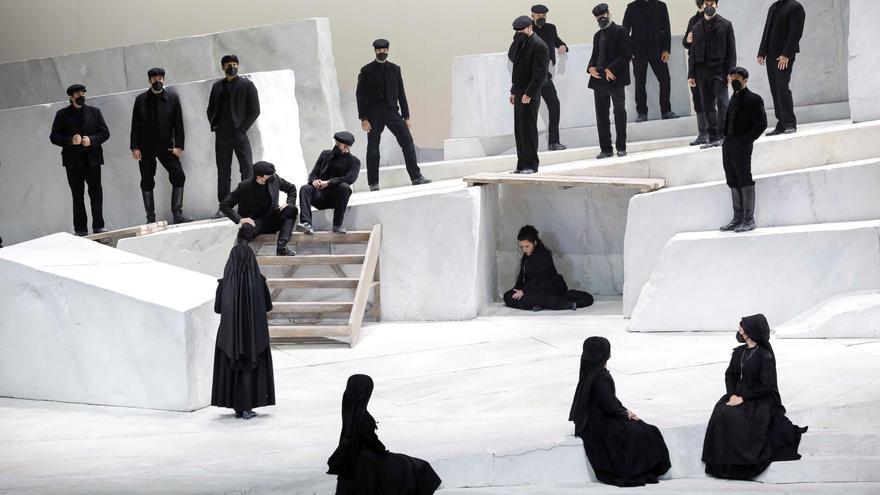 Valencia, May 23 (EFE). The tenor Jorge de león has achieved this Sunday a double triumph at the Palau de Les Arts in Valencia with the interpretation of the roles of Turiddu and Canio in the operas Cavalleria rusticana, by Pietro Mascagni, and Pagliacci, by Ruggero Leoncavallo, two representative works of the Italian “verismo” in which the protagonists are neither heroes, nor kings nor gods but ordinary people of the town who live real stories.

The performance of the Tenerife-born has been excellently complemented by Sonia Ganassi (Santuzza, in Cavalleria rusticana) and Ruth Iniesta (Nedda, in Pagliacci), with extraordinary performances in diametrically opposed characters: the first, a woman who has lost honor after being abandoned by her lover, but whom she does not hesitate to denounce even if it means permanently losing her man; and the second, a woman who leaves her husband, a man older than her who has brought her out of poverty, to go with the young man with whom she has fallen in love.

The stage director, Mario del Mónaco, has brought together the two operas by placing the prologue by Pagliacci at the beginning of Cavalleria rusticana, in which one of the actors announces that the play “intends to show a piece of life”, since what happens on stage could well be part of everyday reality. In addition, in the Leoncavallo opera in Monaco he places three large panels with the mythical photo of Anita Ekberg bathing in the Trevi fountain in the film La dolce vita, by Federico Fellini, one of the most representative of Italian neorealism.

In an attempt to make the verism / realism of both opera more credible, the choir stood on both sides of the stalls, in the first row of the first and second floors, to make the public an accomplice and a partner in what was happening in the scene. This situation accentuated the feeling of “stereo”, although at some point a small reverberation was perceived.

In Cavalleria rusticana, snowy white marble stone blocks framed the scene, in which rural characters wander, dressed in black from head to toe, trapped by jealousy, infidelity and revenge in a traditional and religious society that it is governed by codes of honor, as in the 18th century Sicily on which the libretto is based.

The action takes place at dawn on an Easter day and among the religious rites of Monaco day it includes, as an Easter ritual, a Nazarene with the cross lying down on the way to Calvary and some penitents flagellating themselves with whips.

In this play, Jorge de León plays Turiddu, a young man who has become engaged to Santuzza but continues to court Lola, his ex-girlfriend. Defiant and showing off his infidelity, the tenor moved with the lyricism with which he sang the opening passage “O Lola ch’h di latte la cammisa” and with the feeling with which he expresses his repentance in the final scene “Mamma, quel Vino è generous “, when he asks his mother to take care of Santuzza if he dies in the duel with Alfio, the carter who does not forgive the infidelity of his wife Lola, played by the baritone Misha Kiria, much applauded by the public, as well than the mezzo-soprano María Luisa Corbacho, like Mamma Lucía.

Extraordinary was also the performance of the Choir of the Generalitat, with the prayer “Regina coeli laetare” interpreted with great spirituality.

In Pagliacci, Jorge de León once again captivated, this time as Canio, the clown who discovers that his wife, younger than him, has fallen in love with a man (Silvio, played by Mattis Olivieri) with whom he is going to run away once finish the performance in the town where the comedian troupe performs. Shocking was the interpretation of the final aria “Pagliaccio” by the man from Tenerife.

With characters from the Italian Commedia dell’arte, and with the poster of Anita Ekberg in La Dolce vita as a silent witness, the characters represent in the traveling theater the same story that happens to them in real life, until Canio, laughing at his Shattered love, he decides to end the lives of Nedda and Silvio, while the audience applauds as if the crime were part of the show he is watching.

Jordi Bernàcer from Alcoy, the front of the Valencian Community Orchestra, signed a successful evening with which the Palau de les Arts has put an end to the 2020-2021 opera season, with a program that has gone ahead despite the restrictions imposed by the covid-19 pandemic.