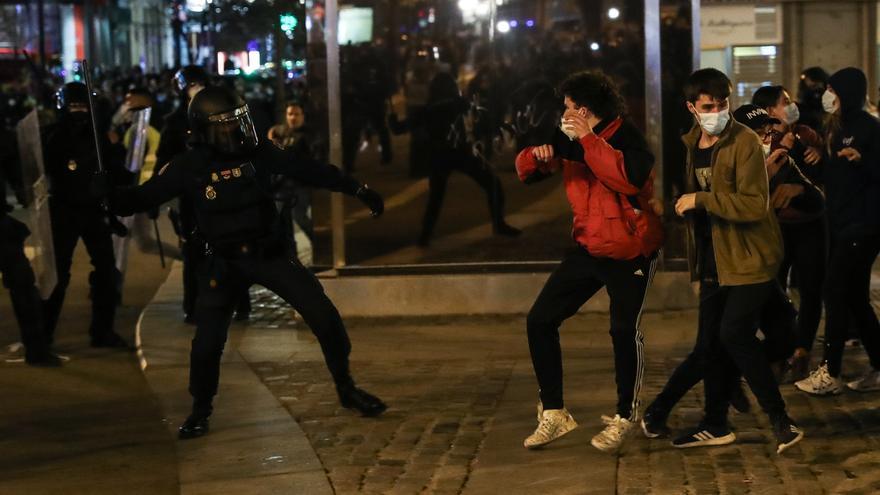 In 2014, a Burgos neighborhood appeared in the headlines of all the Madrid press and television news. Only that was an unusual phenomenon. The residents of Gamonal had been protesting for months against an urban project of the City Council that they thought only made their life more difficult. It did not make national headlines until violent incidents with destruction of street furniture and other damage began to occur. The Interior Ministry dispatched no less than 200 riot police when there was no longer any deterrence from the police presence. The officers had to go there to beat the batons to end the riots. It was the violence that made the whole world know that Gamonal existed, a working-class neighborhood of those that the municipalities do not care much about.

Violence leads to nothing in a democratic society, all the media said. Nothing good, it is understood. Few realized the little hidden irony in that otherwise reasonable criticism. Without that violence, Gamonal would have remained as unknown as before. The mayor of Burgos could have completed the project that benefited the city's construction companies, including one that was owned by a businessman who was well known to the Madrid press. Not for his contribution to the local economy, but for his time in prison on account of a notorious case of corruption and for his control of the city's urban policy. Businessman, by the way, who was the owner of the main newspaper in Burgos (that never hurts in dark businesses).

The residents of Gamonal had spent six months demonstrating peacefully and demanding dialogue from the mayor. They ignored them. When the stones flew, everyone was suddenly alarmed by what was happening there. In the PP, the mayor's party, it was said that you could not give in to violence. "The Burgos attacks," Ana Botella called them. "The machines are returning to Gamonal today without cowering in the face of urban violence", titled January 13 on the cover The Correo de Burgos (yes, it is what they are imagining, owned by another builder), which showed how brave construction machinery is when it comes to defending the rule of law.

A day later, the mayor surrendered to the pressures that came from the national leadership of the PP - why so much negative publicity on a damn street in Burgos - and temporarily suspended the works. Later, the project was definitively canceled. By then, no one was talking about Gamonal and it was not necessary to make uncomfortable reflections on the role of violence.

The images, the debate on violence and the last minute political calculations are now repeated with the demonstrations in Barcelona, ​​Madrid and other cities for the imprisonment of rapper Pablo Hasel for his second sentence. As it occurred in the two largest cities in Spain, there has been no waiting time. The conflict has automatically moved to the front line of combat. Concentrations, police charges, throwing objects at the agents, destruction of street furniture and shop windows, dozens of detainees ... and politicians taking advantage of the play, because something can always be obtained from violence.

Pablo Echenique was very fast. "All my support for the young anti-fascists who are demanding justice and freedom of expression in the streets, "the Podemos parliamentary spokesman wrote on Twitter. He demanded the investigation of" the violent mutilation of the eye of a protester "in Barcelona due to the impact of a foam ball (foam ) launched by the Mossos and tweeted the sticks that several people took in Madrid on Wednesday night ("Echenique launches a video against the Police," El Mundo headlined, as if it were a stone).

A police union responded with a video of a protester throwing a stone that hits hard in a policeman's helmet. Íñigo Errejón released other images in which he is seen An agent calling "fucking whore" to a woman whom he then hits with the baton.

The opposition's reaction was overwhelming. PP and Ciudadanos demanded from Pedro Sánchez the dismissal of Pablo Iglesias, which is the same as the end of the coalition government and the calling of early elections. "It is a grave irresponsibility for government parties to encourage these violent acts, which should have political consequences," said Pablo Casado. The PP sought the melee with Sánchez, because the theme of recent weeks is the differences between United We Can and the PSOE. Anything that is putting more wood in that fire has an irresistible payoff.

The televisions were very clear about their audiences. The morning news shows were almost monographic about the riots. In live shows, he pointed to the broken shop windows and even a half-broken tile on the floor of Puerta del Sol.

With Madrid back to the first classification in the autonomous ranking of Covid infections, this was an opportunity that Isabel Díaz Ayuso could not miss. He was photographed in front of the broken shop windows with the mayor of Madrid and then he went to the plenary session of the Madrid Assembly with a paving stone in hand to do a 'performance' like those that Albert Rivera starred in in electoral debates. Other politicians ignore how important props is. Ayuso really lives for these moments.

He seized the cobblestone angrily - it almost seemed that he was going to throw it - and offered a memorable phrase calling the protesters "a party for kids who demonstrate for a criminal who has less art than any of us who are here with two drinks in one karaoke ". If we must suppose that Ayuso says these things sober in plenary sessions at ten in the morning, perhaps with some caffeine in his body, imagining what it will be like in a karaoke at dawn with two drinks on his body and without having had dinner is something that is priceless.

Ayuso was more condescending to the fury in the streets when he warned the government in May of what would happen due to the confinement imposed during the pandemic: "When the people go out, the Núñez de Balboa thing will be a joke." In reality, the protests in the Madrid neighborhood of Salamanca already seemed like a joke the first time without the need for the second round announced by the Madrid president and that never happened.

Hasel had a first conviction in 2014 for exalting terrorism that did not lead to imprisonment. A second conviction in 2018 was lowered by the Supreme Court two years later to a sentence of nine months. per 60 tweets posted between 2014 and 2020. In September 2020, the Constitutional Court rejected his last appeal, which was to mean imprisonment. In addition, another six-month sentence is pending, which is under appeal, for attacking a TV3 journalist at a press conference. This Thursday, the Hearing of Lleida confirmed another sentence of two and a half years, which will be appealed to the Supreme Court, for threaten the witness of a trial ("I'll kill you, son of a bitch, I'll catch you") of which he also spread his photo on Twitter.

As you can see, not all of Hasel's criminal record has to do with rap or freedom of expression.

To deny that the conflict is a left-right issue, Carmen Calvo and José Luis Ábalos rushed to reject the use of violence. Not just the socialists. The day before, Ada Colau had highlighted that the blow from a burned container - about 50 in Barcelona - is not going to get Hasel's freedom: "Violence is not the way. The altercations will not help him get out of jail and therefore they are not justified ". That's a pretty good estimate. The PSOE will not accept to grant an express pardon if it seems that it is pressured by violence in the street.

United we can has requested "urgent" pardon to the Government for Hasel, which he refuses to do. He prefers that the mobilization continues "so that the State recoils". Nor is it that I have much respect for the leader of Podemos ("the shit of Pablo Iglesias") or by United We Can, because "they are social democrats and communists always remember that social democracy is the left leg of fascism ".

What is pending is a reform of the Penal Code that prevents crimes of opinion from being punished with prison sentences. That also reduces the chances that sentences imposed by Spanish courts will be overturned by the European Court of Human Rights. The two government parties have pledged to carry it out. It was only announced when Hasel's entry into prison was imminent.

In the real world, violence is sometimes the factor that attracts the attention of politicians and the media. It usually happens when time has been spent thinking that problems will solve themselves.

Tags: do the, expression, liberty, violence