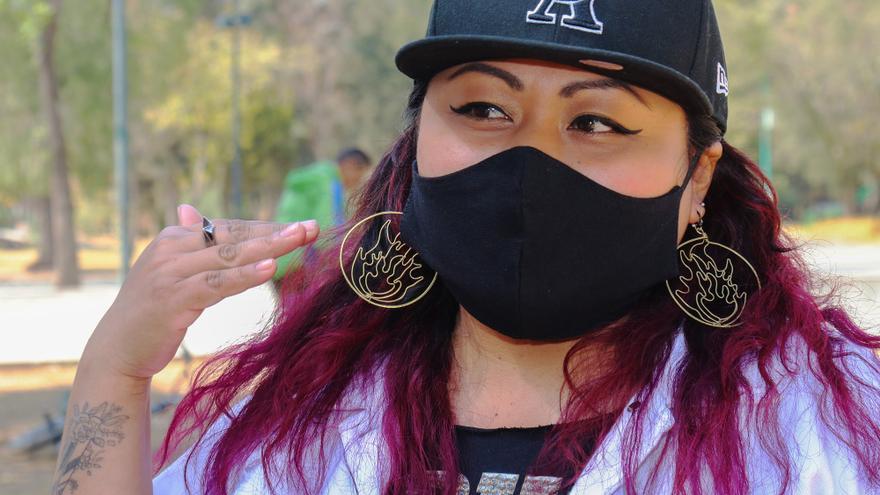 Mexico, Feb 2 (EFE) .- Social issues were always the center of love for rap by Mexican Dayra Fyah, but for more than seven years she opted to relate with her music “the fact of being a woman” in a country where more than ten are murdered every day.

“Let the wine spill, let everyone dance, until the soul heals, surrounding this bonfire, burning what it binds”, Dayra sings this Tuesday for Efe with strength in her eyes and in her voice.

A strength that he reinforces with his words.

“It has been a process that goes there, and it is a necessity to continue saying it, to continue communicating it so that one day the social structure changes and the dynamics may be different: of more love and respect for all,” said the singer from Ecatepec, one of the most populated municipalities in the country and located in the northwest of Mexico City.

For her, rap and hiphop differ in that the latter is eminently social, so one of the “unwritten rules” is that you cannot disrespect.

And Dayra has been on that path for more than 17 years. She started doing graffiti on the streets of her neighborhood but became a mother at 17 and had to re-evaluate her life and the risks she took.

So her graffiti friends were starting to write and she saw that she was also interested, so she soon joined a group.

“I needed to express myself in some way and since I no longer did it in graffiti, in rap I found that other alternative,” he explained.

At that time, he explained, it was normal that there were women in the groups and it was even something “cool”. But later she discovered that all that glittered was not gold, and as she approached feminism and analyzed herself, she saw that there was a long way to go.

“With the passage of time, analyzing the different situations and with feminism, you realize that (my beginnings) were not so fat (so good). Now inside and outside the scene it is even more difficult for them to listen to me for what What do I say, because I know it is strong, because when we listen to music many times we want to relax, “he said.

However, although she encounters barriers and disinterest, for her, who also teaches self-defense, her job is to work to “change something”, no matter how small it may seem, and continue her path according to the values ​​in which she believes.

Although Dayra keeps some songs for herself that she is not yet “ready” to show, she tells crudely episodes of her life or of people she has met.

Dayra takes care of herself but does not censor herself.

And that has also been an “intense and complex” process for her, but one that she does not want to give up.

“Writing personally about feminism is also complex. Feminism is adaptable because we are diverse but it also has a foundation,” she said.

Dayra, who was born in Mexico City in 1987, has been doing what many learned in 2020 due to confinement from the pandemic for some time. He knows how to look at himself in the mirror, identify his strengths and weaknesses, and “work” on his way of being and “relating”.

And to survive this process of exploring within and in turn telling the realities of the periphery, try not to judge yourself. “I try to be very aware of what I say and write what I am feeling at that moment,” he said.

In his concerts, which had to be temporarily separated due to the coronavirus, he lives with fellow professionals such as his admired Audry Funk or Mare Warning Lirika, but also with a very diverse audience in which he sees very varied reactions.

“Normally I find some looks, heads that say yes. But (…) one day even a mother of a femicide victim approached me and felt that she could trust me with her story after the ‘show’. With knowing that a person from one hundred maybe identified is enough “, valued.

Dayra encounters difficulties every day in the world, in her environment and even within herself, she said, but the existence of companions who “are each in her trench saying important things” gives her strength and makes her think that “the people are listening. ”

Especially, it fills her with “life and joy” to hear the roar of the feminist marches, full of young people who have “momentum and the desire to fight.”

“Of course it goes, and we all go. It keeps me hopeful, but always an active hope. We are really building something,” he finished.