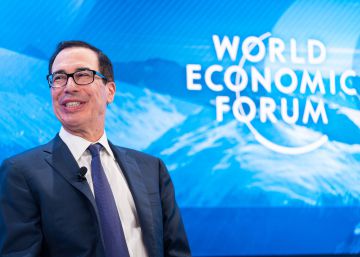 The president of the United States, Donald Trump, again pulls tariffs to address negotiations with the United Kingdom and the EU. Trump threatened his theoretical partners on Wednesday with new commercial rates on cars if they go ahead with their plans to impose a digital tax. Everything, defends Washington, it has to go through the ongoing negotiations in the OECD, which is not expected to be concluded soon. With the same arguments, to different sectors, he has managed to turn France back on a tax that was already under way.

The containment shown by Trump in his speech on Tuesday in Davos It was a kind of mirage. It served to counter the start of the political trial against him in the Senate and to launch his campaign slogans with a view to the November presidential elections. After the first headlines, the usual Trump returns, who brings out his manual the art of negotiation when addressing the following trade negotiations.

One time reached the first phase of the agreement with China – rather a truce, according to experts -, it is time to look for a pact with the United Kingdom and the EU. And before sitting at the table, he launches the threat of new tariffs on some of the most sensitive products for European industry: cars.

“It has been very, very difficult to negotiate with Europe. They have taken advantage of our country for many years. And I have told you that that cannot continue, ”he said in an interview with the CNBC. He defined his meeting on Tuesday with the president of the European Commission, Ursula von der Leyen, as “a great conversation.” “But I told him that if we don’t get something I will have to take action. And the action will be higher tariffs on their cars and other products that we import, ”he added. “The European Commission is tougher than China. They have not wanted to negotiate with other presidents, but they will do it with me, ”he concluded. Trump says he even trusts that the European agreement can be closed before the November presidential elections. Shortly after, but also this year, the agreement with the United Kingdom would be closed, according to its calendar.

Treasury Secretary Steven Mnuchin himself defended Trump’s strategy: “There is no doubt that tariffs have been a great incentive to reach an agreement with China.” The pattern has been repeated with France, which through its finance minister, Bruno Le Maire, confirmed the postponement of the Google rate by the end of the year.

Notice to the United Kingdom

Sitting on a panel of the Davos Forum with his British counterpart, Sajid Javid, Mnuchin warned that if London imposes “arbitrary” fees on US technology companies, as announced, its government will do the same with the British car industry. “International tax issues are very complicated and take a long time to solve. If people decide to apply taxes arbitrarily on our technology, we will value applying arbitrary taxes, ”he said. Javid said that the intention of the Government is to apply the rate in April and eliminate it once an agreement on digital taxation is reached in the OECD.

The OECD Secretary General, Ángel Gurría, met on Wednesday in the framework of the Davos Forum with Mnuchin and Le Maire to try to advance these negotiations. Sources in his environment assured that there was not much progress and that discussions should continue.

Donald Trump did not hesitate, at his farewell press conference in Davos, to lash out at the World Trade Organization (WTO), which he accuses of having a favorable bias against China. Trump said he hopes to do “something very dramatic” in the negotiations to reform the organization in the coming weeks. In that context, he placed the decision of his Government not to renew the judges of the dispute resolution body and to end, with it, the unquestionable role of the WTO as a mediator. The director general of the organization, Roberto Azevedo, lowered expectations about a major reform and warned that the changes should be approved by consensus.