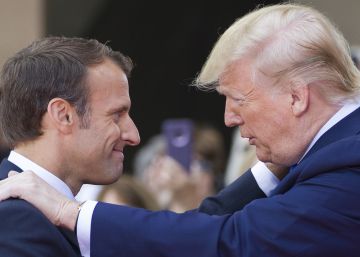 No one buries the battle ax yet, but the idea is not to shake it too much and leave space to find a solution in the long battle for Google rate which has nails in Paris and Washington. In a conciliatory gesture, France has offered to postpone the collection in 2020 of the tax it approved last year for large foreign digital companies operating in its territory. In return, the United States would be willing not to impose new tariffs on French products. The idea, which if approved will be announced on Wednesday in the Davos economic forum, is to allow time for agreement an international tax to be proposed by the Organization for Economic Cooperation and Development (OECD) this year

“It is a possibility on the negotiating table,” a French source close to the negotiations confirmed to EL PAÍS. The idea, he explained, is to “postpone” the rate payments – collections are made in April and November – until December, “to allow an agreement to be found within the framework of the OECD”, Which has always been the stated objective of Paris. Contacts in recent days have been “very regular” between the negotiating teams in Washington and Paris, but the talks are “complex,” he admitted.

France approved in 2019 a levy of about 3% of the turnover of technology companies in the country that earn annual revenues of at least 750 million euros (about 830 million dollars) in their global digital activities. The first charge was made in November, but if the Paris proposal is accepted, it could also be the last. France, which emphatically denies Washington’s accusation that it is a tax to sanction American companies, has been said from the beginning ready to end its Google rate if a type of payment is agreed internationally, a task that has been entrusted to the OECD. France is even willing to reimburse the affected platforms for the difference between the rate charged and the one set.

In exchange for the freezing of charges, the United States will not realize its threat of imposing a tariff of up to 100% on imported French products, such as wine, worth 2,400 million dollars (about 2,200 million euros).

That he had agreed, he was dropped by French President Emmanuel Macron on Monday night, when he announced on Twitter that he had held an “excellent” conversation with the American Donald Trump on Sunday Google rate (which in France they call GAFA, by the acronym of the main digital platforms: Google, Amazon, Facebook and Apple). “Great conversation with Donald Trump about the digital rate. We will work together on a good agreement to avoid the escalation of tariffs, ”Macron wrote. “Excellent!” Replied the US president.

The main negotiators of the agreement, the French Minister of Economy, Bruno Le Maire, the US Secretary of the Treasury, Steven Mnuchin, and the OECD Secretary General, Ángel Gurría, will meet on Wednesday in Davos.

In an event like the Davos Forum, dominated by US firms and the technology sector, the Google rate It occupies the top positions of the agenda. France’s decision to postpone its application until December was received with relief, not only by the companies affected but also because the decision avoids a new trade escalation and an aggravation of tensions between the US and the European Union.

“If it is true that it happens, it is good news. The OECD needs more time to articulate a proposal regarding a digital rate that is acceptable to all. That will prevent the US from imposing sanctions of 2.4 billion dollars on France and that it unleashes a new trade escalation, ”says Chad Brown, a trade expert at the Peterson Institute in Washington. At his side, the Secretary General of the World Trade Organization (WTO), Roberto Azevedo, warned: “This is not going to stay here, this issue has a long way to go.”

Trump held a meeting yesterday with the president of the European Commission, Ursula von der Leyen, who expressed his desire to work with the president of the United States. “I am convinced that we can commit to a positive agenda in the commercial field, but also in technology, energy and many other areas,” he said in a statement after the meeting. “We have been working on it for a while and hopefully we can achieve something important. An agreement with Europe is something we all want to achieve, “said the US president. Shortly afterwards, Trump thanked the decision to his French counterpart, Emmanuel Macron:” The United States is very happy with the result and we very much appreciate what the president has done Macron. “

The PwC survey of executives published on Monday reveals the high concern among executives about the seemingly inevitable end of the current technological development model. The majority of executives surveyed predict that they will begin to regulate both the content and the structure of the Network, the breakdown of large companies to reduce their power and the establishment of some type of compensation for the use of personal data. “If the global economy wants to implement the expectations generated by the fourth industrial revolution, it will take more coordination on all these issues,” concludes the consultant’s report.