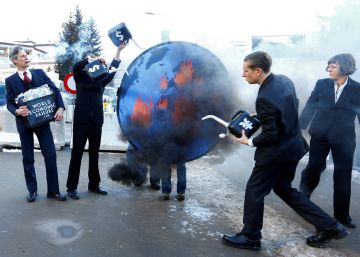 Europe rules when it comes to attracting and retaining the best professionals in the world. Not only is Switzerland leading the ranking, as usual, but of the 20 countries best placed in the Global Talent Competitiveness Index (GTCI), which are prepared annually by Adecco and the Insead business school within the framework of World Davos Forum, only six are outside the continent: United States and Singapore, located in second and third position, respectively; Canada, New Zealand, Japan and Israel. But Spain does not slip between them. It occupies the 32nd position of the classification (in 2019 it was 31), which has gone from 125 to 132 countries analyzed, representing 97% of world GDP and 94% of the population.

Spain improves “minimally” in the variables analyzed, according to the authors of the report, among which in this seventh edition there is also Google. But having analyzed more countries, their position descends one step. And all this despite the fact that political stability has dropped 11 points and the effectiveness of Government 4 compared to 2019. Its worst score, no less than 118 in the world, is obtained in the opportunities that organizations offer women to Become directives. On the other hand, the best comes from the hand of the large enrollment of university students, the sixth highest, and the quality of Spanish business schools (10).

The GTCI, which was presented this morning in the Swiss town where the global economic elite is gathered, weighs 70 indicators divided into six main pillars: facilitators, recruitment, growth, retention, technical skills and global knowledge. Spain only stands out in one of them: it is an expert in getting talent to remain in the country, but not in attracting international brains (in fact, it is the marker where it regresses most in the last year).

The retention of professionals is the strong point of Spain, where it appears in number 23 of the classification. What contrasts with the difficulties encountered by the most advanced nations in the index at this point. Of course it has more to do with the living conditions and endowments of the country than with the strategies of the companies so that the talent stays at home. With environmental behavior, good sanitation networks, the number of doctors, social protection and personal safety. Because the lack of policies for the best brains to remain in national territory means that the note in the specific indicator of talent retention is not as good as in the set of indicators, which refer more to the lifestyle.

However, where our country is worse off in this list is in the section of professional skills and technical personnel, which is placed in position 53. The low relevance given to the education system in the economy, the great The number of workers with low levels of education and the low presence of professional training graduates undermine the employability of Spaniards. Because, although the country produces a large number of university students, it has great difficulty finding a place in the labor market. In fact, unemployment among these graduates is among the highest in the countries analyzed (92). It also figures poorly in the relationship between salary and productivity (99).

The map of Spanish talent continues to have the same structural problems as when the GTCI began to be made. And for more variables that incorporate the analysis of the center of studies and dissemination of the human resources company (Adecco Group Institute) and Insead, do not blur. Not even once markers have disappeared from the index as the difficulty to fire, in which Spain traditionally left very badly.

The European countries with the highest incomes are the ones leading the ranking, the ones that best manage talent. In addition to Switzerland, Sweden, Denmark, Holland, Finland, Luxembourg and Norway. And according to the Global Talent Competitiveness Index 2020, the gap between the leading nations and the rest is growing. The adoption of each other’s technology has a lot to do with it. Artificial intelligence experts are scarce and unevenly distributed. More than half of the world’s developing population lacks basic digital skills, says the report, which highlights that the incorporation of automation in public and private institutions is the challenge to bridge this gap. “With this in mind, the Adecco Group is committed to improving skills and recycling five million people worldwide by 2030, equipping individuals with future skills that will allow them to thrive in the era of artificial intelligence.” , announced Alain Dehaze, CEO of Adecco Group in the presentation.

At this point, Spain is again halfway between the best and the worst. It is the 14th nation in the world in terms of robot density, but drops to 54th in its investment in emerging technologies.

Cities have become key players in competitiveness for world talent. The GTCI expands its focus on them in this edition by comparing 155 cities around the world instead of 114 as in 2019. They dominate the ranking of metropolitan brain management that have favored the development of advanced technologies. That is why they are headed by US cities, which do not weigh so much on a mostly European sample. New York, London, Singapore, San Francisco and Boston lead the GTCI. Only Paris and Munich join the capital of Brexit in the top 10, which also includes Hong Kong, Tokyo and Los Angeles.

Madrid, Barcelona, ​​Bilbao and Zaragoza are the Spanish capitals registered in the study. Barcelona has made a great leap, advancing 20 positions in the last twelve months, to be among the 30 most competitive metropolises in the world in brain management. It is placed in the 29th position, behind Madrid, which occupies the 24th place. But Bilbao and Zaragoza go back until they fight in the top 90.