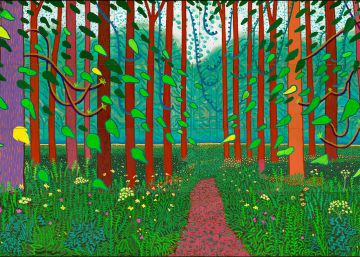 David Hockney He is a painter passionate about technical innovations, always wondering about ways to renew the ways of representing the real (from the Polaroid to the photocopier). In 2011 it crossed paths with the tablet and he had an inner pocket sewn on all his suits so he could always carry his iPad with him. As if it were a portable study. “People believe that technique replaces the hand. It is not so clear. […] Look at this drawing: it is made for the screen, with the means of the screen, the light of the screen and it has been made entirely on the screen. It is not an illusion. It really is what it is, “says the British artist, with the iPad in hand, to Jean Frémon, president of the Lelong Gallery, in a dialogue included in the book Love life (Elba).

His curiosity pried into the technical methods used by the ancient masters. His conclusions about how they made some myths to represent reality raised blisters: he is convinced that Vermeer used a camera obscura – a technique of the mirror in the shadow that reflects a highly illuminated scene – to copy real scenes with the greatest accuracy. “And he hasn’t told anyone,” says Hockney since 2001. “Art historians have not asked much of the question. But painters know that, “he adds. He does not doubt that the artists kept the secret once they mastered the optical instruments, to produce images without stopping. Although Vermeer was not one of the rapids, he does think he did it to save time and, above all, to capture an expression. He comments that the expressions are fugitive and if you want to catch the eyes and the mouth at the same time, “you better hurry up.” But this technical phrase does not cover the artist’s skills. “If you’re a bad cartoonist, the drawing will be bad,” says Hockney. The debate on the use of the camera obscura as a shortcut brought him many criticisms, but it was not settled.

The basic claim of the British artist was to applaud the end of “the optical tyranny” and the liberation of the painting from reality, a fact that occurs from 1839 with the arrival of photography. At least he lives it as a relief, because he prefers to experiment from memory, with fast and powerful portraits, barely sketched, forcing the limits, the definition and the importance of the truth. Turn accuracy into a powerless resource. Loyalty is much better. That is why Hockney, the painter who has become independent from reality, is an artist in constant expansion, who translates everything into size cinemascope. Giant. There have been many Hockney’s since the one who signed Self-portrait of the artist (Pool with two figures), in 1971, until the landscaper of the Ipad, with whom he painted the spectacular The Arrival of Spring in Woldgate, East Yorkshire in 2011 (kept at the Pompidou Center in Paris). But he is the only one capable of snatching from time to time Jeff Koons the throne of the most sought-after living author. The explosion of colors – and of visual pleasure in which he delights in the new means of deception – has strong roots in classical painting. “Rembrandt has everything a teacher needs to have: the hand, the eye and the heart,” he says. Hockney drives a red convertible Mercedes on Mulholland Drive (Los Angeles). What can you fear?

Virtual visit: The Arrival of Spring in Woldgate, East Yorkshire (2011), by David Hockney, at the Pompidou Center (Paris).