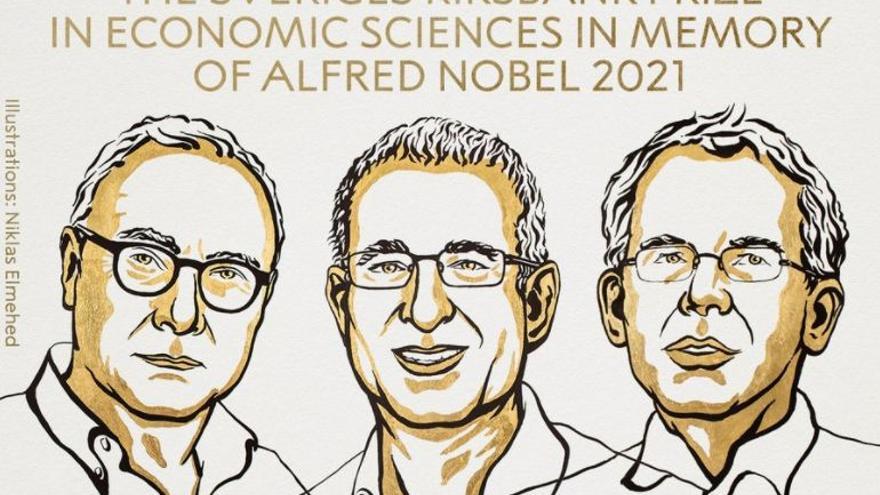 Economists David Card, Joshua D. Angrist and Guido W. Imbens have been awarded the Bank of Sweden Prize for Economic Sciences in memory of Alfred Nobel, popularly known as the Nobel Prize for Economics, as announced on Monday by the Royal Swedish Academy of Sciences.

“This year’s awardees David Card, Joshua Angrist and Guido Imbens have provided us with new insights into the job market and shown what conclusions about cause and effect can be drawn from natural experiments. Their approach has spread to other fields and revolutionized empirical research “, stated the Academy.

In this way, the three winners happen in the winners of this award to the economists Paul R. Milgrom and Robert B. Wilson, winners of the Nobel Prize in Economics in 2020.

The Swedish organization has highlighted the work of David Card for his “pioneering” research together with the late economist Alan Krueger who questioned for the first time the previous current that argued that the increase in the minimum wage caused negative effects on employment. His “surprising” conclusion, the result of a study in the United States, led to much more research on the relationship between minimum wages and employment, also from Card himself, who have mostly ended up concluding that the negative effects on employment are small. , have highlighted this morning from the Swedish entity. In 2014, Card received the BBVA Foundation Frontiers of Knowledge Award in Economics.

Regarding Angrist and Imbens, the jury highlighted that their work “has shown the conclusions about the causes and effects that can be drawn from natural experiments. This has spread to other areas and revolutionized empirical research.”

The Nobel Prize in Economics is not part of Alfred Nobel’s legacy, since it was established in 1968 by the Riksbanken, the Swedish central bank, coinciding with the 300th anniversary of the entity, and was awarded for the first time in 1969, distinguishing the Norwegian Ragnar Frisch and the Dutchman Jan Tinbergen.

It is one of the most masculinized awards, with only two women awarded in its history: the American Elinor Ostrom in 2009 and the French Esther Duflo, in 2019. Since its inception, more than half of the winners in this category have been Americans like Angrist and Imbens. The three winners in this edition work and research in US universities.