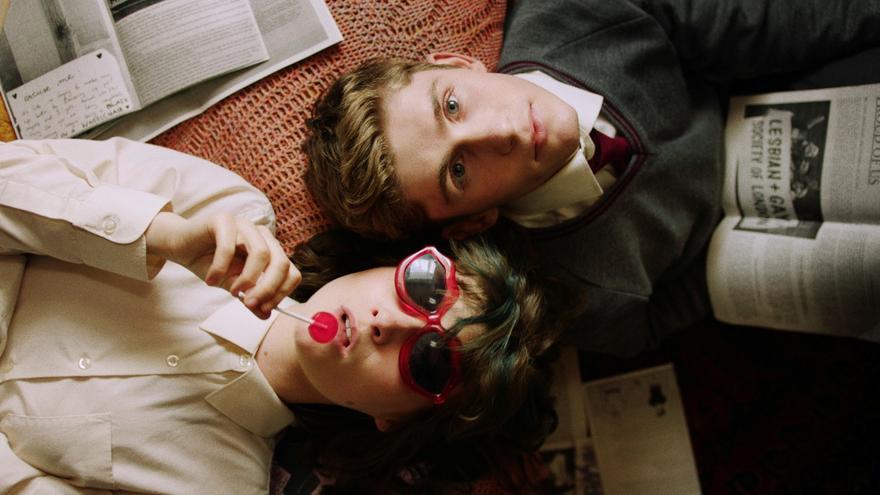 Madrid, Feb 24 (EFE) .- Adolescence is a complex stage, but if you are also gay in a town in Ireland at the beginning of the 90s, as happened to director David Freyne, the problems grow. His own experiences, a little imagination and the humor that allows the passage of time have resulted in "Dating Amber".

Presented at the last Gijón Festival, the film will hit theaters next Friday. Freyne completely changes the register after his debut with the terrifying "The cured" (2017) and now tackles "a platonic love story" between a boy and a girl who pretend to be a couple to avoid being harassed by their high school classmates. cause of rumors about her sexual orientation.

"For me it is a romantic comedy between two teenagers who forge a friendship, fall in love and help each other to be who they want to be and even if it is platonic it is their first love," he says.

The structure is also one of romantic comedy and among the films that inspired him, he quotes classics of the genre such as "Something to Remember" or "When Harry Met Sally", references seasoned with a soundtrack that includes rock hits from the 90s and current Girlpool, Pulp, U2, Aslan or Pillow Queens.

The story takes place and was shot in the city of Kildare, the same city in which the filmmaker grew up. "It is a military city, south of Dublin, small and surrounded by countryside, it is a peculiar place, away from everything and with a lot of uniformed men everywhere, that gives it a strange and surreal air but also very beautiful."

Set in Ireland in the 1990s, the events take place just a couple of years after the country decriminalized homosexuality in 1993, helping to better understand the still repressive environment of the time.

"Ireland was a very Catholic and conservative country but it was beginning to change," explains Freyne, "the film is set right at the beginning of modernity, but fear and conservatism were still very ingrained and made things difficult for young people. , women and the LGTBI community especially ".

The cast is led by Lola Petticrew and fellow Irishman Fionn O'Shea, whose popularity soared last year as a result of their participation in the series "Normal People", an adaptation of Sally Rooney's novel.

"The truth is that with the virus and the restrictions, I am not experiencing popularity much," says the actor in a videoconference from Dublin, where he has returned due to the pandemic, "but I loved doing that series, it was a dream come true" .

O'Shea has also participated, along with Tom Holland, in "Cherry", the new film by the Russo brothers - directors of "Avengers: Endgame" or "Captain America Civil War" among other titles in the Marvel universe.

"We premiere next month, I'm looking forward to people seeing it," says the young actor who plays Arnold, a soldier who served in Iraq with the protagonist. Curiously in "Dating Amber", his character is the son of a commander and his destiny also seems to be the Army, for which he trains.

"The difference is that in Dating Amber I'm not a very good soldier," he jokes, "the rest of the characters that appear in the training scenes were real cadets, so I didn't even have to act because I was really the slowest and the most weak".

Although O'Shea was born in 1997, in Dublin, he believes that anyone can relate to what happens to the protagonists of "Dating Amber". "Things have improved, but it is still difficult, when I went to high school there was still a lot of homophobia in behavior and language, there is a long way to go."

Freyne, the director, confesses that he was surprised by the emotional involvement of some actors who did not live at that time. "Many had stories of harassment and discomfort due to the homophobic language that survives, although things have changed, 'homophobic bullying' continues to happen in schools and outside the cities is even worse," he highlights.

"Coming out of the closet is always a difficult journey and we must not underestimate how difficult it remains for kids today."