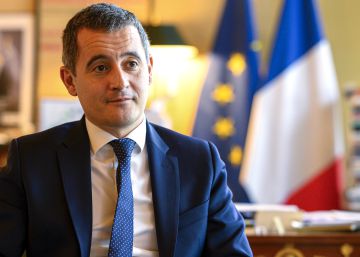 Of his youth summers in Ampuriabrava, Gérald Darmanin retains a correct Spanish and a feature that makes him unique in the French Government. While other colleagues in the Council of Ministers trained in elite schools, worked in senior management or prepared a career in banking, the minister of Action and Public Accounts, who visits Madrid on Wednesday, earned money in the Catalan coastal town working as a waiter in bars and restaurants in summer.

Darmanin (Valenciennes, 1982), beyond its formal performance, exerts a double symbolic function in the Emmanuel Macron team. It is one of the anchors of a centrist government in the traditional right, its political family of origin, and, at the same time, a sensor to connect with the popular classes: the country of yellow vests. Because this is Darmanin's France, the son of a cleaning woman and a father who ran a bar, and a field politician with ambitions. Former mayor of the city of Tourcoing, in the industrial north, where he has become accustomed to dealing with the extreme right, some see him already pointed much higher than his current position.

“You have to listen even more to the people who, as I said (the writer and minister) André Malraux, take the subway at five in the morning: those who earn 1,000, 1,500, 2,000 euros, those who do not get ahead, those who They have children and pay an expensive rent, those who fail to become owners. They have the impression that their children will have it harder than them in life, ”says the French minister in his office in Bercy, the headquarters of the ministries of Economy, Finance and Budgets, in Paris.

He has come to Madrid to learn, although, when he arrives in full election campaign, he will avoid political meetings. “If I go to Spain it is also to be inspired by the measures taken by various governments: this is the case of the fight against fraud,” he explains. “Spain has launched an electronic invoicing for VAT. VAT fraud is very important, the European Commission has assessed it at 9,000 million euros for France ”

Darmanin, responsible for the budgets in France, claims what he calls the "popular right." One of his mentors was President Nicolas Sarkozy. "I think that social progress does not work without the creation of wealth: before sharing the cake, it must be manufactured," he summarizes. And it is from this perspective that defends the balance of Macron and his Government that just reach the equator of his five-year term.

No, says the minister, Macron is not "the president of the rich," as the label says that cannot be detached. "He is rather the president of employment," he defends. “I am from the generation of unemployment. I am the son of the Mitterrand generation and Chirac”, He says, referring to the two presidents who ruled in Darmanin's childhood and youth and under whose mandate mass unemployment settled in France.

The key, according to Darmanin, is the environment business-friedly created in these years by the centrist Macron. Appointment from the labor market reform to the abolition of the fortune tax. Rights policy? “You have to share the fruits of the work: perhaps this is considered to be leftist and, in this case, I am. But first you have to create wealth and it is the companies that create wealth and employment: and here you can say that this is rather right. In fact, both complement each other, ”he replies. "It is the company that creates employment, which lowers unemployment, and for this you have to lower taxes: it works."

Today the unemployment rate remains high, although it has fallen: at the end of the year it should be around 8.3%; at the beginning of Macron's mandate it was 9.6%. The budget balance in 2022, one of Macron's promises, must wait. "At the beginning of the five-year period, the situation was better: we thought that growth would continue to be very high, at 1.7%," Darmanin justifies. And he adds, referring to the response to the yellow vests crisis: "We have lowered taxes to accompany the social crisis." In 2017 the deficit was 3.4%; in the 2020 budget it should be around 2%.

The minister guarantees that the pace of the reforms –the next one is that of pensions– It will not stop. "It's not what we do," he says. "It is a train of reforms without equivalent in the history of the Republic." When a year of the yellow vest revolt is about to be completed, the possibility of further protests is a mystery. "Social meteorology is very difficult to predict," he acknowledges. “We have to continue doing what we have done: listen to the people and, at the same time, tell them the truth. And the truth is that we must work harder, that we are competing with the Chinese, the Indians, the Americans, and that Europe must remain united. ”

The threats are there. The minister quotes the Brexit. And he underlines, in an indirect suggestion to Germany to relaunch growth, that "the way our German or Dutch friends use the fruits of growth, their budgetary surpluses, will also have an impact." To this he adds "trade tensions between the United States and China and geopolitical risks in Saudi Arabia, Iran and Turkey." And concludes: "The weather is beautiful but there are risks of cloudy sky."

«We will review how we deliberate, how we measure and how we communicate»

Cimic: The Australian subsidiary of ACS suffers losses of 400 million in the Middle East | Economy