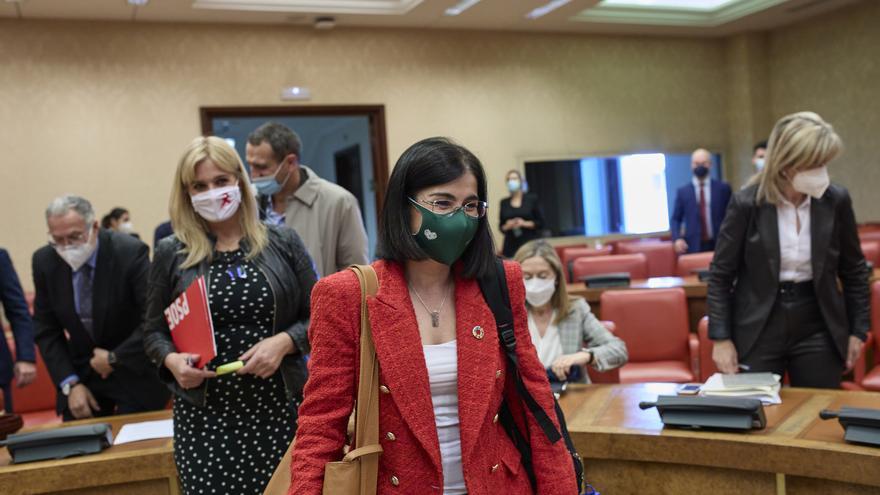 The Minister of Health, Carolina Darias, has intervened in the Health Commission of the Congress of Deputies and has reiterated the Government's intention not to extend the state of alarm beyond May 9. "We will work hard so that the state of alarm is no longer necessary," he said. Yesterday, in the Interterritorial Council of the National Health System, he also expressed it this way. The minister even rules out that the state of alarm, which was implemented throughout Spain at the end of October, can be extended or decreed only in some territory. This could be the case, for example, in the Basque Country, which is going through an epidemiological situation of extreme risk and for this reason its Government has openly asked that the alarm not end. Castilla y León, Galicia and Castilla-La Mancha have also done it. "The state of alarm has worked" during these months, Darias said in Congress, but as of May 9 they want to continue without it and will maintain public health measures "with the usual mechanisms of the Constitution."

The autonomous communities lose, without the state of alarm, authority to adopt, above all, two prevention and containment measures: the curfew and the perimeter confinements. They can take them with the Organic Law of Measures in Public Health in hand, but they need judicial authorization, and the justice has to guarantee that they are duly justified. Justice has already knocked down measures of this type on several occasions without the state of alarm, for example, the confinement of a region of Lleida in July 2020.

To avoid situations of this type, the Generalitat de Catalunya is looking for a legal rearm. It is the first autonomous community that has taken a step in that sense, and prepares a decree-law that modifies the autonomous Public Health law that shields it from the Superior Court of Justice of Catalonia if they want to implement a curfew or confinement. Said decree-law would be drafted in a way that unequivocally endows the Government with the power to demand from the judges any necessary restriction to contain contagions and the evolution of the pandemic. However, sources from the Generalitat have explained to this newspaper that it is a question of having the legal instruments, but that for the moment there are no concrete measures decided, and they emphasize that in any case it would always be at the expense of the judicial guarantee, informs Arturo Puente.

During the question time of the parliamentary groups of the Commission, Carolina Darias has been asked in this regard on several occasions. Yesterday, after the Interterritorial Council, the Minister of Health admitted that some regional councilors of her branch with whom she had met had raised the need to have "tools" beyond May 9, without specifying which ones, only "the desire and the need to have them. " Today, Thursday, the Lehendakari Iñigo Urkullu has proposed that the alarm be extended throughout Spain for two months. Emiliano García-Page (PSOE), president of Castilla-La Mancha, has asked that it be for a month. The Government rules out this, President Pedro Sánchez has also declared it in recent days.

"The declaration of the state of alarm has worked. We have reached a difficult balance between the protection of health and the guarantee of rights. All the public powers have lived up to the sacrifice, responsibility and civility that the citizenship of the country has demonstrated. "added Darias. He has also listed the plans that the Government has to continue to face the pandemic. It will have the State Vaccination Strategy, the Strategy for Early Detection, Surveillance and Control of COVID-19, the Early Response Plan, the Protocol for the Integration of Genomic Sequencing in virus surveillance and the Strategy for Coordinated Response Actions for the control of the transmission of the coronavirus "to continue saving lives and recover normality as soon as possible." It has also valued the Interterritorial Health Council, which will continue to meet after the end of the alarm. Darias is confident in the advancement of vaccination. Currently, more than 50% of those over 60 have at least one dose, and more than 15 million have been administered.