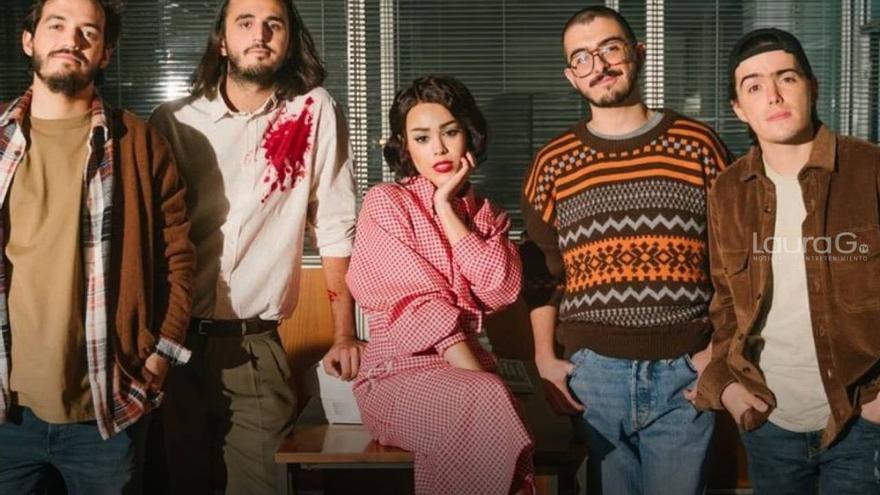 For him Colombian foursome Morat having composed the song ‘Idiot’ and recorded his video with Danna Paola It was a “particular” experience in which they were able to take advantage of the career and talent of the Mexican actress and singer to “do something different.”

“The fact that Danna was an actress opened a huge door so that we could get fully into the video and take advantage of this to do something different. I think in the end it is something that our public has been asking for a long time ago, “Martín Vargas, the band’s drummer, tells Efe in an interview.

In that sense ‘Idiot’, released on June 3 and with more than 10 million views on YouTubeIt was a “particular” experience because it is the first time that the four members of the band decide “consciously” to act in a video clip.

“Acting is something that is learned (…) We neither classes nor practice have. So I think it was like touching the water with the toe with the intention of eventually doing it a little more, also preparing a little more if it is done “, assures Simón Vargas, Martín’s brother and member of Morat.

The artist states that another of the ideas in the video was that “Danna Paola will also shine for her gifts“of acting, because they do not always have the opportunity to have a person as talented as the Mexican in their audiovisual productions.

The song was composed by Morat, Mauricio Rengifo and Andrés Torres, as well as by Danna Paola who added her part when she accepted the proposal from Juan Pablo Isaza, the group’s main singer, to participate in this collaboration.

In addition to this work, Morat has done throughout his career, which took off in 2015, a series of collaborations with artists such as Juanes, Álvaro Soler, Paty Cantú, Antonio Carmona, Sebastián Yatra and Alejandro Fernández, among others.

This, Martín confesses, is a very interesting “musical exercise” because they, being “four guys who play instruments”, have the possibility of accommodating themselves to the different rhythms and sounds, which allows them to reach an audience not so close to the pop they play.

“Besides the most artistic and musical part, I think there is a clear example that the urban genre has taught us and it is that the collaborations are brutal, people enjoy them a lot and it is working as a team and adding more people, combining audiences, “he says.

Likewise, this has opened up the possibility of “fulfilling their youthful dreams” of singing with artists they admired in their childhood and that is why “many collaborations will continue to come.”

Back to the stage

The next July 30, with a concert in Valencia, the Colombian group will return to the stage on the tour ‘Where are we going? Tour 2021 ‘, in which he will visit 10 other Spanish and 14 American cities, the last of them Miami on October 24.

For Simón it is “a privilege” to be able to present himself before his public after the stoppage caused by the covid-19 pandemic and both Spain and USA they were the countries chosen to do it because “they are more advanced in vaccination” and protocols have been designed to make the concerts safely.

“We are organizing ourselves to have the best possible concert, an incredible concert to tour now in Spain and the United States and also with the idea that they will be able to play in Latin America more frequently, “he says.

In this sense, Martín asked his Latin American fans, especially Mexicans and Colombians, “a little patience” because they will schedule concerts when “it is safe for everyone.”

The essence of Colombians

For Morat live performances are very important because their main facet as a group was linked to concerts and when the pandemic they were “a bit lost” because they had never thought of disseminating music in other ways.

“That caught us very cold and we did not know what to do. We had to do a very conscious exercise of resuming social networks strongly, of doing dynamics with our fans to maintain the connection, because, I insist, our main connection with the people who listen to us it was through the concerts, “says Isaza.

The band glimpses with hope and emotion the future in which their third studio album appears, which will feature singles published in recent months and songs that have not yet seen the light.

“Several unreleased songs are coming and that is the beauty of this third album because in the long run that feeling of novelty and surprise that an album can have is maintained “, concludes Juan Pablo Villamil, the fourth member of Morat.