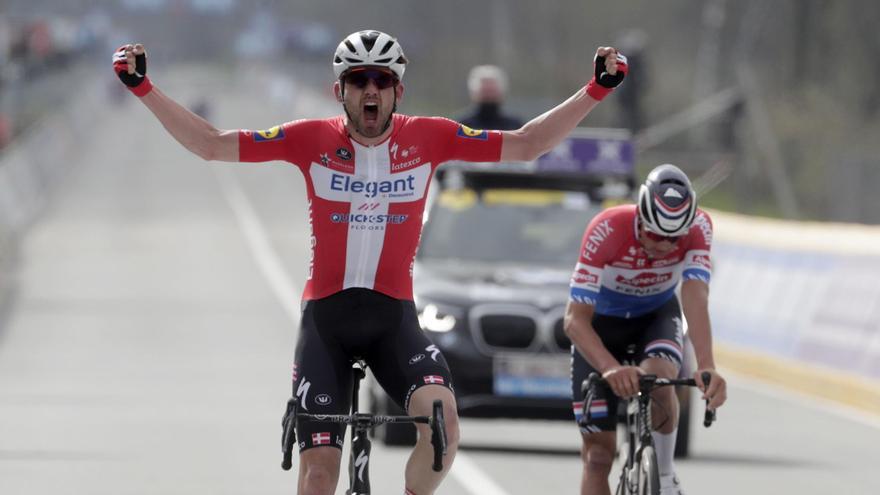 Danish Kasper asgreen (Deceuninck Quick Step), became a real lion in the duel with the Dutch Mathieu Van der Poel, to proclaim himself the winner of the 105th edition of the Flanders Tour disputed between Antwerp and Oudenaarde over a route of 254.3 kilometers.

Asgreen (Kolding, 26 years old), leading a team called ‘Elegant’ just for this race, won the second monument of the year in a passionate duel with the defending champion, winner of the Strade Bianche and great favorite, the great Van der Poel, who yielded to the Nordic to the sprint 50 meters from the finish line, already broken.

The new ‘Lion of Flanders’, a 1.92 meter giant national champion and recent winner of the E3 Harelbeke, attacked on the walls and endured the claws of his rivals at all times until he was alone with Van der Poel, in a race of elimination. He raised his arms with a time of 6:02:01. Third place went to Belgian Olympic champion Greg Van Avermaet ((Ag2r Citroën), 33 seconds behind.

The 105th edition of ‘De Ronde’ rigorously released the new UCI regulations. The race judges They expelled the Belgian Vergaerde (Alpecin-Fenix) and the Kazakh Fedorov (Astana-Premier) for getting involved in the middle of the race, with jostling and irregular maneuvers. Later, the Swiss Schar took to the streets for throwing the drum into the gutter in the wrong place.

Controlled leak that reached a maximum rent of 12 minutes, until it was descending as the 19 walls and paved areas were chained along the Flemish route. Deceuninck’s ‘Tractor’ Tim Declercq (Deceuninck) set the pace to cut time and illusions from the rebels.

A declaration of intent from Alaphilippe’s men supported by Van Aert’s Jumbo Visma and Van der Poel’s Alpecin. On the Berendries hill (km 160), the group’s delay had dropped to 5 minutes, already in the phase of full acceleration, nerves, some falls and deployment of strategies.

In the second pass through the Kwaremont, at 64 from the finish line, the battle was taking color. The peloton was breaking down at times, with the escape of less than two minutes kept in front by the Swiss Bissegger. A fall affected AlaphilippeBut the Frenchman arrived in time for the shocks to come.

The first of them in charge of Van der Poel, who decided to test the rivals 55 from goal. The 2020 winner did not take off, but selected a group of 20, including Ivan Garcia Cortina.

Unleashed career. Going up for the first time the Paterberg struck again Van der Poel, marked by Kasper Asgreen, who annulled the initiative. Then Alaphilippe tried following in the wake of the British Pidcock, linking with the initial group of the escape and taking down Van der Poel and Van Aert, condemned to pursue.

At the Koppenberg, on 22 percent ramps, Alaphilippe caught up with Bissegger, unleashing a blast similar to that of the last edition. The Frenchman wanted to solve from afar, but his great rivals threw the glove on him, forming a leading group of 8 men.

The hot zone of the ‘Ronde’ was coming. On the Taaienberg the inexhaustible Van der Poel attacked again. This time the pull put the Dutchman in front with Van Aert, Alaphilippe, his teammate Asgreen, Dylan Teuns and Marco Haller. The most select in the role of protagonists.

Deceuninck had two bullets. One of them, Asgreen, struck a claw before the third pass through the Kwaremont that exposed the weakness of her leader Alaphilippe, off the hook. The Dane entered the brawl with Van Aert and Van der Poel, attentive to the attack. The three were going to play for glory in Oudenaarde.

The last steps remained through Old Kwaremont and the Paterberg. Three men for the glory of Flanders. Another time Van der Poel shot up the Kwaremont. He struck down Van Aert, who allowed himself to be overtaken by the pursuing group; not so to Asgreen, defiant before the Alpecin monster, always ready to fight.

Duel between the two strongest in Flanders on the Paterberg. The two understood each other, replaced each other and “agreed” to risk glory between them. The time to decide has arrived. The marking began. Van der Poel watched, controlled; Asgreen was waiting.

Van der Poel attacked first, from a distance, about 250 meters from the banner. Opened a few meters, but Asgreen caught up with him, challenged him in the effort for speed and ended the 2020 victor’s stamina, who stopped pedaling before the Nordic gale. An elegant triumph.