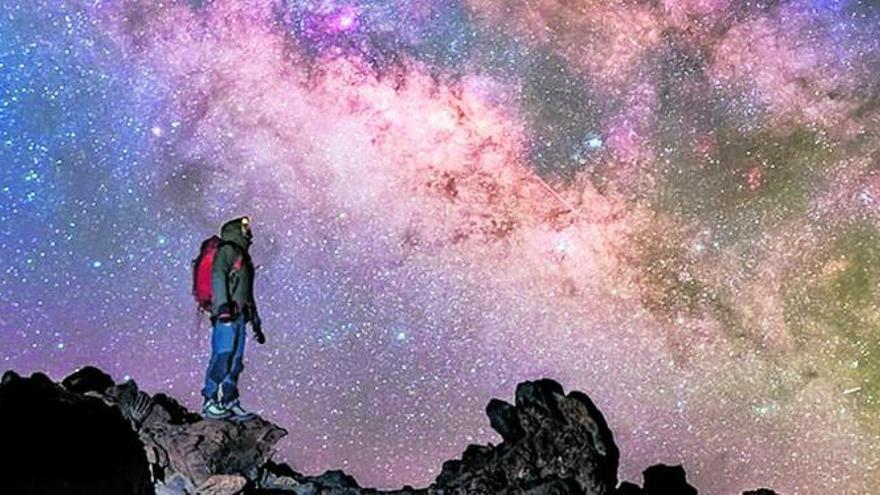 Daniel López was born in Paterna del Campo, a small town in Huelva, 44 years ago. Taking his first steps through life, he realized that the Earth was too small for him and he wanted to explore the universe. "When I was eight my father took me to see the Meteor Showers, I loved it," he recalls. At that time he had to limit himself to seeing as far as he could see, until, at the age of fourteen, he had his first “good” telescope. At that moment, with the curiosity of a teenager who has everything to learn, he began to research and learn about astronomy. However, what he saw through his telescope did not match the images of colorful nebulae he found in books. "From my telescope they looked small and in black and white, I did not understand why and I began to document myself, before it was more difficult, I did not have a Google that told me everything." Thus he discovered that he had to connect a camera to the telescope in order to capture colors that were otherwise impossible to see. With his "good" amateur telescope, Minolta cameras and telephoto lenses that his father, who was fond of nature photography, discarded, Daniel began in the world of astronomical photography.

So much attraction to the sky could only lead to a career in astrophysics. He started taking it, but dropped out before finishing the course because he realized that what he liked were "little gadgets". "Astrophysics was very theoretical and I liked the technical part," so he decided to try engineering. He studied between Huelva and Seville without abandoning his passion for astronomical photography and filling himself with knowledge to apply to improve his images. Engineering allowed him to build his own instruments such as a slide (device to move the camera horizontally) and cranes to perform timelapses. "Before there were no motorized slides and those that did exist, I had to buy them in the United States for four or five thousand euros, so I started to motorize them myself," explains López.

The Huelva astrophotographer arrived in the Canary Islands by chance, but never left again. He was captivated by one of the best skies in the world and nowadays he refers to the Islands as his home, “I was not born here, but I have been here for so many years that I feel as if I was”. Shortly after finishing university, while working as an engineer in Seville, he applied for an internship as a Telescopic Observation Technician at the Teide Observatory, “I had no hope, because I had no astronomical knowledge”. But they took him, a two-year contract allowed him to capture his first images with large telescopes and he became part of the astrophotography group at the Instituto de Astrofísica de Canarias (IAC). "In those years I took many photos, I began to make myself known and published in National Geographic."

The end of the contract put him at a crossroads, "I had to decide whether to go back and work as an engineer again or to dedicate myself to this, which I loved." He decided on the riskiest option, "but I had the endorsement of the publications in the magazines and they knew me at the Teide Observatory, they had no one to take photographs for dissemination, and I also had contacts at the Institute of Astrophysics" .

In 2009, Daniel López registered as a freelancer to dedicate himself to photography. "In the end I decided to dedicate myself to something so difficult, and that at that time hardly existed, which was to be a professional astrophotographer". Since then he has worked in places such as the Teide Observatory, the IAC, different councils or the AEMET.

In search of the perfect image

Each job requires specific materials and a certain duration. "The time it takes to take a photograph of the sky varies a lot depending on what you want to capture," he explains, "for example, the ones I take for the Observatory may require a week, which is equivalent to an exposure of forty hours." The problem is that the objects are never static in the sky, if you want to capture a certain moment, maybe it is only visible for five hours in a night, then you have to repeat the exposure night after night until you reach the required accumulation of minutes. . "This is the only way to get images with that depth and that amount of detail," says the photographer.

The same thing happens with the materials, “I have my cameras, my tripod, my slides, the equipment that any professional photographer would have”, but sometimes large telescopes are needed, “if a professional camera is no less than two thousand or three thousand euros, the price of a telescope is incalculable ”, in those cases it is the company that hires it that has the instruments. Other times it is he himself who devises the tools with his engineering knowledge. In the Teide Laboratorio de Nubes project, carried out in collaboration with AEMET Izaña and Teleférico Pico del Teide, they have developed housings resistant to the extreme temperatures of the heights, to be able to install cameras on the Teide, which can be controlled remotely from home, to capture the atmospheric phenomena that develop in the National Park.

Obtaining the perfect image is not easy or casual, in this specialty it is a long process, in which the image is “sought”. “It requires a previous documentation work, to know when the phenomena will occur, in what place and with what angle I have to take the photo. Before shooting I can spend months in front of the computer ”, explains the photographer. The percentage of astronomical photographs that go well is one in four, but there are phenomena with such wide periodicity that, sometimes, it is impossible to reach the fourth attempt. The trick is "to be patient and know how to be at the right time in the right place", with that and some basic notions of photography on how to focus on the stars, the maximum exposure time, the aperture and the maximum sensitivity, you can get Photographs of the night sky "quite decent" with any digital camera or even with high-tech mobiles, according to López.

The sky of the Canary Islands is among the best on the planet along with that of Chile and Hawaii. The altitude of the Teide and Roque de los Muchachos observatories allows the sky to be much cleaner, "because you have removed two and a half kilometers of atmosphere" and there is very little light pollution, "whatever can reach it blocks it. the sea of ​​clouds that is below ”. Furthermore, "on La Palma there is something unique in the world, an anti-light pollution law". The trade winds also play their part because "being so soft and laminated they make the atmosphere much more stable." All these conditions allow the Canary Islands to boast of having a "so special" sky.

The beauty of the Canarian sky has been captured in the Cosmoislas exhibition, a set of 31 astronomical images fused with the most characteristic landscapes of the Islands. “We can see incredible places, such as Mount Teide or the centennial Sabina, which we usually appreciate during the day. If we combine it with the night, with the sky that we have, the result is wonderful ”, he clarifies. In addition, the exhibition has a didactic component in which astronomy concepts are explained.

The astrophotographer's images try to get the person to be in the place, so that they can enjoy the scenery of the Archipelago. At times, López appears in his own photographs so that people who see him can move to the place where he was. "I do it so that the person can appreciate the incredible and diverse landscapes of the Islands and their unique sky, the people who live here see it as something normal."

In addition to the Canary Islands, López has photographed China, its skies and eclipses, Russia and the northern lights in Iceland. Although his "pending subject" is still Chile, where he wants to travel to be able to photograph the southern hemisphere. Currently, López works on the Teide Laboratorio de Nubes project, together with AEMET Izaña and Teleférico Pico del Teide and captures informative images for the IAC. After NASA has published more than thirty of its images. The objective of the photographer is to maintain the level that he has achieved. "When NASA publishes a photo of you there is nothing higher, there is nothing above NASA, the impact of publishing you is incredible", but the sky is so immense that there will always be new things to discover and photograph.