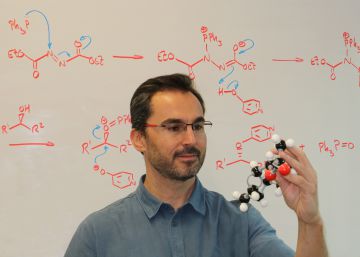 Teaching to think, to relate things and to search on their own, are the three essential tools that every teacher should transmit to students. They are also the three knowledge that support the teaching commitment of Daniel Blanco (Madrid, 1973), professor and researcher of Organic Chemistry of the Dutch university of Radboud, in Nijmegen (to the east of the country) and brand new national award for the best of his profession in Holland, granted this November by the Royal Chemical Society (KNCV, in its Dutch acronym). In exchange for his passion for a subject that, according to him, "is alive and everywhere", the student has the right to receive excellent teaching. “And excellence is paid, but industrialized countries tend to cut budgets in education, and it shows, as we have seen in the results of latest PISA report" Blanco studied at the Autonomous University of Madrid, but since 2012 he teaches classes in English that snatch his audience.

Audience is not a randomly chosen term, because the style of the Spanish teacher combines deep knowledge of his subject with a certain sense of spectacle. His students are between 20 and 24 years old, and are studying the last years of the Bachelor (Degree title) and the Master, and Blanco minimizes memorization. “In all races you have to use memory, but many colleagues prefer to explain their subject and then indicate a bibliography. This prevents, among other things, that someone raises unexpected questions, or even demonstrates that they can know more than you. ”, he says, and then describe one of his classes. "I start playing music to create the right environment for what I'm going to expose." Then add real models, for example, "about the composition of the dye used for jeans." It also includes videos and movie scenes, "because cinema is full of references to organic chemistry," he says enthusiastically. And so, among the formulas, appears the American actress Julia Roberts talking about the harmful effects of chromium for health, in the film Erin Brockovich. Or Sean Connery, like a mature James Bond, on tape Never say never"When your boss mentions free radicals, those molecules that appear when talking about cosmetics or diets." All this costs a lot of preparation time for a teaching schedule “of four or five hours a week, throughout the year”.

The current prize is the third one he receives. In 2018, they gave the one from their Dutch university to the best junior professor in the entire Faculty of Science. And in 2014 he took the trophy for chemistry teachers. “I love teaching, and while studying for the race in Madrid, I founded the White Academy. It worked between 1994 and 2002, and taught chemistry to other students. I started with 21 years and made many friends, and they are things that are remembered. In the same way that I have not forgotten Aurora Núñez, my Second Chemistry professor at BUP and COU, and here we return to the PISA report. Society does not see us as heroes, although the students, who are the future, depend on us. And another thing: teachers are poorly chosen. Knowledge is essential, but there is more, call it a people's gift, motivation and make each class the best. But all that must be paid properly, and that is not the case. ”

Blanco finished his degree in Madrid, and when he was in his second year of his PhD in the Department of Organic Chemistry of the Autonomous University, he was told that there was a conflict of interest with his private Academy. He left the thesis halfway and chose to continue teaching for several years, until in 2002, visiting a friend enrolled at Radboud University, he resolved some weekly exercises put by the professors. “When my friend revealed that I had done it, I interested them, and I ended up doing the thesis here. When I finished, and after a postdoctoral stay, I returned to Spain in 2009 and had a contract with the CSIC (Higher Council for Scientific Research) but financial aid for other projects never came, ”he explains. Then, the same friend met by chance with the former boss of Blanco, "and when he said that I was unemployed, they called me." It was 2012, and now his photo dominates the university honor roll, in Nijmegen.