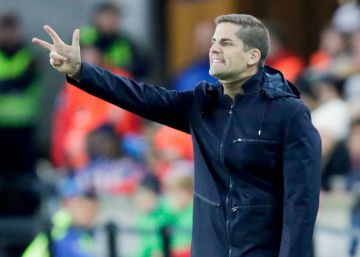 After Atlético de Madrid decided to take João Félix to the Prado Museum to record a video for his presentation, this Friday it has been the Royal Spanish Football Federation that has chosen the gallery for a presentation, the list of summoned for the next two matches of Spain. Apart from the scenario, Robert Moreno's list has left a major novelty, the call to Zagreb's Dinamo footballer Dani Olmo, which opens with the absolute.

In addition to Olmo's first call, Moreno recovers Álvaro Morata in the lead, on a scoring streak with Atlético de Madrid, and Paco Alcácer, from Borussia Dortmund. On the side of the absences, the one by Dani Ceballos, from Arsenal, which does not appear on this occasion among those called.

Achieves the qualification for the Eurocopa 2020 thanks to a goal in Rodrigo's last breath In Sweden, the national team is now looking for the top spot in their group to be seeded in the draw. He will get it if he wins one of his next matches, against Malta in Cádiz next Friday 15 and against Romania in the Wanda Metropolitano, in Madrid, on the 18th. This is Robert Moreno's list for both clashes:

Real Madrid: Zidane, fourth attempt at the Cup: his cursed tournament and the only title that resists him