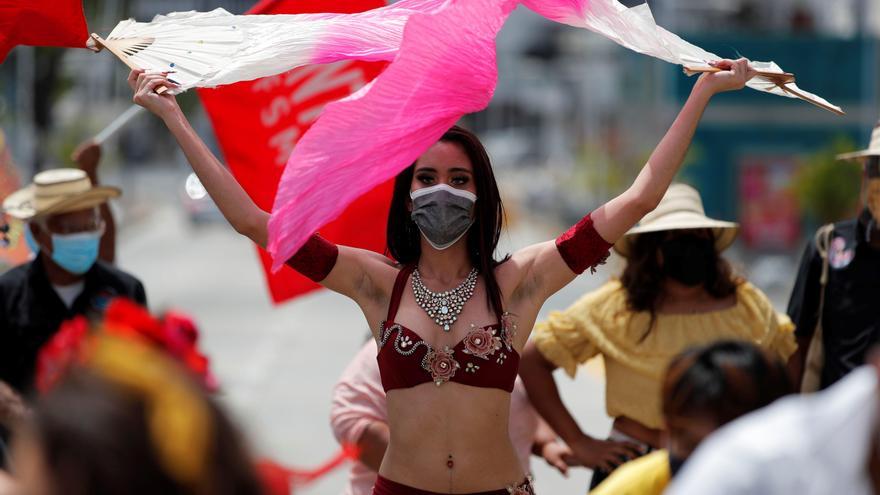 Panama, Feb 17 (EFE) .- Dancers and artists performed this Wednesday a colorful choreography in one of the main avenues of the capital of Panama to demand from the authorities the formal recognition of the work of dance, historically relegated and even more so in times pandemic, as reported.

The artists, men and women, wearing brightly colored clothes, performed the half-hour choreography on the well-known Via España avenue, near the headquarters of the Ministry of Culture (MiCultura), the center and objective of the peaceful protest that it was summoned by the Union of Dance Artists (Sadanpa).

The dancers claim that they are in a kind of “legal limbo”, without a legal basis for their work, which has also been hit hard by the covid-19 pandemic, making it difficult to generate income.

“We dancers are unable to generate income, that is why we are fighting for our rights (…) for the rights of culture,” Jorge Rivas, a Latin rhythm dancer who has worked in shows by artists like Gilberto Santa, told EFE. Rosa, Rey Ruiz and Víctor Manuelle, among others.

Rivas affirmed that he has had communication with some other artists who are experiencing the same: “This is quite difficult for people in the artistic world,” he said.

“We are trying to reinvent ourselves in the sense of making virtual songs, but it is not the same, it is the contact with people that we need,” added Rivas, certified as a judge in world competitions by the World Salsa Congress in Puerto Rico. and organizer of the Panama Salsa Congress, said the artist.

Felix Ruiz, communication secretary of Sadanpa, told Efe that they complied with doing 30 peaceful minutes of art and dance assault on the Via España “because we are disciplined, because that is part of our development as professionals.”

He stressed that they raise their voices and fight “not only so that we are seen as an addition to society, but as a fundamental part” of its development.

In a statement, Sadanpa indicated that the pandemic has been a difficult time for dance artists, who anticipated that they would be the last “to go back to work” amid the economic shutdowns, and denounced that “that laziness and the null recognition of their work are the true virus that has always persecuted the sector “.

“We have no guarantee from the government or any state entity to safeguard the artist’s position, we continue to graduate professionals from the University of Panama (state) who do not know if they are going to have a job, that is, we live in the shadow of the informality, “Ruiz remarked.

Ruiz attributes the situation to “legal loopholes that impede the proper development of artists in the country”, which, as in the case of dancers, contribute a lot of money to large companies, the media, large event producers, but remain “in Limbo always charging Pyrrhic salaries “, even below the minimum wage.

“We want that formality because people are studying in universities to be professionals of culture, art and they don’t have that, we want new ecosystems because we don’t want to depend solely and exclusively on the Ministry of Culture.”

Rey went further and released that the MiCultura has been in charge of “impoverishing art in our country (…) because we only depend on them, and many times the contributions of artists that are made to the ministry and their projects are remunerated with a plate of food, with ‘thank you very much and see you soon’, and that cannot happen “.

For its part, the Ministry of Culture reported that the head of the office, Carlos Aguilar, met today with representatives of about twenty artistic and cultural groups and guilds, to formalize the installation of work tables for the elaboration “in consensus “of a law that improves the conditions of artists of various disciplines throughout the country.