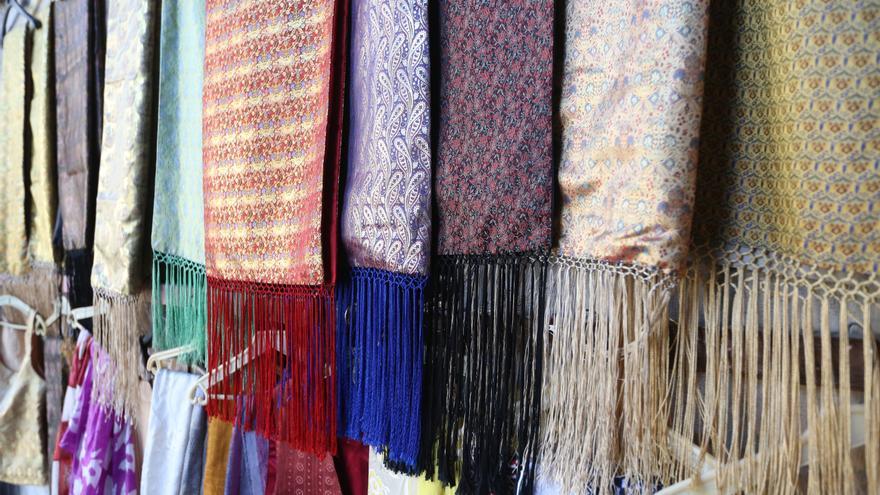 Damascus, Mar 3 (EFE) .- The millenary art of damask, the luxurious embroidery originating in the Syrian capital, is in danger due to the war that has corroded the Arab country for a decade and has forced many of its artisans to emigrate and makes it difficult to obtain its main raw material, silk.

"In Damascus there were 40 artisans doing it. Today, unfortunately, there are two of us left and we are asking for an effort to keep this trade alive and teach it to future generations," says Ahmed Shakaki from his shop-workshop, where, at sixty years old, he masterfully weaves threads of gold and silk on his old loom.

Shakaki, who has been practicing this profession that he inherited from his father for four decades, passes the threads to Mohamed Rankoussi, a thirty-year-old who assists him in this old business located in a handicraft market and where these fabrics are exhibited, considered the most expensive of the world.

The famous brocade technique dates back to 3,000 years ago, when it was born under the influence of silk fabrics from China on the Silk Road, where the now Syrian capital occupied a privileged place, explains the director of the company Artesanías Sirias , Ruba Salim.

Rankoussi, who learned the trade at lengthy studies in textile science in Damascus, notes that "what distinguishes this fabric from Chinese and Indian brocade is the importance of what it reflects in its engraving and drawing."

The damask contains geometric designs inspired by the decoration of the Umayyad Mosque of this city and characteristic motifs such as roses, hazelnuts and butterflies, or "the most famous, that of the loving birds", he relates while showing some of the rolls of cloth that are piled up in the ramshackle store.

These rich fabrics are used to make curtains, upholstery, wedding or evening dresses and the most common colors are blue, white and red.

Today, the young craftsman explains, damask is woven on Jacquard looms, a machine invented two centuries ago in Lyon by the Frenchman Josepgh Marie Jacquard, like the one in Shakaki's workshop.

Salim assures that during the last century there were a thousand looms in Damascus dedicated to this type of weaving that bears the name of the city, but currently only that of Shakaki remains and there are only three brocade masters and a dozen young artisans .

The director of Artesanías Sirias attributes this decline to the laboriousness of the technique that requires a whole day's work to produce a meter of fabric, which raises the price of the product.

This industry had already suffered other crises in the past due to the lack of skilled labor or the shortage of raw materials at specific times.

LACK OF SILK AND EXPERT HANDS

At present, both factors add up: the artisans who remain in Damascus attribute the current crisis to the migration of colleagues due to the conflict since 2011 and the low production of their main raw material, silk.

The material came mainly from Draykish, a city in western Syria where the worms that produce it were raised and, from there, it was taken to the once buoyant commercial hub of Aleppo (north), where it was bleached or dyed and packaged for shipment to the capital.

Now, says Shakaki, "there is no silk thread except imported and its cost is very high, which is reflected in the final price of the product," in a country where inflation is also skyrocketing due to the collapse of the currency. local in the war years.

To increase production, the State has opened some training centers, but - Shakaki laments - those who leave them are beginners and cannot be described as true artisans of the millenary Damascene art.