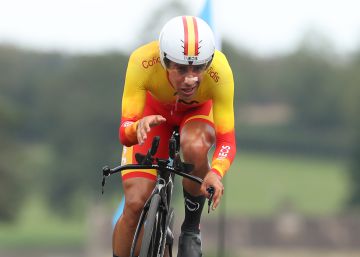 One day before the Tour ended, in which Egan Bernal dressed in yellow on the Champs Elysees, and amid the smiles and congratulations, the patron of the Ineos, Dave Brailsford, the Briton who set up the winning structure, almost invincible that until a few months ago was called Team Sky, gathered all the runners in the immense caravan of the team . With solemn words he thanked them for the work they had done for the victory of the Colombian cyclist, and when he was finishing, he pointed his finger at Jonathan Castroviejo and, out loud, he said: "The only thing I regret now is not having signed this cyclist five seasons before."

Castroviejo is from Getxo and Gazteluzarra is a neighborhood on the cliffs to the west of Arrigunaga beach, the center of the universe of the writer Ramiro Pinilla, winner of the Nadal Prize with The Blind Ants, the story of a coal ship that embarks on its sandy beaches. The oldest of the place, still called Castroviejo - its Castilian version -, to the neighborhood where an old fortress guarded the ships that entered through Punta Galea. The cyclist Brailsford extolled in his speech, dressed in the colors of the Punta Galea Cycling Society as a child, such as Mikel Zarrabeitia, Roberto Laiseka, Iñigo Landaluze or the ill-fated Otxoa brothers. It is a good quarry of cyclists, proud of Jonathan's work, which in the road test on Sunday Yorkshire World Cup (9.30 to 16.50 hours. Teledeporte and Eurosport 1), will have to carry the coal, pull Alejandro Valverde's car, as the protagonists of Pinilla's novel; He will do the dirty work, which the leaders of a team thank; the one that directors appreciate.

Castroviejo has changed. In 2016 he took the podium in the World Cup time trial. His benefits allowed him to be one of the fastest in the tests against the clock, but under the baton of Brailsford has been transformed. He is now a more compact runner, capable of dragging his team into the mountain passes of the Tour, or bringing Alejandro Valverde as comfortable as possible in his attempt to revalidate the world title. The Basque rider is no longer as effective in the chronos - he finished 24th at Harrogate - but he is the reliable squire for any team. On Thursday, while his companions were traveling from Alicante, he left early in the morning, from the Cedar Court hotel in Harrogate, headquarters where the Spanish and Italian teams live together, to recognize the circuit that will guide the Spanish team: “He I saw the first 200 kilometers and they surprised me. The weather is going to be bad, it seems that it will rain at times. It will be very hard, of many discards, ”he says. “We are going to get to the circuit and people will already be thinking about getting off the bike. It will be very hard. At the beginning there are 200 kilometers through a natural park where the wind hits a lot, with a very rough road, and you can stay on the slopes. It will be all by elimination. ”

For Castroviejo, Alejandro Valverde He is still a favorite, at 39, for Sunday's race: “It never fails, it is always there. He is a fondista and I think he is doing this kind of career well. Before seeing it, I thought the circuit was going to be more technical, but it's very physical. ” The Basque assures that “the entire first round of the race is of strength and in the end, already in the circuit, I do not think that the position has to be fought much. It has possibilities because the circuit is not too demanding but with the hardness that will bring the race with a kilometer to five or six percent of unevenness it can already break ”.

The UCI announced on Friday the bibs that the cyclists will wear. Valverde, as world champion, will wear number 1; Castroviejo will be the 2, and the 3 will be carried by Imanol Erviti, the man Valverde trusts most, the perfect gregarious. When the teams did not carry a bus with a washer and dryer, the assistant of the head of rows washed and drained the clothes by hand in the room, so that the leader did not suffer tendonitis in the arms. It doesn't happen anymore. The domestic is dedicated to other things, but the main one is still making life easy for his partner. Navarrese and Murcia share equipment and room. It will be, as in Movistar, the route captain of the Spanish team; the man who will attend Valverde's wishes and lead the Spanish group on the asphalt, along the narrow Yorkshire routes. The two understand each other on the road and out of it with a look. They even share tastes. In the concentration of Alicante they were hooked to The paper house, through Netflix. Sometimes they argue, "but with Alejandro you can, accept criticism normally," says Erviti, the Navarrese who meets his seventh World Cup, always with the same role, "although I do not like that denomination of captain of the road. It has become fashionable, but I am here to help in all that I can. It is a compendium of everything, in short, to help things go well in the team. A few days it's time to raise water, others pull the squad or close a hole. You have to improvise according to the circumstances. It's about having experience, but in the selection there are very expert people like Luisle Sánchez, Izagirre or Rojas, who also know what needs to be done. ”

Erviti trusts Valverde, because, “although here the range of favorites will be more open than last year, he is at the level to dispute it and also with the peace of mind that he has already won it and when you have not done it, the same the precipitation leads you to make a mistake ”. The Navarrese has faith: "Working for Alejandro is easy and wonderful, because he always responds and gives meaning to your work."