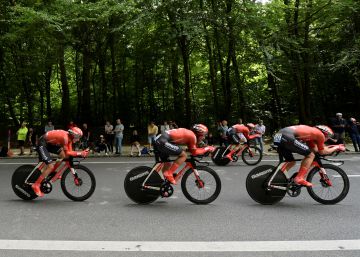 "The UCI is spinning ever thinner", says the biomechanical Xavier Aguado, and although he says it without pretending to make a joke, there is no other choice than to laugh because Aguado, a specialist from the University of Toledo, refers to the fussy eater has put the International Cycling Union (UCI), the body that regulates cycling with the issue of the length of the socks of cyclists, fine thread, which does not want to be too high.

The reasons? It is not known, but the cut applied by the UCI coincides just with the height of the fashion of high socks and multiple colors in the squad that for aesthetic reasons, and following the path opened by Lance Armstrong and Bradley Wiggins in the first decade century, has taken over the youngest cyclists.

Before, since the 60s of the last century, the official aesthetic was of socks only white with black only shoes (and culotte always black rigorous), and the champions of the time, from Fausto Coppi to Bernard Hinault through Eddy Merckx, Jacques Anquetil and Luis Ocaña, as they considered it, as sacred as the habit of a priest. The height of the socks was also untouchable: 6.5 centimeters of cane so that the hem would only cover the ankles. The boldest runners, true iconoclasts, ripped the hem and lengthened them. And they marked a trend. Others, more radicals, acted the other way around: they cut them, like Miguel Ángel Perdiguero, who did not allow any thread to appear above his shoes.

Now they are made of up to 15 centimeters of cane, like those who, proud in their defeat, wore them beyond the calf, burning yellow, the overthrown leader Mike Teunissen.

On Sunday none could risk a penalty. Minutes before the team time trial, the UCI mounted a triple control stall at the start. In a cabin the measure was taken to the bikes and to the couplings of the handlebar, regulated to the millimeter to avoid aerodynamic advantages; in another, everything was weighed, as if that were a racecourse; in the third, one of the commissaires of the UCI, with a kind of sextant in his hand, a complicated compass, measured that the rim of the sock of the cyclists did not exceed 50% of the distance between the head of the fibula and the malleolus , the spherical bone of the ankle. It is what marks a rule so succinct that neither explains the reasons for its existence.
"As if they did not have more important things to measure," says Carlos Verona, Movistar's Madrid native, lover of long rods, long as his long legs, who does not agree with the UCI. "They are only going to be measured in the counter-locks," says Vicente Tortajada, a Spaniard who is part of the school of commissioners. "It's Jean François Peraud, the one in charge of the fight against technological fraud who has organized everything."

A peraud was hired to detect possible engines hidden in the bikes, but, after not finding any engine, has expanded its range.
A few years ago, the UCI tried a first regulation of socks. He did it in order to avoid the proliferation of compression stockings up to the knee used by runners at rest. Some scholars claim that it is now a matter of fighting against the aerodynamic advantages of long socks, which, combined with closed booties, could save, say, up to 0.5 seconds per kilometer.

"It may be a norm to avoid having a regulating bag through which clothes are fitted that can suppose real aerodynamic advantages, such as some couplings that speed skiers wear under their clothes and that allow a good suction effect. measured, "says Aguado. "Because, of socks, there is nothing published, that I know".