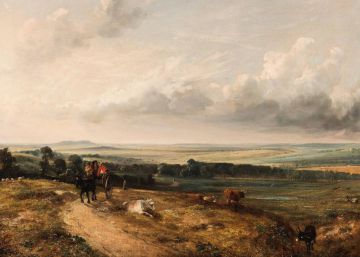 The National Twenthe Museum, to the east of the Netherlands, has been deceived by cybercriminals, who paid between 2.5 and 2.9 million euros, the figure is not clear, for a work, whose authorship and title does not reveal and that various media Dutch point out that it is a landscape of the English painter John Constable (1776-1837). The museum, which did not want to give details about the picture to this newspaper, made this transaction believing that it was done with the London dealer Simon C. Dickinson. Negotiations between the museum and the British art merchant occurred throughout 2018, and the thieves managed to hack their email exchange. When they saw that the payment was about to be made, they impersonated Dickinson's intermediaries and convinced the Dutch art room to remit the money to an account in Hong Kong. The case is being analyzed in the first instance by the High Court in London, but the web is in Twenthe. It was sent to verify authorship and conservation status, and the museum considers it purchased.

The picture is titled View of Hampstead Heath: Child's Hill, Harrow in the distance, and was painted by Constable, a specialist in outdoor landscapes, in 1824. Arnoud Odding, director of the Twenthe National Museum, saw it exhibited in 2018 at TEFAF, the Maastricht International Art and Antiquities Fair, in the space of Simon C Dickinson, and they began to negotiate. "We have verified that our email is secure, up-to-date and in order, and we have brought the dealer to justice to make it clear that the picture was acquired and paid," Odding told Dutch television. Dickinson argues the same, that the security of its computer systems is adequate and works, and the museum should have checked the accuracy of the bank details before proceeding to the payment. This Thursday, the British judges rejected the museum's claim, in which they accused the dealer of negligence for not monitoring the section of his cybersecurity. According to Twenthe's lawyers, at one point in the talks, the Dickinson negotiators saw that some of the electronic messages crossed between the two parties were signed, but they were not theirs, notes the Bloomberg agency. Despite this, they did not stop the transaction in time. Both affected blame themselves for not monitoring their networks on the Internet, and the judges themselves have indicated to the museum that they can litigate again, if they find alternative arguments to those now presented.

Dickinson's spokesmen have declined to make statements to this newspaper "until the managing director returns, Emma Ward, next week." Ward has described what happened as "unfortunate, since we are both victims", in a note published by the digital magazine Artnet For its part, the Twenthe Museum has posted a statement on its website, which reads: “Constable's picture fits into our collection, and we gather the necessary capital with the help of the Rembrandt Association, the Mondriaan Fund and the Fund of the Ministry of Education, Culture and Science [que colaboran en la compra de obras importantes para el patrimonio nacional]. We have satisfied the payment, made disputed by the seller, and there are indications that well-organized international criminals have managed to infiltrate communications using adulterated electronic traffic. It seems that it is the so-called 'intermediary attack' [donde el atacante observa e intercepta mensajes entre ambas víctimas sin que estas lo noten] and an international complaint has already been made about it. ” The note adds that "our information systems and technology have been reviewed and there has been no hacking."

The future of the web is not clear either. If he does not return to London, Dickinson cannot sell it in order to pay the owner, who remains anonymous. It is not ruled out that the judges themselves must decide in the end who they belong to. Simon C. Dickinson, is the firm founded in 1992 by the London dealer of the same name. Before, he was in charge of the Old Masters and British Painting in the Christie's auction house, and in his firm he has specialized “in managing discreetly and privately the sale of works from the Old Masters to Impressionism, modern and contemporary art”, as indicated in its documentation on the Internet.