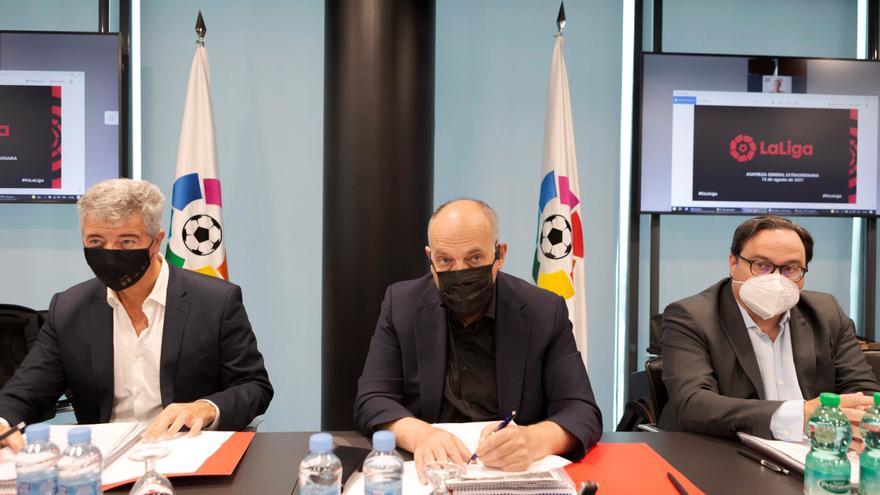 The investment fund ‘CVC Capital Partners’ will disengage from the agreement with LaLiga -signed for 50 years, until 2071- and will make way for another investor within eight to ten years (around 2030), assured Juan Arbide, managing director of the CVC fund in a meeting with the media in which he explained the agreement together with Óscar Mayo, executive general director of LaLiga. “We will abandon The league after a little more than five years, there is no exact date, but in these operations the normal thing is to leave in 8-10 years, “said Arbide.

According to both organizations, there is a CVC exit protocol so that the next collaborator “has similar ideas” to the investment fund itself and remains in “harmony with the LaLiga board of directors.” “Someone without experience in sports will not arrive, who does not value LaLiga the same as CVC or who does not have our same ideals,” Mayo explained.

The agreement between LaLiga and CVC was presented to the clubs last August and of the 42 attendees, three did not accept (Oviedo finally agreed), so they will be on the sidelines. Real Madrid, Barcelona and Athletic Club will not have access to the 2,100 million euros that the CVC Fund will inject into LaLiga through the creation of a new company called ‘LaLiga Impulse’. In exchange for this injection, CVC will keep a figure close to 9% of the audiovisual rights. The operation will be carried out through the creation of a new company (‘LaLiga Impulse’) to which LaLiga will contribute all its businesses, subsidiaries and joint ventures and in which CVC will have a minority stake of approximately 9% of the capital. Additionally, CVC contributes funds to LaLiga through a participating account.

At first, both the transfer of audiovisual rights to CVC and the injection of capital to LaLiga were going to be higher, with almost 11% in audiovisual rights and 2,700 million euros for the clubs, but the departure of Real Madrid, Barcelona and Athletic Club caused a drop in both figures.

Both speakers, Mayo and Arbide, confirmed to the media present that the situation caused by the covid-19 pandemic “accelerated the agreement process” between both organizations. Likewise, Arbide highlighted the value of the competition and assured that “CVC is fixed in LaLiga for being a global asset with the two best clubs in the world.”

At the meeting, Óscar Mayo presented the deadlines in which the money will reach the clubs: “This October 40% will arrive. From here, 20% will be distributed in each June of the next three years, thus reaching the about 2,100 million euros “. The objective of this investment, according to Arbide, is “to grow the competition through the growth of the teams’ own brand”. It is for this reason, according to both entities, that 70% of the injection of money to each club will go to encourage club growth through new facilities, sports cities, acquisition of other clubs and related matters. 15% will go to debt reduction and the remaining 15% will go to transfers over three years, on the condition that the money invested is recovered in this section in the next four.

LaLiga, together with CVC, has drawn up a Club Development Plan that the teams will have to carry out and present to the employers. This plan will be supervised by the entity that presides Javier Tebas and advised, in turn, by external companies to help clubs get started. Each club has to develop a strategic plan on various areas, such as international development, branding, communication, sports strategy and digital, business, financial and legal development.

Rreal Madrid and Barcelona are not part of the agreement

Real Madrid and Barcelona are the two most important assets that LaLiga has at the moment. Juan Arbide, from CVC, praised the work carried out so far by both in terms of personal brand and product development (LaLiga), and stressed that although “we would have loved to” have them “we trust that keep doing it so well “, in this sense. “The use of funds makes more sense for the rest of the teams. We must recognize Madrid and Barcelona for their work these years at the helm of LaLiga, but we would have loved to have them,” he said. “We get a percentage of rights from LaLiga, not from Madrid and Barcelona. If it goes well, we all win. They are the two clubs that have done the best so far in this regard and the agreement makes more sense for the other clubs.”

The CVC managing director acknowledged that in the event of an alleged flight of both teams there would be “a problem”: “We have less influence on what they do, but we trust that they will continue to do so well. Hopefully they will not leave, that would be a trouble”. In addition, Arbide clarified that CVC “invests in LaLiga, not in the 39 clubs that accepted the agreement.”

The rejection of Serie A, key to the completion of the agreement

The investment fund CVC was very close to closing a similar agreement with the Italian league, but a clause from Juventus of Turin related to the Super League caused ‘Juve’ to vote against the agreement and caused the domino effect in the rest of teams, which ultimately caused the agreement to fail. In relation to this, Arbide believes that, if the deal with Serie A had gone ahead, “it would be difficult for us to be here.” “If we had done the Serie A thing, it is difficult that we would have been here. It is difficult to answer,” he said.

In addition, according to Óscar Mayo, from LaLiga, Serie A is once again interested in the agreement with CVC. On whether the investment fund now values ​​signing with the Italian league, Arbide was blunt: “We are not going to do now an operation that compromises LaLiga. CVC continues to look at projects and, as long as they are not an obstacle for LaLiga, it will do them” .