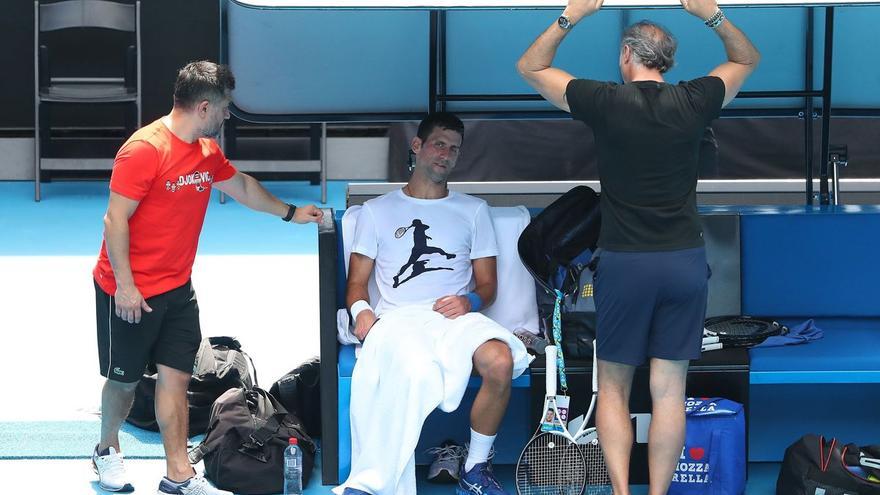 Novak Djokovic, as a person not vaccinated against coronavirus, It is very difficult to play the American season of tennis, due to the immigration measures imposed U.S and that will hardly soften while the pandemic don't give a world break. If the rules that apply to all foreign travelers who want to enter the country are applied to the number one in world tennis, at this time it could not play the 1,000 Masters of Indian wells, Miami, Cincinnati and, above all, the US Open, the only Grand Slam he missed last season.

As the 'New York Times' has advanced to Djokovic It would be difficult for them to be granted an exemption, as they do not meet the demanding North American measures that require unvaccinated foreigners to enter the country: that they are under 18 years of age, that they present a medical certificate stating that they cannot be immunized or that they have not been able to have access to inoculation, three conditions that the Serbian tennis player does not meet.

The threatened tournaments are those that are disputed this spring, the Masters 1000 of Indian wells, in California, who has won five times, and that of Miami, in Florida, which has six victories for 'Nole'. Interestingly, in 2020 he did not participate in either of the two. He was absent from Miami for "family reasons" and from Indian Wells due to fatigue, as the tournament was played in the fall after the postponement of its usual March dates due to the pandemic.

Currently foreign travelers can only enter U.S if they have received the complete vaccination schedule 14 days before starting the trip. In addition, they must present a viral test against covid 19, an antigen or a PCR, with a negative result that has been carried out the day before the flight departure. All the commotion in Australia, apart from the final chapter not yet written, does not help Djokovic either. This is how the 'New York Times' understands it.

Apart from the Masters 1000 the main problem, as long as the pandemic situation does not change between now and summer, it will Djokovic to participate in the US Open, the last Grand Slam of the season and the only title he missed last year after winning in Australia, Paris and London. The Serbian tennis player fell into New York by a triple 6-4 against the Russian Daniil Medvedev, number two in the world. This year the final is played on a very important day for New Yorkers, September 11, commemorating the fall of the Twin Towers.

The outlook does not improve for Djokovic in Canada, the other North American country with 1,000 Masters in sight. The tournament he has won four times is sandwiched between Toronto and Montreal. This year it will be hosted by the French-speaking city. It will be in August. Canada currently only allows foreigners to enter fully vaccinated.

In the 1,000 Masters and the two European Grand Slams (Roland Garros Y Wimbledon) the condition for Djokovic it seems somewhat healthier. You should not have any problems in Madrid, due to the light restrictions of the Community and the fact that Feliciano lopez, tournament director, has been one of the tennis players who is supporting him the most. On the other hand the Rome Masters 1000 It has already announced that unvaccinated tennis players will be able to compete although they will do so without being able to leave the assigned hotel except to train and play.

The British Prime Minister, Boris johnson, did not want to comment on Monday when they asked him if Djokovic could go to Wimbledon 2022, the temple of grass. Currently, if the regulations are not changed and unless a special exemption is granted, Djokovic To play in England, he would have to travel from Paris to London, at the end of his participation in Roland Garros since he would have to be isolated for 10 days in the United Kingdom, with two PCR, one on the second day of stay and another on the eighth, before being able to have of the right to move freely through the country. With a pair of arm punctures he would fix his future as a tennis player.