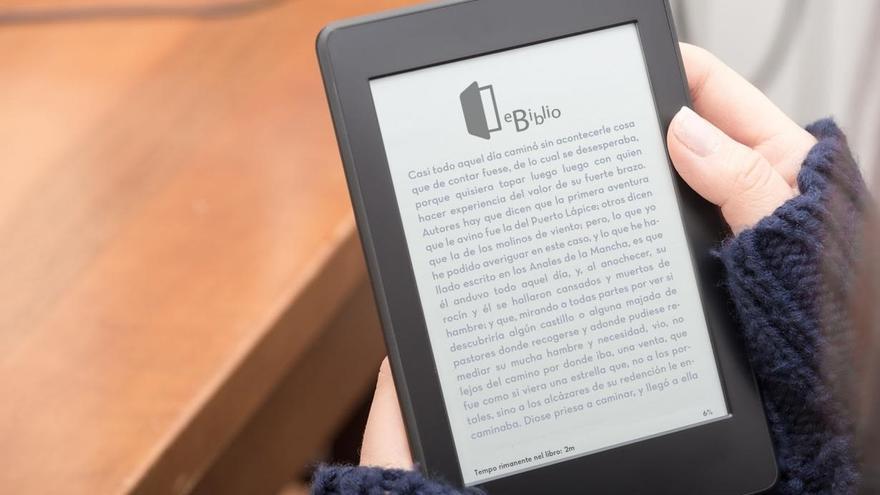 At the same time that the BOE announced that the Ministry of Culture will invest 2.9 million euros in 2022 and 2023 in the purchase of books for the digital library (multiplies the previous amount by three), the working group of the digital loan of the Cooperation Council Librarian sent to the General Directorate of the Book of the Ministry of Culture the conclusions of the Annus horribilis that have suffered in 2021. The group is made up of 17 librarians and they are in charge of dealing with the infinite complaints and reviewing the new platform, Libranda. This system, created by Planet along with six other publishing groups in 2010, it now belongs to the Canadian multinational De Marque. The eBiblio service tender, the public library on-line for streaming or download managed by the Ministry of Culture, has passed from Odilo to Libranda a little over a year ago. The report will be known in detail in a month, but one of the librarians summarizes the year that has ended as "a missed opportunity" to implement the digital loan.

Libraries Were There During The Crisis: Some Surprising Facts About An Invisible Social Network

"Lost" because in 2020 the digital reading was at full capacity during confinement. With bookstores and libraries closed, users skyrocketed and the online library, open 24 hours a day, seven days a week, grew 119% in loans and 120% in users, with daily requests that exceeded the 4,000 in communities like Madrid. The Ministry had to make an extraordinary investment of 368,154 euros to buy more loan licenses. In Catalonia, the loan multiplied by 336%, before it left the system, as did the Basque Country, with the change in tender. The machine continued to function even after the isolation in the houses ended. The year ended with a record figure: 3.7 million loans. Neither the Communities nor the Ministry had dedicated a euro to promoting the platform and the appalling health circumstances had launched eBiblio to stardom. In 2021 it was only necessary to finish off to retain the user and reading, especially on mobile phones.

And then the blackout came: eBiblio's migration from the platform managed by Odilo to Libranda caused a service interruption between November 27 and December 9, 2020. That was only the first of the problems that ended with all the projection plans of the public tool. The competition won to the downside by the company that owns Libranda left out Odilo and, as professionals tell this newspaper, "the libraries and users in the middle of a business war of which we have been the victims." To begin with, the titles acquired by Odilo (with public money) could not be transferred to the new Libranda platform. This newspaper has tried to contact Arantza Larrauri, general director of Libranda, but it has not been possible.

One year without fix

From that moment on, the librarians had to go to the publishers to ask them, please, the files of those titles and thus be able to recover them to make them available to the user again. If that had been the only drawback ... the new platform prevented returns, caused problems for the loan and download of some books and audiobooks, had errors in the app, loss of information related to content intended for adults that could be lent to the children, nor did it allow to send emails to readers ... One year after the award, the new eBiblio does not allow basic functionalities such as synchronization between devices to be able to read on the mobile or on the computer without losing the book or the point of reading.

"It has been a totally unexpected task, but we have been a very good work group. Basically, we have dedicated ourselves the whole year to correcting the incidents that arose and to contact the publishers to get the files of the titles that Odilo had," he says to elDiario.es Elena Sanz, senior technician of the Libraries Service of the Xunta de Galicia and coordinator of the aforementioned working group. He acknowledges that problems still continue, that the platform "needs notable improvements." "We have lost users who could have become loyal. There are users who have given up due to the change of platform. We have not made it easy for the readers," acknowledges Sanz.

Despite the experience of the librarians, the General Director of Books and Reading Promotion, María José Gálvez, assures this newspaper that the migration problems "barely lasted ten days." "Since January 1, 2021, new utilities have been added to the platform," says Gálvez. In addition, it summarizes the problems that may have occurred, despite the reports from the librarians on the table, to a "change of colors" in the buttons of the functionalities. However, it does acknowledge that "there is room for improvement in the platform's profits."

The accounts do not come out

The numbers sing of the lost opportunity: from 3.7 million digital loans in the autonomous communities it has gone to two million, according to data from the Ministry of Culture. In this decrease in use, the departure of Catalonia from the agreement between Culture and Libranda for 2021 must be taken into account. As the librarians consulted say, Odilo campaigned strongly among the autonomous communities and warned of what was going to happen. To stop the march of other communities, the Ministry put European aid on the table. A condition that stopped a total spin-off of the model. If we make a comparison of figures without Catalonia (or the Basque Country), the disaster between years is less: 2.8 million loans in total in 2020 and two million in 2021. A loss of 28.5%. Catalonia has maintained the level of loans it had in 2020. In communities such as Madrid and Andalusia, the eBiblio phenomenon has hit scandalously and has lost half of the loans they made in 2020, remaining in figures similar to those of 2019. Only in Cantabria and Castilla y León digital loans grew.

Despite the fact that librarians point to Libranda's battered and cheap platform as the main cause of reader flight, the General Director of the Book explains that the data for 2020 should not be taken into account, but rather those of 2019. That year the platform added 1.3 million loans. Nor does he believe that the lack of investment in promoting the platform has been a problem because "2020 users already knew eBiblio." The problem is that most of them fled. "I had never used eBiblio before arriving at the Ministry," acknowledges Gálvez about the platform created in 2014. She took office as head of the book in January 2020.

This newspaper has been able to speak with all of the 17 members of the working group except with the person in charge of the Community of Madrid. All confirm that they continue to solve incidents and that at the end of 2022 the Ministry will reconvene the award of the platform for the next two years. It seems like a never-ending nightmare - repairing a winning app that's uncooked and changing it back when it's done. The perfect storm that catapulted digital lending in 2020 came the perfect storm that stopped digital lending in 2021.

Alicia Sellés, president of the Spanish Federation of Archival, Library, Documentation and Museum Societies (FESABID), believes that in addition to the fact that the change in technology has harmed, she has not gone out to look for young people either. "They are the perfect audience and no work has been done on attracting them. There is no public policy to promote the digital space that is the library and this is a key issue. Having a loan platform is not enough for young people to arrive. The positioning has to be worked on. Right now people have to guess that eBiblio exists and so on ... ", says Sellés.

In La Rioja they have the most outstanding rates of use of eBiblio thanks to the campaign carried out by the Community Government, indicates Jesús Ángel Rodríguez, director of the State Library located in Logroño. It indicates that 10% of its 19,000 users have faithfully switched to digital loan. It clearly summarizes what happened in 2021. "A product was bought that we had to develop. The 2020 promotion was free and we have not taken advantage of it," he says. He explains that eBiblio provides service, but it is at 60% and that if this had happened in the health sector, "Troy burns."

Thus it happened of the praise to the tension. From the applause of the users to the daily complaints. And when it seemed that nothing else could happen, Distribuidora Digital de Libros (the company behind Libranda) left the agreement and changed the conditions for acquiring licenses. Given the increase in digital loans, it decided to introduce expiration in licenses: the use of electronic books began to expire five years. The rest of the publishers do not impose the expiration of the licenses (copies of each title).

Each license has 25 uses and cannot be borrowed simultaneously, but four at a time. The librarians indicate that "the demand is being contained". "Our interest is to defend the most universal loan. Libranda in this way forces us to buy more licenses and budgets are very limited. In addition, when the book goes out of style it remains forgotten despite the enormous expense. We need more flexible models to buy licenses with concurrent uses, "says Elena Sanz.

And the rights of the authors rendered in digital? "We do not know if there is a fee like the one paid by the libraries to Cedro for the physical loan. This is not at all clear. We have no news that they have claimed it from us," says Elena Sanz. He says that there are publishers that ask libraries for loan data to agree with their authors what corresponds to them for their rights ... "Some. But they are the least," he says.