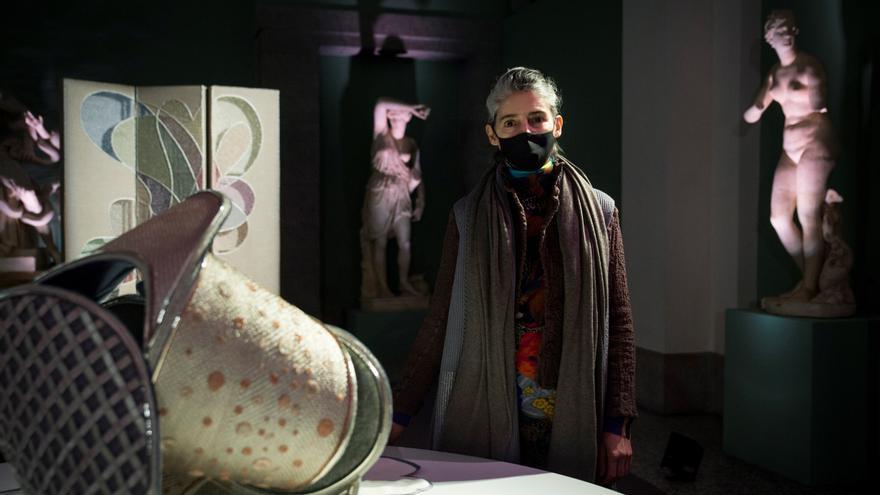 Madrid 23 Apr (EFE) .- Blanca Muñoz, one of the most recognized sculptors in Spain, defends culture as something “fundamental” for society, in the case of the Spanish, she believes that it is not valued as it should, therefore, advocates art at street level, but “really”, that people are “something more than Meninas on the sidewalks.”

Muñoz will enter the San Fernando Royal Academy of Fine Arts (RABASF) tomorrow. She will be the sixth woman who manages to enter the century-old institution, although she assures that it was never among her plans.

The effort was always the critic Antonio Bonet, former president of the academy, who recently passed away. “I listened to him, but like a mother who tells you that you are the best in ARCO,” says the artist with humor in an interview with Efe.

Muñoz (Madrid, 1963) builds beautiful sculptures in his Vallecas studio, with sinuous shapes, in which he bends and cuts steel plates and tubes. The work of the Madrilenian has been gradually settling, and now, her sculptures are scattered throughout the streets of all Spain, from Malaga to Bilbao, passing through Madrid.

How do you rate your membership in RABASF, an entity with a majority of men? “Women are more present in all fields and naturally their power will continue to spread,” he says.

Although she does not shy away from the question of gender, she values ​​her income more because of the support it represents for contemporary art from a younger generation than most academics: “It is a sign that the academy wants to continue opening up (…) it is necessary to give value to the traditional but updating it ”.

Since she studied Fine Arts, it was clear to her that she wanted to be an artist and not a teacher like many of her classmates. The Royal Academy of Fine Arts is linked to its beginnings, first with a scholarship to study at the Spanish Academy in Rome, and later with the National Prize for Engraving (1999).

Of humble origin, he recognizes that at first he could only link scholarships with prizes to be able to stay afloat. “He didn’t have a mattress,” he says, but he did have a lot of vocation and the support of his parents, something that “was key” in his adventure.

Now he is in a very active moment. Not stop. He has his sights set on his next exhibition at the Malborough Gallery (2022) and recently presented a collaboration with Iloema, sculptures made with Andalusian textile artisans, and also designs jewelery.

The pandemic has served him well. Once the anguish of confinement was over, he accepted reality and now that he has almost no social commitments, he works “with more depth.” The confinement happened in his workshop, in Vallecas, he took a mattress and there, without a shower or anything, he spent his days.

She is convinced that the pandemic has changed things in many ways, especially in the importance that people give to culture; Little by little myths are falling, such as that art is an elitist thing: “We are not bohemians, we are important to society. Culture helps to have a fuller life ”, he defends.

Since he made the leap from engraving to sculpture, he has not abandoned steel, his fetish material. “Maybe I seem recalcitrant, worse I still play,” he says with humor.

Sometimes he gets into “some aubergine” with other materials, such as marble, but his most recognizable work is made with polished steel, sometimes bent, sometimes perforated and always playing with light and colors.

She is disciplined and likes to work alone in her studio. “The day is too short for me,” he says. He does so without assistants and with ease with welding equipment and other tools. “It is difficult for me to create as a team, because I do not decide mentally. The process is very demanding on a physical level, especially handling tools. Let’s see over the years how I manage ”, he says with humor.