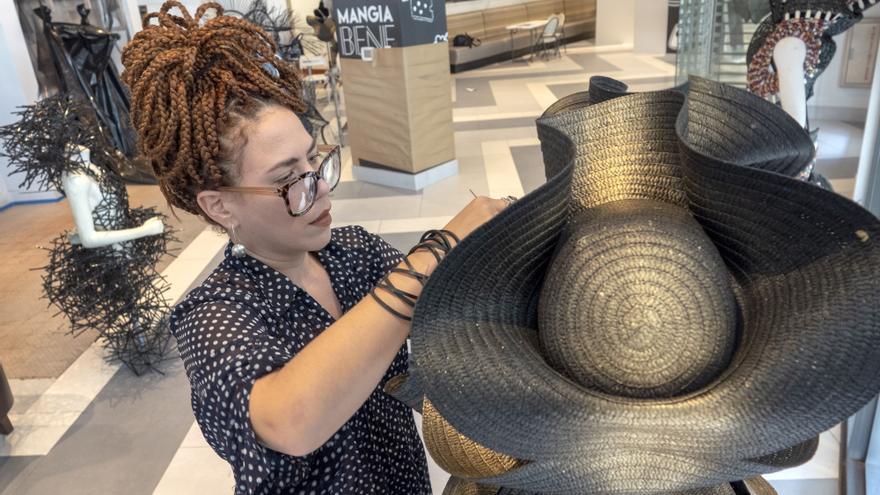 Miami, May 11 (EFE) .- Hats, straws to sip soda, can washers, waste tarps or fabrics made with cassette tape. Any material can be used by the Cuban visual artist Celia Ledón to create pieces halfway between fashion and sculpture that have reached the Kennedy Center in New York.

“There are people who would wear anything!”, He jokingly says when speaking during an interview with Efe about his works, the relationship between fashion and art and the dichotomy “belonging to a group and being unique” that he raises the act of dressing.

Ledón is in the process of creating a series of “Wearable Installations” or “wearable installations” that will be part of a tribute to the Spanish painter and sculptor Manolo Valdés in Doral, a city near Miami.

For one of her installations, the artist is making a “shopping bag” with a metal border, the structure that wealthy women of the 17th century used under their skirts, such as those portrayed in Velázquez’s famous painting “Las meninas”.

“It is not the same as a crinoline, which is the one that gives a rounded shape,” says this artist, fashion designer and art and film costume director, who has 13 films to her credit, including “Yuli”, from the Spanish Iciar Bollaín and with the dancer Carlos Acosta as the protagonist.

Ledón, who lives in Cuba and graduated in industrial design in Havana, says that behind his works are present the idea of ​​recycling, reuse and “decontextualization” of objects and elements of everyday life, such as dozens of straw hats to protect from the sun that has transformed into a dress full of movement like the ruffles of a flamenco dress.

Ledón’s interest in the meninas is one of the points of connection between this artist and Manolo Valdés, in whose works she is drawing inspiration for her current project, a commission from the Doral Museum of Contemporary Art (DORCAM).

The Cuban artist will put the final touch on the exhibition “The Legacy”, which has gathered in the parks of Doral a score of large-format sculptures by Manolo Valdés.

A parade of models wearing their “wearable installations” on a street catwalk through which dancers and musicians will also pass will dismiss the exhibition of Valdés, a resident of New York for decades, although he also has a home in Miami.

Of the twenty dresses and headdresses that she will show in the “360-degree show”, a dozen have already finished and the others she has “all in her head.”

She works alone and surrounded by materials from a Home Depot or an industrial waste container.

Two black dresses, one made of straws and the other of the plastic strips used to secure something or immobilize something or person, appear on both mannequins as samples of Ledón’s “Latin American baroque”, according to his own definition.

They worry a lot about their outward appearance, “sometimes excessively and in a bad way, because they go the wrong way,” says Ledon, who is very interested in the concept of the fashion victim, in unbridled consumption and in the “suffering” they imply, and he wants to dedicate his next presentation to the subject.

Ledón has produced two collections for the Cuban clothing brand Clandestina, “Country in construction” and “Sports Glories”, and has its own collection of streetwear ready to produce on which it has used as a base what is called in Cuba ” pullover “, in Spain” t-shirt “and in Argentina” t-shirt “.

When asked what she would never wear, she emphasizes that a T-shirt that reveals the torso, a garment with shoulder straps, the “animal print” pattern on pants or skirts.

She loves sleeves like the Venezuelan designer Carolina Herrera.

As a fashion designer, she flees from the “uniformed people” as she calls a way of dressing common in almost everyone and tries to disassemble garments and add scraps and elements from her varied collection of materials.