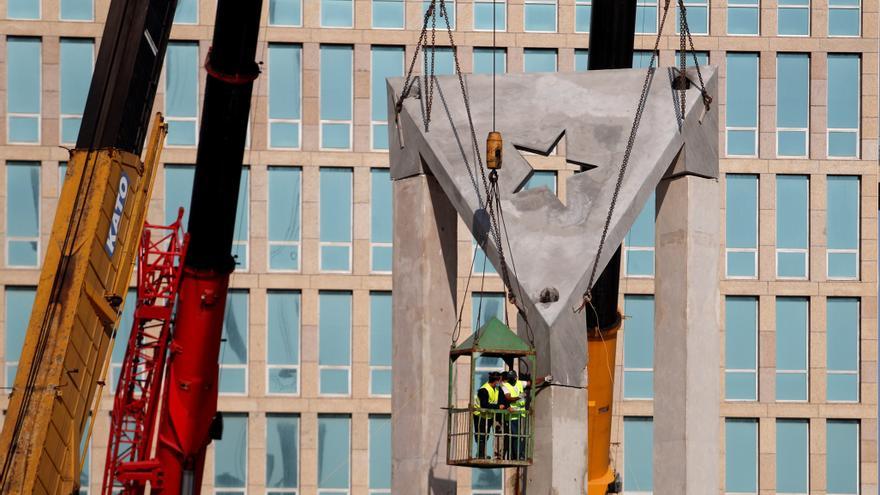 Havana, Apr 1 (EFE) .- A concrete monument several meters high in the shape of the Cuban flag has been erected since this week in front of the United States Embassy in Havana, which has generated criticism for its deficiencies structural and resource expenditure at a time of serious economic crisis.

The new construction, which has not been officially announced or inaugurated, is interpreted as an allegation of sovereignty against the United States, after the Donald Trump Administration tightened the embargo on Cuba and included this country in the list of countries that sponsor terrorism.

The structure, arranged in front of the facade of the American legation next to the Malecón in the central Havana neighborhood of Vedado, consists of three huge concrete columns crowned by a triangle with a star, representing the Cuban flag in a vertical position.

It is located in the famous and partially dismantled “Anti-imperialist Tribune,” an open-air auditorium built during the term of the late leader Fidel Castro to hold mass protests against the United States.

Although the Tribune was inaugurated with great fanfare in April 2000 during the crisis of the “rafter boy” Elián González, the new Cuban concrete flag has been erected without any publicity, to the point that its name, author or technical characteristics.

Since 2019, the Anti-imperialist Tribune has been undergoing remodeling, a process that has included the dismantling of the so-called “forest of flags”, 138 huge poles with their respective waving flags placed in 2006 and which at the time of their withdrawal were in good condition. advanced deterioration.

This set was added in 2006 in response to the installation, on the façade of the then US Interests Section -now the embassy-, of an electronic panel in which they published political messages considered subversive by the Government of the island. .

Despite being just released, the monument of the “lone star” flag has some flaws and one of the columns is too short, revealing a gap between it and the upper cladding, which has unleashed criticism and ridicule in the social media.

“What can this obscenity offer Cuban monumental art? Very little. Nothing, really, other than mockery,” wrote the art critic Maikel Rodríguez on Facebook, who said he was “tired” of getting used to “the vulgarity, the emerging, hasty, mediocre aesthetic proposals “and he maintained that the national standard” has been worked with success and intelligence in contemporary Cuban art. ”

In addition to questioning the aesthetics of the monument, many of the Internet users also consider the expenditure of concrete and other resources in the new structure inappropriate, at a time when Cuba – with an endemic problem of housing deficit – is going through one of the worst economic crisis in its recent history and almost all products, including construction materials, are in short supply.