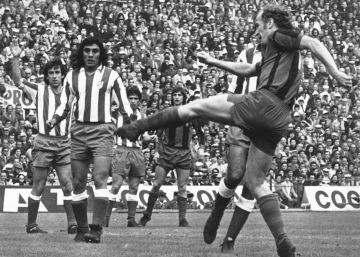 It was the penultimate day of the 73-74 League and Barca was a mathematical champion. I visited Atlético, champion of the previous year, with the desire to stay a more undefeated day. He had exactly 26, all since Johan Cruyff arrived, in the eighth. Before that he had lost his departures to Elche, Vigo and San Sebastián. Since the great Dutch appeared, everything was a triumphant march that included that famous 0-5 in the Bernabéu and the victory at the Camp Nou against Atlético with his unforgettable acrobatic goal. That first Cruyff was a prodigy.

The record without defeats in the League was 28 consecutive days. Madrid had it from 68-69, who aspired to crown without losing when he fell in Elche on the penultimate day. Barça wanted to overcome it. It was important to leave the Manzanares undefeated. Then he would have to receive Valencia and visit Las Palmas. The goal of setting it to 29 seemed at hand. The pitfall was the Manzanares.
For his part, Atlético was like a motorcycle. He came from his tremendous semifinal with Celtic and all the rojiblanca flock was happy and excited. Recall: three expelled in Glasgow by referee Babacan, despite which the match ends 0-0. Then, 2-0 in the second leg that gives the pass to his first European Cup final, in which Bayern will wait for him.

And there was nothing funny about being one more step on the road from Barça to a record. The mere mention seemed a grievance. In addition, he could not be neglected: he needed to stay at least a quarter to go to the UEFA Cup if he lost the final and, although he was second, he only separated two points from the fifth.

So on the eve there is emotion. The game is going to be played on Saturday, April 28. The final against Bayern will not be until May 15, so there is no reason to reserve players. Juan Carlos Lorenzo, coach of Atlético (the “among firefighters do not step on the hose”) practice on Friday the contract to the offside trap that characterizes the Barça de Michels. Capón and Heredia are in charge of appearing from behind to surprise. All that is told by the press the next day, so there were no secrets.

Michels arrives proud and generous in praise for Cruyff: "Channel the game and guarantee 20 goals," he says. At the time, 20 goals were an enormity. Cruyff puts on modest skin: "I'm just one more." Reina, who that summer had gone from Barça to Atlético, says: "I look forward to seeing myself before them." He does not regret having left just when Barça was going to win the League: "Here we go for the European Cup."

The Manzanares is filled with an anxious audience. Atletico makes hallway to Barça, which when it travels in turn puts itself in hallway to applaud Atleti. In his adventures against Celtic he had all of Spain on his side. There is happy atmosphere.

The Aragonese Referee Well, with which the public will be impatient in the first part by the gameplay. The contract is not working out. There are arrivals, startles, good stops, but no goal before the break. The public claims to Ufarte, what Lorenzo attends, taking him out in 54 by Alberto to attack with three. The second half is more moved. In 69 enters Baker by Capón. In 77, still with 0-0, Rexach enters Torres. Barça also wants to go for the game.

Follow the 0-0 at 85 when it starts to rain. It seems like a sign, because just then Melo sneaks into the area and Rifé turns him over. The penalty is final. Luis transforms it with his usual serenity. Barça is stirred and launched into attack. But in '89, a pass from Gárate to Heredia breaks the advanced line and arrives 2-0. Lorenzo's contract has worked. The second goal shines the victory because, Gilera will write the next day in ABC, "Winning for a penalty is always little and debatable …".

The red and white parish is happy: it is a great omen for the next final. Madrid has been done a favor, but for once it doesn't matter. Cruyff praises: "Atlético has a European level of football." And he had it. Two weeks later he was one minute away from winning the European Cup.

Real Madrid: Zidane, fourth attempt at the Cup: his cursed tournament and the only title that resists him