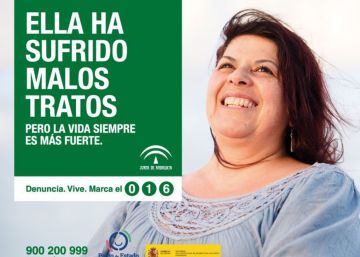 The Ministry of Equality, Social Policies and Conciliation of the Junta de Andalucía presented on Monday a campaign to fight gender violence which in its first week has raised criticism of feminist groups, lawyers and political parties. The posters (showing smiling victims), the fact that there is talk of abuse and not of gender violence and the hashtag chosen for its promotion in social networks (#denunciaVive) has concentrated the greatest reproaches, for understanding that pain is banalized and is responsible only to those who suffer, avoiding the family environment and the aggressor. The launch coincides with the first anniversary of the approval of the reform of the Andalusian gender violence law, one of the main focuses of criticism by Vox, support of the regional bipartite government, and which has not been developed by regulation in essential points to guarantee the protection and protection of those affected.

“The suffering of women who suffer gender violence is being trivialized,” explains Antonia Ábalos, a member of the Association Women Survivors of Gender Violence, on the images of victims in a smiling attitude that the Board has chosen to star in the campaign. "Those who are experiencing situations of sexist violence, women, their children … are not happy or happy," he emphasizes. “Talking in addition to abuse without directly referring to gender violence is misleading, because it can mean that it refers to specific cases, when abuse and violence end the lives of women or with aggressions in droves. Not to name things by their name trivializes and banalizes the life of women, ”says the activist in relation to the motto that appears on the posters:“ She has suffered ill-treatment. But life is always stronger. ” In some, the bottom indicates that the claim is part of the campaign against gender violence of the Board. The television ad begins with the following message: "Attention: the women you are going to see next have been victims of abuse." 1,012 women have been killed in Spain at the hands of sexist violence since 2003, 201 in Andalusia.

Vox has made gender equality and violence policies one of its main axes of confrontation throughout this legislature in the community and achieved include in the agreements for the approval of the regional budgets the term “domestic violence” instead of gender violence. In the debate for approval he even requested that the Andalusian Institute of Women will be called Domestic Violence. The fact that in the campaign of the Board the term abuse has been chosen is considered by the opposition as a clear concession to the extreme right. The spokeswoman for Equality of the Andalusian PSOE, Soledad Pérez, alleged Friday that the initiative of the Andalusian Government was “comfortable for the extreme right”, by suppressing any reference to machismo. "The only measure that the Rights Government has launched has been an institutional campaign that does not work for gender equality," he said. The leader of the Andalusian socialists, Susana Díaz, has joined the criticism this Saturday through a tweet in which he describes the campaign as “frivolous”.

From the Ministry of Equality led by Rocío Ruiz (Citizens) have confirmed to this newspaper that they will not respond to the criticisms of the PSOE and regret that disunity is generated on such a sensitive issue as gender violence. The campaign, financed with 1,200,000 euros from the fund of the State Pact against Gender Violence, will take place in different phases until November 25 and its messages will be disseminated on television, radio, print and digital press, social networks , fences, mupis, buses, subways and trams. During his presentation, Ruiz wanted to put the emphasis on the positive and hopeful message that is transmitted to society by putting the surviving woman as the protagonist and on the importance of conveying the positive message that “the victims are not alone and that it is the responsibility help them all day by day ”.

Delegitimization of the Administration

However, the absence of the involvement of the Administration in the campaign and the fact that the focus is placed solely on the importance of the complaint by the victim, without reference to the steps that public institutions must carry out To accompany the women who denounce, is another focus of criticism by professionals in the sector. “There are more and more women who denounce, but there are many who do not and others who do, but whose personal situation is still horrible,” says Amparo Díaz Ramos, a Sevillian lawyer specializing in gender violence and trafficking in persons. A total of 8,129 women appear as victims of gender violence in the 8,316 complaints filed in the judicial bodies of Andalusia during the first quarter of 2019, according to data provided by the CGPJ Statistics Service. Complaints filed represent an increase of 3.1 percent with respect to complaints filed in judicial bodies in the same quarter of the previous year.

“The Board, the officials, the IAM have the power to inform the Prosecutor and the Courts of cases of violence and they are not doing so. It does not seem right to transfer to the victim that she has the obligation to report, when the administration itself does not comply with what the legislation asks for, ”explains Díaz. The lawyer refers to the general law of gender violence, but also to the reform of the Andalusian, pioneer in the matter, which in its article 30 stipulates that it is the Board that must accredit the situation of gender violence so that, who they request it, they can access certain social aids and benefits, such as changing the workplace for officials. “When we have requested that accreditation we have been told that they cannot process it because it has not been developed by regulation,” explains Díaz, who regrets the Administration's neglect to develop the rules: “This delegitimates the authorities to ask the victims to denounce. "

One year after its entry into force, the reform of the Andalusian law of gender violence, which made the community the most advanced in terms of victim protection, expanding its scope to family members, disabled persons dependent on those who suffer from it or equating cases of sexist violence with sexual assaults, the development of the Comprehensive Awareness Plan and prevention against gender violence and the training program specializing in gender violence for public employees, which the Additional Provision 2 stipulated that they should be approved in the last 12 months, have not been drafted. The opposition accuses the current Government of the Board of keeping the law in a drawer. Vox demanded at the beginning of its negotiations for the investiture of the popular Juan Manuel Moreno as president of the Board the repeal of the law, although later he did not include it in his pact with the PP. The Ministry of Equality warns that the lack of regulatory development is not subject to any political instruction, but is due to the short period of time in which they lead.