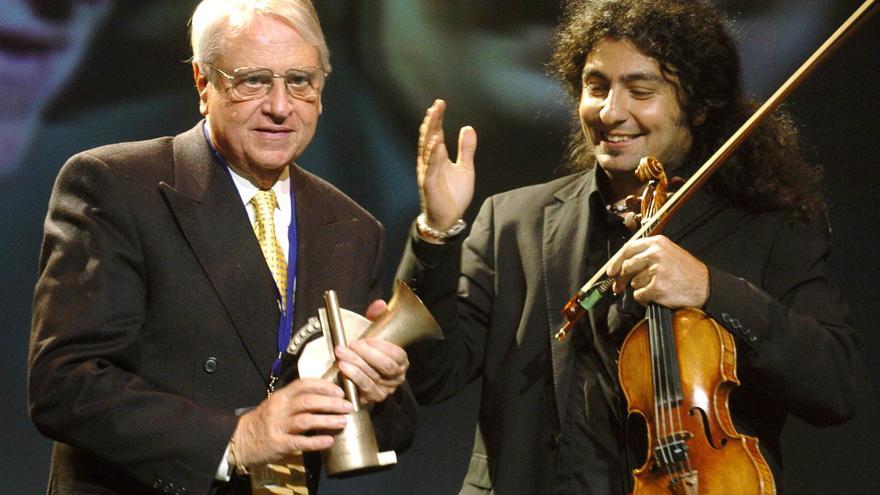 Cristóbal Halffter Jiménez-Encina, died this Sunday at the age of 91, He was one of the most prominent composers of the Generation of ’51 and showed a total commitment to music throughout his life.

As the jury for the BBVA Foundation Frontiers of Knowledge Award, which was awarded to him in 2010, pointed out, he contributed “to the idea of ​​contemporary European music” through his “coherence and continuity of commitment” and worked to reintroduce “music Spanish in the field of contemporary music “.

Born in Madrid on March 24, 1930, was the nephew of the composers Rodolfo and Ernesto Halffter. In 1936 he moved to live in Germany as a result of the Civil War, and in 1939 he returned to Spain, where he began his music studies on his own.

After graduating from the Royal Conservatory of Music in Madrid, where he studied with Conrado del Campo, he won the Chair of Composition and Musical Forms by opposition in 1961 and, two years later, he was appointed director of the Royal Conservatory. In 1966 he resigned from both positions to dedicate himself to creating and conducting orchestras.

In 1967 he moved to Berlin on a scholarship and, the following year, he composed the cantata “Yes, Speak Out”, commissioned by the United Nations, on the occasion of the 20th anniversary of the Declaration of Human Rights. It was premiered at the New York General Assembly.

From 1951 he made his first premieres and in 1952 he gave his first concerts as a conductor. He performed in front of the most important world orchestras such as the Berlin Philharmonic, the Baden-Baden Radio Orchestra, Zurich Tonhalle, the French National, the London Symphony or the Spanish National.

And he composed works that span various genres, from choral, chamber and electronic music to writing for symphonic training.

Among his most relevant compositions are “Elegies on the death of three Spanish poets “(1974-1975), dedicated to Antonio Machado, Miguel Hernández and García Lorca; “Three poems of the Spanish lyric for baritone and orchestra” (1986); or “Sounding mural“(1993), which show constant references to Spanish culture.

In 2018 he composed a work in memory of little Gabriel Ruiz, El Pescaíto, who disappeared and died in Almería. “I was so impressed by what happened there, the wonderful attitude of the child’s mother, the lesson in dignity she gave for everyone, that I said to myself: I’m going to write a work for cello. And I did it in one day,” he then explained to Eph.

For all his work, in June 2014, the composer received the Kulturpreis 2014 prize in the German city of Kiel, which is awarded every two years and was the first time a Spanish musician had won it.

In February 2016 he conducted at the Kiel Opera, Germany, the Philharmonisches Orchester Kiel with the solo performance of Nils Mönkemeyer, one of the most renowned viola players.

Among the many awards he received, the two stand out National Music Awards (in 1953 and in 1988); the UNESCO Composition for “Two movements for timpani and string orchestra” (1956); the Montaigne of the Friedrich von Schiller Foundation in Hamburg (1994); in Spanish Music of the Jacinto and Inocencio Guerrero Foundation (1994); recognition of European Composer of the Year of the Foundation Fordergemeinschaft dar Europeischen Wirtachaft (1994) or the International to the Performing Arts of the Cristóbal Gabarrón Foundation (2003).

And two years ago, in 2019, he received Culturas, the 2019 Egyptian Lyceum of Music Museum Award for being “one of the greatest active composers and conductors”

In 1989 he also received the journalism award from “El Correo Español-El Pueblo Vasco” for his article “On the death of Ignacio Ellacuría”, dedicated to this Jesuit priest murdered in El Salvador, in whom he was inspired to compose his requiem “Officium defunctorun” (Office of the Dead).

He was awarded the Gold Medal of Merit in Fine Arts (1981), Gold Medal of the International Red Cross (1983), Gold Medal of the Goethe Institute of the Federal Republic of Germany (1988), Gold Medal for Fine Arts from the Junta de Castilla y León (1988), Commander of the Order of Cultural Merit of the Principality of Monaco (1994), Leonese of the Year (1995), Community Gold Medal Madrid (2000) and medal from the Palau de la Música de Valencia (2005).

Settled in Villafranca del Bierzo (León), where he died today, he was married to the Villafranquina pianist María Manuela Caro, who died on December 18, 2017, and with whom he had three children: Pedro, Alonso and María. Pedro Halffter has continued his father’s career as a composer and conductor.