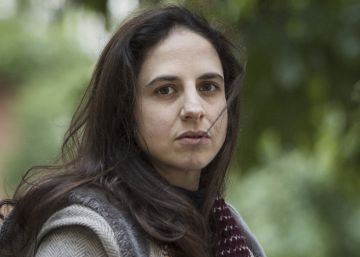 The writer Cristina Morales, awarded the National Literature Prize In the Narrative modality corresponding to 2019, he stressed yesterday that he feels “joy” when he sees the protests against the 1-O sentence in the streets of Barcelona, ​​where he lives, and has defended that it is the police who exercises ”the violence". "It is a joy to see the center of Barcelona, ​​the commercial routes taken by the tourist and capitalist exploitation, of which we are dispossessed who live there. It is a joy that there is fire instead of open shops and coffee shops," he stressed from Cuba in statements to Europa Press.

Born in Granada and graduated in Law and Political Science, Morales has censored against the attitude of the security forces and bodies when responding to protests for condemning the main leaders of the sovereignty process. "The violence is that of the police; the only thing that can be expected of the police. It is a violent body to which there is only the submission or self-defense," He has defended the award-winning for his work Easy reading (Anagram).

Despite this criticism, the winner does not contemplate rejecting an award granted by the Ministry of Culture and Sports, and has stressed that the position of the Government of Pedro Sánchez on the Catalan issue is indifferent. "What they do in the offices does not interest me at all," he stressed. Morales has received this award, endowed with 20,000 euros, as something "unexpected" since it is usually granted to people who have a "greater trajectory". In any case, he stressed that this money will allow him an "economic rest" and the possibility to continue writing.

At the moment it has no project in mind and is focused in promoting his latest work, Easy reading, which tells the story of four women with different degrees of intellectual capacity who share a supervised apartment in Barcelona. In the first quarter of 2020, Anagrama will recover two previously published works of the author: Fighters (Trojan Horse, 2013) and Profanity (Lumen, 2015).

The jury has adopted this ruling "for being a radical and radically original proposal, which does not have a genealogy in Spanish literature and that stands out for the recreation of orality, extraordinary characters and their reading of the political context in which it is developed". "I did not explicitly consider doing anything radical," Morales said, who has also rejected the label of social novel that is awarded. "It is a very poor denomination, a very cheap denomination of bad readers and bad critics," he said.

On the content of the work, he stressed that this book seeks to question the concept of intellectual disability itself, as well as inclusion. "Inclusion is a hoax of democracy because if there is a need for inclusion it is that there is a marginality caused by the power itself, which then appeals to inclusion in a hypocritical and strategic way. The inclusion that public powers preach does not interest me not at all, "he has finished.