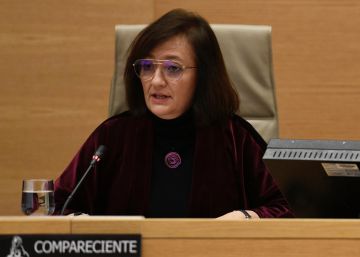 The Independent Authority for Fiscal Responsibility (Airef) was born in the midst of the crisis imposed by Brussels. Its mission was to protect public finances in a context of doubts about its sustainability. After six years of life of the organism, the Congress has validated this Monday the appointment of its second president. With the votes in favor of all parliamentary groups, Cristina Herrero, that had been proposed by the Executive, will replace José Luis Escrivá at the head of the institution for the next six years. At a time of high political tension, no other appointment has led to the adherence of all political formations, including Vox.

Escrivá is now Minister of Social Security in the Government of Sánchez. And Herrero had been his number two in the agency responsible for overseeing public accounts. So all the deputies have praised without exception to Cristina Herrero for her technical profile, her career as an intervener and for having already worked from the beginning in an institution that has earned confidence for her independence. But several of them have also reminded him that he raised some suspicions because his former boss was part of the Executive. And that I would have to clear those doubts.

Although they have given their support, PP and Vox have put a lot of emphasis on warning Herrero of the risk of government interference. Given these allegations, Herrero has indicated that she was not willing to lose the reputation that the Fiscal Authority has achieved.

In her appearance, the new president has stressed that fiscal supervision is the main mission of Airef. But he also stressed that he intends to strengthen the evaluation of public policies. Already the PP Government asked the institution to address reviews of the efficiency and quality of public spending, the calls spending reviews. These are prepared on specific items, and among them, for example, non-hospital pharmaceutical expenditure, policies to reinstate unemployed, scholarships or Correos have been analyzed. The Government of Sanchez has also commissioned others as a thorough examination of tax benefits. And Herrero has expressed his intention to deepen this line of work. And even to go one step further: “I would like Airef to assess the main economic measures adopted,” he has slipped.

For this he has announced that he will try to change the statute of the agency. It will seek that the evaluation is one more task of the Fiscal Authority and that the reviews carried out are monitored, “so that they do not remain in the drawer,” he added. As an example, he has put the Dutch tax authority, CPB for its acronym in English, which has among its powers until valuing the electoral programs.

Herrero has also pointed out that the fiscal rules have presented limitations and that they are being subject to revision even in Europe. In his opinion, it is important to “set goals that are met and adopt a pace that we are willing to meet.” Otherwise, the credibility to lower the high public debt would be questioned.

The head of the Fiscal Authority has expressed her preference to focus on the medium term, so that it can be planned and given certainty. Of course, always distinguishing itself by its ability to issue early alerts, just what differentiates it from other institutions that exercise control ex post As the Court of Accounts.

In addition, he announced that in July he will present the results of the second round of spending reviews. He commented that “there are communities that have a deficit target and others that are lacking.” That is, some are more baggy than others with their budgets. And he explained that the spending rule should be revised, the ceiling set so that disbursements in the medium term do not grow above the economy and, therefore, of income. In his opinion, this rule should be amended to make it more applicable in practice, since it has been worthwhile to fail to comply because the excesses of spending in previous years have been consolidated, rewarding the worst in the class. “Your review could lead to flexibility or not,” he added.

Asked about the surplus of the Town Halls, Herrero has affirmed that the Fiscal Authority only confirms that its finances suffer less pressure than those Administrations that manage pensions or health.