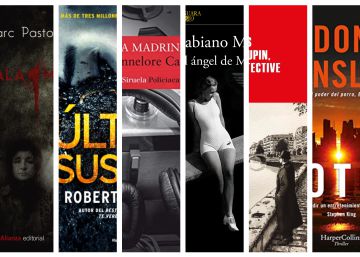 After exhausting much of his heavy artillery after the end of confinementNot from the pandemic, the publishers have kept little material, although sometimes very interesting, for the second half of this particular summer. We have already reviewed the hatching of titles and names of June, all valid to have a great time this August, but let’s see what remains. There are some great names (especially Don Winslow’s), recoveries of classics (Charles Willeford or Edgard Allan Poe), some French surprises and a constant commitment to the hybrid historical novel-crime novel that has given so much success. We are not talking now about contemporary classics such as Philip Kerr or Ben Pastor and their procedural set in the Nazi era (so different and so extraordinary in both cases) but about an even more historical look. The year started well with Niklas Natt Och Dag and his 1793 (Salamander) –What a debut!– or the French classic Hervé Le Corre y su Under the flames (Reservoir Books) and continues apace.

Ambrose Barry is the pseudonym of the vital and now artistic marriage formed Chris Brookmyre and Marisa Haetman –he writer, anesthetist and researcher she– that they elaborate in The corruption of the flesh (Salamandra, translation by Catalina Martínez) an illustrator thriller Historic set in Edinburgh in the mid-19th century. Play in favor of the novel all the information there is about the medical development of the time, rigorously and without overwhelming. Also the rhythm and the argument, very entertaining. And the stark description of the brutality of the Old City gives you the final ingredient.

So in vogue is the look to the past in the criminal genre, and there is so much to choose from, that Alianza rescues The bad woman, by Marc Pastor (not to be confused with Ben, actually María Verbena Volpi, Italian-American), a book published in 2009 by RBA and that goes back to the beginning of the 20th century in Barcelona’s Raval to tell us about a case of the disappearance of the children of prostitutes. Investigated by the couple formed by Moisés Corvo and Juan Malsano, the book focuses on the classic theme of the pedophile network to nurture powerful perverts but it has a powerful twist.

We can say that The Munich Angel It’s one of the thrillers of the year. The book by Fabiano Massimi (Alfaguara, translation by Xavier González) is the result of years of research by the author on a decisive episode in history but not widely addressed: the murder in 1931 of Hitler’s niece. With this premise, Massimi assembles a novel with classic elements –the pair of detectives who investigate it, who take the names from the real ones but who are the part that enters more fully into pure fiction–, brilliant twists and an impeccable historical setting through which it portrays the tensions that were experienced in Germany at the dawn of the Nazi rise to power and the disputes around Hitler that ended with the lamination of the SA and the elimination of leaders –chance?– they could have the key to the case.

Don Winslow is the great figure at the news table in recent weeks. The author of Border (Harper Collins) hits bookstores with Broken (translation by Victoria Horrillo), a set of six uneven short novels but with excellent examples of good police literature. It is always interesting to see an author who is so fond of the large format operate in shorter ways.

Let’s review the three most interesting. The story that gives the book its title and opens it is an intense plot of cops and revenge in New Orleans with all the ingredients of an action movie: rhythm, violence and spectacle. There is no room here for the moral disquisitions of the protagonists of the trilogy opened by The power of the dog, but the result is remarkable. The second story is a total record change. In Code 101 we have a skilled and charismatic thief, discreet and attractive, who programs his life around his perfect shots. But something has to go wrong, of course, because there are few good robbery stories other than the story of a robbery that ends badly. And every story of a thief is also of the one who pursues him. The book is worth buying just for this little taste of flawless genre from start to finish. The third is The last race, in which Winslow, who has described the drug world like no one else, returns to the territory of the border, the one he knows and controls best (he lives in San Diego and spent 12 years researching for The Border) to give us the crudest and most political of all, a small novel within the genre that, now, has a moral scope.

Recovered classics and a couple of surprises

Charles Willeford (1919-1988) is a classic of the American crime novel. Creator of Hoke Moseley, the unforgettable protagonist of Miami Blues, the rest of his black criminal work has not been widely promoted in Spain (Sajalín has published, for example, the crude Game-cock). Now it comes from the hand of RBA, with a translation by Pilar de la Peña, A masterpiece. It is a story of thefts and art that has much more behind it. Willeford’s ability to create characters with moral conflicts is seen here in all its expression in the journalist who has the chance of a lifetime if he does the right thing and the chance of a much richer and more glamorous life if he bent on breaking the law.

The other classic that returns to bookstores recurrently is Edgard Allan Poe, the father of the modern detective, with his stories of Dupin. In this case, those from Periférica are the ones who bet on The mysteries of Auguste Dupin, the first detective, which includes his first three cases. Do not attend so much to the mythical The murders on the rue Morgue, as cool The stolen letter oa The Marie Rôget mystery, where it is already part of our contemporary fascination for true crime.

In the field of surprises, as a coda to this brief list of news we can include Godmother by Hannelore Cayre (Siruela, translation by Susana Prieto), a true phenomenon in France. Starring Paciencia Cienfuegos (translator from Arabic to the French Ministry of Justice, owner of a dog, mother of two daughters, girlfriend of a police officer and so on) who, tired of being defined by what she is in relation to others, crosses the line and become a dealer. The budget, unlikely risky, is resolved with grace and arrogance.

We end up with Last breath, by Robert Bryndza (Roca, translation of Santiago del Rey), thriller hit author’s beach I’ll see you under the ice that has young victims, a fierce policewoman, countdown to save the last kidnapped by the bad guy and all the ingredients of a thriller It gives everything it promises and perfect for those looking for a hassle-free page flip.

Jennifer López will be the protagonist of ‘Atlas’, a Netflix movie