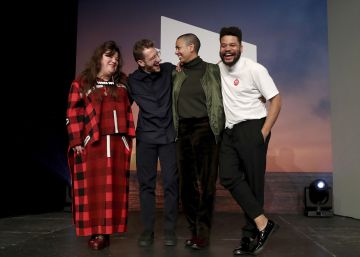 The surprising decision of the Turner jury to award the prize to its four finalists, praised and almost equally questioned, has opened a debate in the United Kingdom about the supposed obsolete nature of competition in art. Gesture unprecedented in the history of the award, announced Tuesday night, obeyed the request of the nominated artists, erected in a group that wanted to stand up with a united front "to these divisive times."

The Jordanian Lawrence Abu Hamdan, the Colombian-born London Oscar Óscar Murillo and also the British Tai Shani and Helen Cammock will distribute the 40,000 pounds of prize money (which establishes 25,000 pounds for the winner, and 5,000 for each of the finalists) after the latter rose to the Turner stage to underline the character of "community, multiplicity and solidarity" of the group. The four say they are convinced that this vindication is incompatible with a competitive format that tends to "divide and individualize." And so they let the jurors know last October, in which it has been one of the (unusually) best kept secrets in the world.

Will the finalists next year be forced to do the same? It is the question posed by critics. The outcome of the current edition of the Turner "has been very specific this year," the jury president Alex Farquharson replied, who along with his colleagues unanimously decided to accept the proposal of the "collective" nominees. In their joint declaration, this group of artists who address in their works the effects of globalization in the workforce, torture in prisons of the Syrian regime or discrimination based on gender and race denounce “an era in which the rise of right and fascism in a hostile conservative environment has made many of us unwelcome in Britain. ”

Beyond the strong political burden of the proclamation (which has its detractors in those who think it displaces the main subject of the prize: discovering the new talents of contemporary art), the solution agreed by the candidates and the jury of the Turner sets a precedent which will have to be dealt with in the future. The winner of the award in 2016, Helen Marten, already gave wings to those who consider this type of competitions an anachronism: she decided to distribute the economic endowment – although not the prize itself – with the other three opponents, claiming her refusal to “promote a hierarchy".

The growing difficulty of jurors has also been stressed, in a variety of contests in the world of arts and letters, when designating winners and losers. Recent there is still the controversy over the granting of the Booker, last October, to two of the finalist authors, when the rules of that literary prize banned that type of division until then. The panel of judges then admitted their inability to opt for the consecrated Margaret Atwood or the promising Bernardine Evaristo. After three rounds of voting, they gave up. The reactions confronted the defenders of giving Evaristo a "quality and consistency" a chance, since Atwood is already the protagonist of a "titanic race", with whom they remembered that the Booker judges individual novels and not a single song.

Far away and the times in which the Turner Prize for contemporary art made great headlines for its provocation, the malicious point to trying to regain relevance with an unprecedented outcome. If the objective was to generate debate, it has been successfully accomplished.