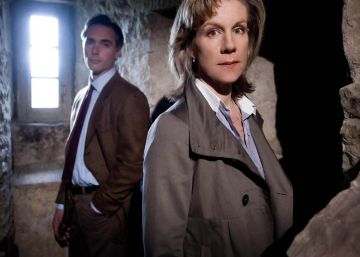 In the golden age of movie clubs, coinciding with the glare of movements like the free cinema wave nouvelle vague, moviegoers and critics began to distinguish between what they themselves called "author cinema" and "artisanal cinema". Moved to the fiction series, The place of execution, British miniseries that can be seen on Amazon Prime Video, would be classified as a handmade product.

In reality, the basic difference of the division lies between those who put forward a desire to demonstrate their creative talent and those who try to tell a story in the best possible way and in a way understandable to the most, which is the case of the series directed by Daniel Percival, with an excellent script by Patrick Harbinson based on a novel by Scottish Val McDermid.

The great The place of execution It does not pretend to entertain the spectator with the police inquiries to find the culprit of the disappearance of a 13-year-old girl in Derbyshire, in the East Midlands. The evidence of the investigation, with the possible murder of the child, points to the richest man in the town. 40 years after the events, when Justice acted as severely as possible on the suspect, the investigative work of a television reporter who makes a documentary on the case disrupts everything known to date.

And here one of the virtues of the platforms is checked on-line: its ability to rescue series and discontinued films that deserve to be recovered. The production is from 2008, with the peculiarity that was released as a 138-minute feature film, subsequently converted into a series.