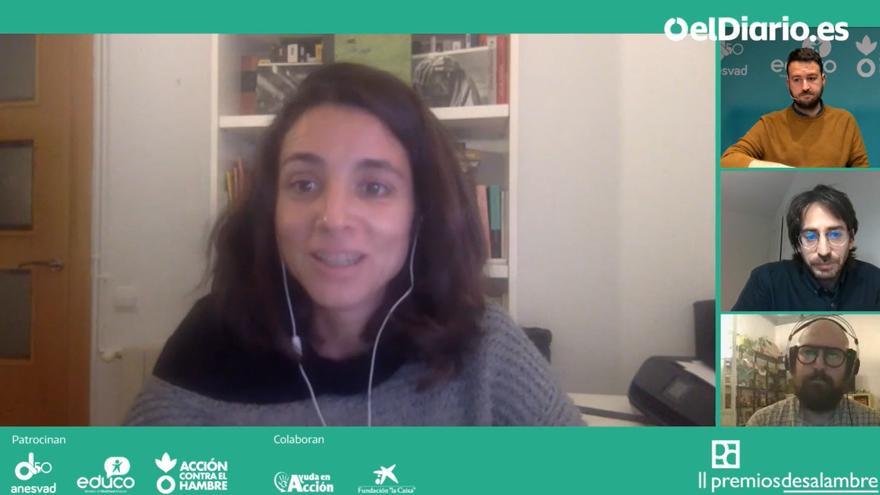 From the temporary migrant camps in Andalusia to the walls of the Gaza Strip. From the interior of the nursing homes that suffered the most from the effects of the first wave of the pandemic to the networks that were organized in the neighborhoods to help the neighbors hardest hit by the crisis. The humor against racism, the different and responsible look on the harsh effects of the border. They have all starred the second edition of the Deslambre Awards, which have been held this Thursday in a virtual event to learn more about the work, effort, motivation and concerns of the winners and winners.

In a difficult year, the pandemic has marked both the form and the substance of the awards, created by elDiario.es to recognize, promote and applaud professional quality and personal dedication to human rights.

“There is no audience, but we do feel on the other side of the streaming to a lot of people who are still very interested in how those who have less social support network are having, “explained Juan Luis Sánchez, deputy director of elDiario.es, from the Caixa Forum in Madrid.

“We come here to recognize the work of journalists and social organizations that during this year have given up all their energy, despite the fact that they are probably also going through a difficult personal or economic situation. To recognize that effort we could not give up precisely this year, despite the difficulties, “he added. The celebration of this second edition has been sponsored by Anesvad, Educo and Acción contra el Hambre and the collaboration of Ayuda en Acción and Fundación ‘La Caixa’. If you have missed it, you can watch it again in this video:

“We are especially excited to recognize the work of those journalists who have maintained the focus on human rights in such a difficult year for everyone. They could have been daunted in a year so full of uncertainty, but our winners have continued to denounce those injustices that mark our day by day, and also the news that we try to tell from Desalambre “, said Gabriela Sánchez, coordinator of Desalambre, the section specialized in human rights of elDiario.es.

“We have had a luxury jury,” he added about the team that failed the awards, made up of information professionals awarded for their work and experts in the field of international cooperation, human rights and fundamental freedoms: Olga Rodríguez , Alberto Arce, Irene Milleiro and Gonzalo Fanjul, as well as Juan Luis Sánchez and Gabriela Sánchez.

Neighborhood networks, residences hit by the virus and anti-racist humor

Before giving way to the awards, Iñigo Lasa (Anesvad), Pilar Orenes (Educo) and Marta López (Action Against Hunger) spoke about some of the most important concerns in this very complex year from the point of view of the third sector, from the fight against neglected tropical diseases and the diversion of resources that has left other problems behind, to the rights and well-being of children, through the social emergency and hunger.

Hundreds of anonymous citizens have tried to fight against hunger and other problems who, since the declaration of the state of alarm, have dedicated their time to seeking solutions in record time to the thousands of social needs that have not been covered by the Administration. It is the reason why the jury has recognized with the Deslambre award for the best campaign to the different associations and neighborhood networks who were dedicated to the distribution of food and social accompaniment during confinement. Two of them, the Aluche Neighborhood Association and Valiente Bangla, were present at the event.

Ana Isabel del Rincón has told how from her small organization in the Madrid neighborhood of Aluche they launched themselves to support the neighbors who called desperately because they were trying to talk to social services, had become unemployed or found themselves in a very precarious situation. “The neighbors responded to our call despite fear of the virus,” Rincón recalled. “It would have to be the administration that takes care of this.” For his part, Mohammad Fazle Elahi, president of Valiente Bangla, from the Lavapiés neighborhood, has investigated the difficulties that many members of the Bangladeshi community have faced during the pandemic due to the language barrier and being in an irregular situation. “From March 14 until now, immigrants do not have papers, they do not have any help. People are in a very serious situation, they cannot pay their rent.”

Then it was the turn of Ximena DiLollo, coordinator of the residency project at Doctors Without Borders during the pandemic in Spain. The NGO has won the Desalambre award for best research for its report Little, late and bad. The unacceptable helplessness of the elderly in residences during COVID-19 in Spain. The health crisis prompted MSF to adapt its experience in emergencies in countries in conflict to deploy support resources in hospitals and nursing homes in Spain. From the first months, the organization warned of the lack of health care received by those infected in residences. In August, they compiled the information obtained in nearly 500 centers across the country and documented a series of “structural failures” detected that led to the abandonment of these people. “We were very struck by the loneliness and helplessness of the residents and the staff who were working. Many patients were dehydrated. Not having access to water in Europe we would never have imagined it, “said DiLollo.” The goal is that it does not happen again. ”

The Desalambre award for activist of the year has gone to Yu Fu, known to thousands of young people for her channels on YouTube, TikTok or Twitter. With his videos he seeks to counteract, with irony but in a didactic way, the racist messages focused on the population of Asian traits, a task that has been especially important this year, since the origin of the COVID-19 pandemic in Wuhan unleashed a wave of xenophobic discourse against this community. In a video, Yu Fu explained why she took to using social media to break down stereotypes. “There is a lot of racism. In all my videos there are comments of the type ‘fucking Chinese virus’. What touches my heart the most are the messages from young people with Asian features who write to me to thank me for the videos and give them a voice. video, we can make the world of tomorrow better than the world of yesterday. ”

The best journalistic works and perseverance

Next, it was the turn of the winners in the Journalism categories, they looked for quality journalistic works with a human rights approach and they have taken into account both depth and rigor as basic precepts of journalism, such as innovation and creativity to the treatment of stories or phenomena that deserve to be told in the most effective and rigorous way possible.

Anna Surinyach, photojournalist specializing in migration and human rights and graphic editor of 5W magazine, has been recognized with the Deslambre-Acción contra el Hambre award for perseverance. His works are characterized by a different, sensitive and responsible look. “With the pandemic, we reinvented ourselves and had to document what was happening here. Throughout 2020, I have fought first with COVID-19 and for continuing to document population movements. It is becoming increasingly difficult to access the sites. It has cost us a lot to work on COVID and now that we have been in the Canary Islands we see that it is increasingly difficult to access, for example, people who They have been so long on the Arguineguín dock to talk to them. ”

The Desalambre-Anesvad award for the best report has gone to Day laborers of the pandemic by Guillermo Abril, published in The weekly country. It is a tour of the key points of the Spanish fields, the fruits of which are mostly collected by migrant seasonal workers in difficult circumstances. “Just before the pandemic, it was the Vox phenomenon. And suddenly, the pandemic arrived and left the seams of the system in the air, and made us see in a very graphic way those who could stay at home and what they could not”, April has remembered. “They are totally abandoned people, who come to the Canary Islands and then do what they can, set up a shack. There are thousands of people in Spain and in the EU. They are the ones who, while we were at home, were at the foot of the canyon” .

Finally, Manuel Tomillo has told the reporter work behind ‘Gaza, between two walls. Christmas story‘, a sound documentary about refugees in Palestine broadcast live by Carne Cruda, directed by Javier Gallego, in collaboration with UNRWA, which has been recognized with the Desalambre-Educo Award for the best multimedia work. Through the podcast and recorded with the public and live music, the program takes listeners to the day-to-day in Gaza, with the stories of the people who live there. “It is a way of trying to tell a reality that has been told many times and that is very different from that experienced in Spain. It is trying to turn it around to tell a difficult reality to understand such as being a refugee, living under constant conflict and under an Army that constantly controls you “, explained Tomillo.