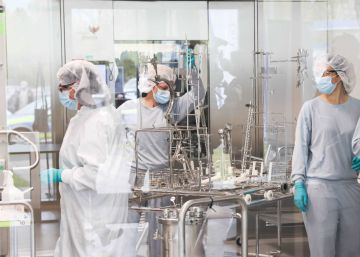 The Administration of Joe biden It caused an earthquake in the pharmaceutical industry on Wednesday night by accepting, in an unprecedented decision, that the United States negotiate the temporary release of patents for Covid-19 vaccines within the World Trade Organization (WTO) . The ultimate goal is to accelerate distribution to poor countries to end the pandemic sooner. The measure raises many questions: how it would be done, what compensation would the pharmaceutical companies that give up their knowledge assume and, above all, doubts about the deadlines, since manufacturing these products is not simple or immediate and the negotiation in the WTO can also be eternal .

At the corporate level, the losers of the decision may be specialized Western biotech companies that have their own coronavirus vaccines already approved or under investigation. As winners, large manufacturers that currently do not have vaccines, both generic companies and other producers in India and other countries.

Difficulties in the WTO

The first major stumbling block is the negotiation itself in the WTO. South Africa and India have spearheaded the proposal for IP in Geneva, but are currently planning to present a proposal still under development. All countries should agree unanimously, as there is the right of veto. Germany, for example, does not have a favorable opinion. The proposal will be presented in the next few days and must be discussed on June 8 and 9.

Ten WTO meetings in seven months have failed to produce progress, with 60 sponsors of proposals from emerging economies, backed by Nobel laureates and former world leaders. Until now they had faced countries such as the USA, the members of the EU and Switzerland, where many pharmaceutical companies are based.

How it is released

There is no clear mechanism on how to release patents. The commercial legislation allows an expropriation –with compensation to the pharmaceutical company– or the granting of compulsory licenses –with the payment of royalties to the affected laboratories. This is stated by Gonzalo Ulloa Suelves, honorary president of Gómez-Acebo & Pombo Abogados, in an article in Economist & Jurist. But we must wait to what extent is agreed within the WTO.

Furthermore, the mandatory release model takes time and has to be requested by a country. There must be a prior emergency declaration and ask the affected company to lower the price of the product or grant that license, for which the manufacturer can take three months to respond. "There could be a new, more operative procedure", believes Xosé María Torres, patent spokesperson for the NGO Farmamundi and member of the European initiative Right2Cure.

The problem of time

Biden takes the initiative to make it easier for vaccines to reach more people. But in the announcement, US trade ambassador Katherine Thai herself assumes that the WTO negotiation "will take time" to reach a consensus.

It is precisely in this aspect that one of the criticisms made by the pharmaceutical industry of the Biden Administration's decision occurs. According to Duke University calculations, current manufacturers will already be able to produce 12,000 million doses by the end of the year, practically to immunize the entire world population. Unicef ​​raises it to 15,000 million this year and 39,200 million next year if all those that are currently in R&D are successful. For this reason, according to the Farmaindustria employers' association, the problem is not one of production, but rather "it lies in the equitable distribution of the vaccines produced."

In fact, Biden's measure has been seen as hypocritical within the industry and in other countries because it arises when at least 45% of Americans have been administered a dose and after the country has imposed restrictions on the doses. exports. Therefore, it is suggested that the best measure is to distribute production through the Covax initiative to low-income countries.

The main reason for releasing patents is that there is an unused industrial capacity, which is delaying the arrival of vaccines, says Torres, from Farmamundi. In fact, remember that companies such as the Israeli generic giant Teva and other smaller ones such as the Bangladeshi Incepta, the Canadian Biolyse Pharma or the South African Biovac have offered to the owners of the patents to manufacture and have not received a response.

Another reasoning of the defenders of the measure is based on the fact that a large part of the financing of the R&D of these laboratories comes from public investment or from large supply contracts with developed countries. The think tank Policy Cures Research reports that public and philanthropic resources in the development of vaccines exceed 4,500 million euros.

From the Farmaindustria employers' association, it is recalled that the manufacturing process is very complex and requires specific knowledge, state-of-the-art technology, adequate facilities, trained human teams and an experience that, at present, is only available to a few companies. “There are many other companies that can collaborate in some phases of the manufacturing process, but still require a technology transfer from the developer. In fact, some of these vaccines require more than 250 different components that are manufactured in more than 50 different facilities in more than 25 countries ”, they affirm.

Torres, from the Right2Cure initiative, explains that he effectively sees it as practically impossible for there to be companies that can copy messenger RNA (mRNA) vaccines, which are those from Pfizer / BioNTech or Moderna. "It is a galactic technology, super novel," he acknowledges. But he does believe that the most classic vaccines from AstraZeneca, Johnson & Johnson or Novavax, among others, could be replicated. This expert also emphasizes that the release of the patent, the company does not release the complete industrial secret, since the know-how or know how It's not included. "There should be a technology transfer," he laments.

Companies that copy vaccines will have the advantage of not having to repeat clinical trials (on thousands of volunteers) with patients. But they must have the approval of the authorities regarding the production processes and that the standards of good manufacturing practices are met, as recalled from health sources. That would mean that, in addition to the time consumed in the WTO, it would also be necessary to add the months of industrial preparation as the pandemic advances.

The pharmaceutical sector sees the current model of agreements between the companies that have developed the vaccines and other suppliers and manufacturers as partners as more useful, although the delay in reaching these alliances is highly criticizable. Large companies such as Sanofi, Novartis or Bayer have reached agreements to collaborate in large-scale production.

The world employer Ifpma recalls that in April there were already more than 270 voluntary collaboration agreements between companies for the production of vaccines against Covid, involving a hundred companies and thirty countries.

The promoters of the exemption say there can be no repeat of the early years of the HIV pandemic, when lack of access to medicines cost millions of lives in places like Africa. In 2020, more than half of all people living with HIV are living in southern and eastern Africa, according to UNAIDS.

The director of the World Health Organization, Tedros Adhanom Ghebreyesus, and 375 civil society groups such as Doctors without Borders support the proposal. Former leaders, from Britain's Gordon Brown to former Soviet Union President Mikhail Gorbachev, had jointly asked Biden to support the initiative.

The release of patents for Covid-19 vaccines would not affect the companies that develop it equally. For example, the profits of large conglomerates like Johnson & Johnson, Pfizer or AstraZeneca depend on many other products. "We observe that in case of adoption of an exemption, we see a minimal negative financial impact for the main pharmaceutical companies, given the expected price of the vaccine in less developed markets in relation to their main business," they point out from Citi.

Loss of incentive to innovation

Laboratories and smaller biotechnology companies that have developed or are investigating vaccines against Covid and that practically all their income depends on these products are the most affected ones: BioNTech, Novavax, Curevac ... It also raises doubts about the loss of incentives that the producers of new vaccines that currently have clinical trials and second generation may have, because if they do not maintain the patent that protects their sales, their investments are in danger.

“The current patent system generates a framework of protection and trust for the vaccine developer, which is essential to be able to carry out this transfer of technology, which is what, in turn, guarantees the quality, efficacy and safety of the vaccines produced by those that they have not developed them ”, they point out from Farmaindustria.

The main beneficiaries may be the large generic and vaccine companies that have already shown an interest in this production, such as the Israeli Teva or other European or Indian producers.

"Pharmaceutical companies will be interested in the patent exemption being narrow and limited in time, to avoid setting too negative a precedent and discouraging future research and development," they explain from the analysis firm eToro. Some of these companies, such as Astrazeneca, have been supplying their vaccine at cost and Novavax announced in October that it would not enforce its patent.

Jeronim Perovic: "As long as the world needs fossil fuels, Russia will play a role in the energy market"

These are the cheapest hours of electricity this Saturday June 25

“It had nothing to do with inflation”