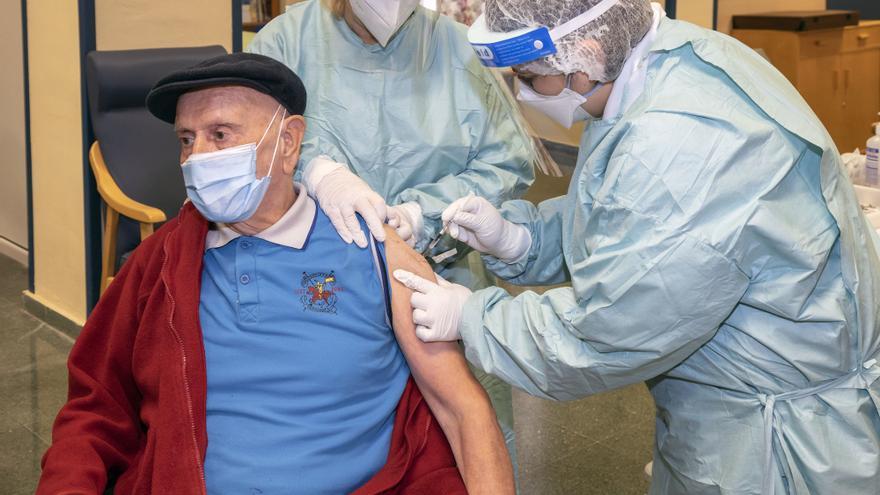 The Government has published this Tuesday detailed and updated data on the incidence of COVID-19 in homes for the elderly and people with disabilities, and in them there is a clear decrease in the incidence since the vaccination takes effect. The week of January 18, 2021, the peak of the third wave, there were 4,895 users of residential centers infected. On February 15, 2021, there were 243, 95% less. During that same period, the number of infected among the general population also decreased, but less, by 80% (240,000 weekly cases compared to 48,000). The peak of the third wave coincided with the moment in which second doses of the Pfizer vaccine began to be administered, so that the first inoculated then had full immunity against severe disease.

If only the elderly centers are taken, from January 18 to February 15 the cases go from 4,439 to 215. So 12.4% of the centers had at least one outbreak, by February 15 it was 2%. The data is collected by the Ministry of Social Rights through the Imserso and from what is provided by the Autonomous Communities, fulfilling the commitment reached in the Interterritorial Council of Social Services on December 2. These figures must also be submitted to the European Center for Disease Prevention and Control. Imserso sources describe them as “hopeful.” They believe that the reduction is due in part “to the measures adopted by the Communities and agreed in the Interterritorial Council”, which demonstrated their effectiveness, according to these sources, because the impact of COVID-19 was less in the second wave than in the second wave. first. But it also reflects the effects of “immunization in residences in all territories one month after starting the vaccination, which allows us to observe a third scenario of greater tranquility in the field of residences. It is very important to restore normality and contacts for these people. ” They highlight the “impressive effort” of professionals in the last twelve months.

This Tuesday they publish for the first time the evolution of the number of institutionalized elderly currently affected by COVID-19, but they also certify the calculation of those who were victims throughout 2020. During the first wave there were 31,816 elderly people diagnosed with coronavirus; 9,976 deaths with diagnosis and 9,859 deaths with compatible symptoms. During the second wave, considered until January 3, 2021, there were 36,929 elderly residents confirmed with the disease, and 6,305 deaths. Among the three waves, also with those who died in January, they add up to 29,408. The first and second waves had a fatality rate of 23.7%.

Neither from Social Rights, nor from Health, nor other experts, directly attribute the decrease in cases between January and February in residences only to vaccination, because other factors are yet to be analyzed. They can affect general restrictions and high seroprevalence in residences (many users have survived it and have some acquired protection). But they do agree that it is a clear indication that it is working.

From January 4 to February 21, 2021 3,350 people with confirmed COVID-19 died in residences (the vast majority in nursing homes). The weekly death toll has also been falling: that of January 25 was 739 and that of February 15 was 158. A drop of 80%, the general one has been 60%. The immunization campaign began on December 27, so many elderly people who died in January and February did not have time to vaccinate or take effect because they were already infected or were infected between doses. Health does not recommend inoculating residences where there are active outbreaks, or COVID-19 positive patients.

Until now what Health reported was a decrease in the number of outbreaks and their associated cases that did not stop. The Ministry of Health has also explained that the incidence among people over 65 who always live in residences, since the first wave, has evolved at the same rate and above that of those over 65 who live in homes. Until the middle of this January, when that trend changed and that of those who live in residences plummeted below that of those in homes. In this report this Tuesday they are separated by dates and by Autonomous Communities, in the absence of Aragon. Social Rights accounts for a total of 327,814 users of residential centers throughout Spain. And there are 1,261,848 fully immunized people throughout Spain.

A relief, but still to be analyzed

Amós García Rojas, president of the Spanish Association of Vaccination (AEV) and a signatory of the national vaccination strategy, explains to this newspaper that the outlook so far is “preliminary”, but the “decrease in cases and outbreaks where it has been vaccinated it’s marked and you see the impact, fortunately. ” “It is to be expected, although there may be other factors, but it is evident and it is a relief,” he added. José Antonio Forcada, president of the Nursing and Vaccine Association, an entity also part of the strategy, specified that “without the need to delve into the studies, it is already observable that the incidence has decreased. On the one hand, “thanks to the vaccine.” On the other, “different measures have been adopted, the general incidence has dropped, and the prevalence in residences is high, more than among the general population.”

Forcada remembers the deadlines: “14 days after the first dose for a partial immunity; one or two weeks after the second, immunity for 95% who is injected”. For this reason, it is reasonable that they are already observed, but “there are still residences where vaccination continues”, either due to delays or different vaccination rates, “or where they have just finished vaccinating.” So “we have the majority, but we have yet to see results.” For now it is only confirmed that vaccines prevent serious disease, and not transmission. Although more and more studies suggest that they also cancel the contagion, and in countries with the most advanced campaign, such as Israel, it is already noticeable in the general number of cases.

The residency coordinator of the Association of Directors and Managers of Social Services I also corroborated this information a few weeks ago with the data they handle: “In the centers we are detecting that vaccination does work, the directors tell us that there are fewer cases. And we have the same rhythms of life as a month ago; the only differential fact has been the vaccine. Yes it is true that we have been more attentive until the 10 days after the second dose have passed, we have asked the visitors to be even more cautious. But the routine has not changed. The general perception is that. And that the outbreaks that we see are more residual and occur in centers that they were in the red, already with cases, with danger that the number would grow “. In some residences they are already beginning to allow users to leave, and visitors with precautions, when it is now a year since they were closed.