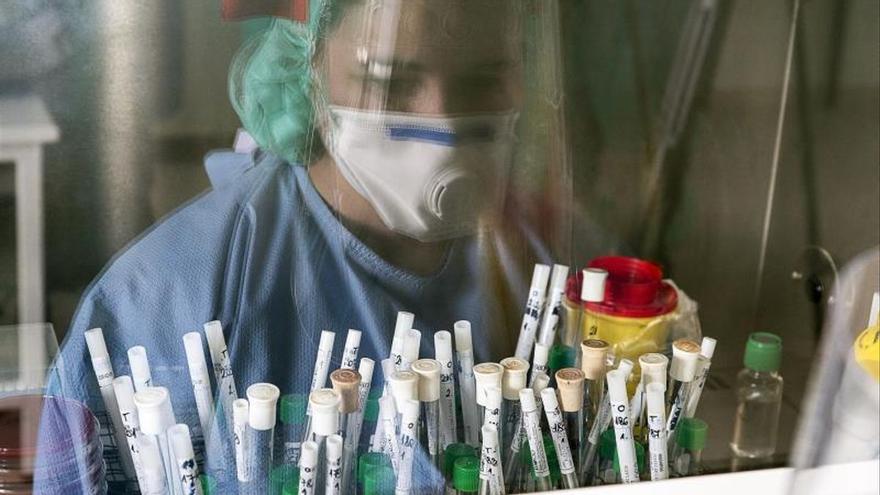 The list of symptoms of the coronavirus has been getting longer in recent months. The table of cough, dyspnea and fever that appeared in the protocols of the Ministry of Health in March is now a large catalog that includes gastrointestinal conditions, headaches or mild signs of catarrh (sore throat, mucus or low-grade fever) that before the epidemic cared for themselves at home without having to go to the health center. Primary Care physicians warn that with so many possible symptoms and the hypersensitized population – out of fear and also because of responsibility – consultations are multiplying. And it’s a warning because the cold and flu season hasn’t started yet.

The only way to discriminate if it is COVID or not is with a PCR. It translates into data: all communities have increased the number of PCRs that were performed at the beginning of the ‘new normal’. Proportionally, where the most has happened is in Aragon, where they have multiplied by six. In the week of June 26, throughout the country 370 tests were carried out per 100,000 inhabitants; in that of August 7, there were 814. The increase in diagnostic tests is due to two reasons: the proper functioning of contact tracing, investigating all the people who have been related to someone infected; and that more and more people come to the health center reporting symptoms.

Evolution of PCR tests carried out every week for every 100,000 inhabitants in each autonomous community

With few or no reinforcements in some communities and part of the workforce on vacation or sick leave, in Primary Care they fear that this situation will show them collapse again. The reality, however, is not identical in all territories; the greater the number of infections, the more you suffer. In Madrid, a region that already accumulates one in three new cases, the main health unions (CCOO, Amyts, CSIT and UGT) have denounced in a report that the Community of Madrid has not complied with the promised reinforcements – 2,844 professionals are still to be hired, according to their data – and that sometimes the centers do not have Sufficient evidence for daily demand. They also warn that there is “a great physical and emotional overload” in workers. They ensure that part of the functions of the trackers falls on them and they ask for a “communication strategy” directed at the population on the operation of Primary Care.

“We were amazed with the positive PCRs that come out”

In the Fuenlabrada health center directed by Mar Noguerol, vice president of AFEM, in July 20 PCRs were done daily and now there are days that count a hundred. So it was rare to see a positive. No longer. They do more tests and also get a higher percentage of infected, he says. She has been doubling shifts for several days. “We have even done tests for conjunctivitis, lately for skin rashes. More and more people come who smell more like COVID-19. And still we are amazed with the positive PCR that come out. I do not know, for mucus, for example,” he illustrates .

The large number of symptoms associated with COVID-19 makes this daily work difficult for health workers. Doctors believe this situation will get worse when temperatures drop and cold and flu season begins. At plan of the Ministry of Health against outbreaks It is included that this course is reinforced the number and distribution of doses of influenza vaccines at the state level. “It could be to tremble because people with snot and tenths will come. And it is logical because people are nervous. COVID-19 can emulate many different symptoms. And it does not mean, for example, that all diarrhea, very typical of summer Be it coronavirus, “says Dr. Salvador Casado, who works in a center in Soto El Real and assures that what he lacks is” time “to” be able to think “and” study “each case. “The system begins to be unable to respond because it is collapsing,” he says.

“There is no health system that can withstand the protocol without reinforcements,” says Casado, who predicts that things “look bad.” The health workers even begin to perceive a certain “picaresque” in the population that, scared, asks to have the PCR, blaming some symptoms. Diagnostic tests are performed, by protocol, on symptomatic patients and also automatically on all close contacts once a positive is known. “Until July, contacts were isolated and followed up. PCR was only performed if they developed symptoms. Not now and that has increased the number of tests,” explains Noguerol.

“Arriving on a Monday and having 17 PCR positive is tremendous”

Aragon has been the first part of this summer, together with Catalunya, the community that has most concerned Health. The unions of Primary Care Physicians of Aragon (CESM and FASAMET) issued a statement on August 4 requesting “urgent measures” from the regional government. So, 14 days ago, in that community the cases continued to escalate; Today the situation seems somewhat more “stabilized” –according to Health values–, but that is not reflected in Primary Care, as Sara Sastre, family doctor, union delegate and spokesperson for FASAMET says. Mainly in Zaragoza, it is still “overwhelmed”.

The factors are many. One is structural, “the workforce is depleted, there are more and more retirements without relief personnel, people are exhausted, there are many casualties due to COVID-19 or because they are contacts.” Another is the same one reported in Madrid: the disease is becoming more complex. “At first there were three clear symptoms that were repeated: cough, respiratory distress and fever. Now we are talking about a lack of taste, diarrhea … everything is the possibility of COVID-19. And at the least you have suspicion, you have to call and assess, even by phone. Sometimes it is and sometimes not. ” With a situation of community transmission, “people are worried and are also called by, for example, mucus or dinorrhea. There is still uncertainty: in those cases, if you have not been in contact with positive, it is recommended to follow up and be attentive if it starts with a cough. ”

The fear is that the situation will get worse with the end of the holidays. Among the measures that they are demanding from the Government of Aragon is a very specific one to “decongest” Primary Care from the workload involved in diagnostic tests: perform PCR inside the vehicle, “as was done for a few months at the Military Hospital of Zaragoza, but it was stopped “.

Another consequence of the high number of PCRs is that the results take longer. “The objective is that they are in less than 24 hours because now it is taking three days,” says Sastre. Marisa Fernández, a nurse at a center in Vallecas (Madrid) and head of Primary Care at CCOO goes along the same lines. “We were in 48 hours and we are already going for about four days” between the time the test is done and the positivity or negativity is known, he assures.

In most communities, an attempt is made to resolve queries, if symptoms allow, by telephone. It is the first filter to avoid queues in health centers and avoid exposing patients to what is considered “a source of contagion”. In some provinces, as reported by health workers in Soria, calls are crowded and there are difficulties in making an appointment. That forces them to spend long hours on the phone and make it compatible with face-to-face visits. The patients who demand more time, say the consulted doctors, are those who have just given positive in a test, because in many communities the Primary practitioners assume the forefront of tracking the cohabitants. And they do a first prospecting, sometimes due to the lack of external trackers, of the contacts through an interview. “Arriving on a Monday and having 17 PCR positive is tremendous,” exemplifies Noguerol.

“It has not been a typical summer”

Mabel Arciniega, from the Euskadi Medical Union, talks about the situation in her community in similar terms. The saturation in Primary qualifies it as “historical, at least it comes from 10 or 15 years ago”, but COVID “aggravates everything”. Usually, there is always a shortage of workforce in summer, “which are covered between colleagues these months” without hiring, but this “is not a typical summer.”

It is not a summer like others because, to begin with, from the Basque Health Service, Osakidetza, everyone was urged to take vacations in the summer, anticipating a regrowth in autumn, “advising that they could not guarantee vacations if there was one, nor pay them, in any case postpone them to 2021 “. Therefore, people who preferred to fuck them later have taken them, and many patients have not gone on vacation. In addition, the losses of doctors due to COVID and other reasons and “we have a workload from April or May in August, with fewer people than a normal August.”

There, too, phone calls accumulate: “It has been done to optimize and it is done in shifts, but now to the 40 patients of each doctor you add the consultations by phone and at the same time they attend the day that it is 70. It’s great for the administration, it was Osakidetza’s decision, but the population wants them to see it in person, so they often get angry with the doctors. ”

To all this is added that “the tracking personnel do not give us support as they say, but on the contrary: they, almost all nurses, do a phenomenal job for which, with whom they are, they cannot cope; so when it tests positive a patient is often from Primary Care where tracking is supported “. And, with the situation, Arciniega points out, “more and more young people come to you without smell, with diarrhea. And that’s what they have to do, some will be COVID-19 and others will not be, and you have to see everyone. Everything adds up and goes on, more work and more work “in those circumstances. “You have to be careful, call, there are advice phones … it’s great,” she said. What is irresponsible is “that small group of people who, for example, should be isolated and you call them and they are not.”

“It’s the perfect storm,” sums up Casado, a family doctor in Madrid. A combo of increased cases, responsibility and fears combined with a structurally weak situation in Primary Care that the pandemic has finished undermining. And back from vacation and winter on the horizon. The health workers, at this juncture, are asking once more for resources. “The administration looks at the hospitals, but forgets the health centers. Here those of us who are we are off-road and the day they realize it, value it and equip us as we need … that day we may have already tired”, ditch Nurse Fernández.