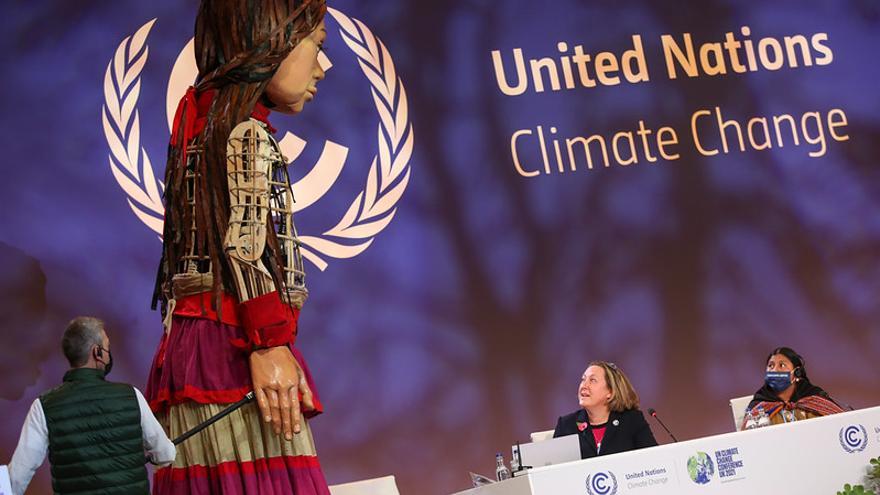 An urgency has arisen at the Glasgow climate summit: try to prevent cheating when countries report how they are doing, how much CO2 they emit or what their real actions are beyond plans on paper. The official agenda calls it transparency, but it is about measuring with common accounts if the states comply, to know what the real situation of the planet is. In short, do not cheat the loner.

In the middle of COP26 a investigation of Washington Post which says that in the 196 emissions reports of the countries there is a gap, downward, of between 8,500 and 13,000 million tons of CO2. A graphic example: Malaysia reports that its forests absorb carbon four times faster than neighboring Indonesian forests. It does not add up.

Negotiators in Glasgow have insisted that the way to cut all this creative climate accounting is to “delve into the transparency” that marks the Paris Agreement and is played out here. “It is not enough to say a few simple objectives but what are you going to do for it? Offer a calendar and some actions,” say sources within the conversations. “A much more detailed report.”

At the moment, what has transpired from the rooms where the delegations’ faces are seen is that it is necessary to “increase support so that the requirements when reporting are improved.” In this sense, a calendar and unique tools should come from here, but the draft is full of alternative texts. And even, “there are parties that would like to reopen the rules,” say the diplomats. That would imply a setback, everyone admits.

Leave Glasgow with the 1.5ºC target within reach. This phrase has become almost a motto in the Scottish city. But how does that wish come true? “To measure it, you have to look at this transparency because, in this way, you can avoid greenwashing of the countries, “explains Equo-Verdes co-spokesperson, Floren Marcellesi, who attends this COP.” Australia is exemplifying this facelift: it has announced that it will have net zero emissions in 2050 but how will it do it? It is not known. And how will it get to 2030? Either. That’s what fights transparency. “The difference between ad cascade and live action.

The same UN Secretary General, Antonio Guterres, announced a few days ago that he is going to create a group of experts under his authority to check whether the companies’ climate announcements are real or another exercise of greenwashing. Put the focus on them. “That is raising blisters,” they admit from within the conversations.

Because what seems to be a consensus is that a reliable accounting mechanism is crucial to know where you are. Right now, what’s out there is an assessment of national plans that say CO2 emissions will go up until 2030 instead of down. What the most demanding countries ask for is that it be specified how often it is necessary to give an account of how it is being fulfilled.

The summary is that the countries are in the Scottish city before a test on the trust they generate. And, as some negotiating teams illustrate: “Are you convincing and credible when you say you will do this, this and this?” It seems that the phrase repeated by activist Greta Thunberg about the “blah blah blah summit” has found its way into the conference center.

“Everything seems to be still very much up in the air,” say observers from non-governmental groups. The president of COP26, Alok Sharma, has insisted in the working sessions on Tuesday that his plan is “to finish on Friday afternoon.” The drafts that can be evaluated are full of alternatives.

So much so that it is not known what will happen to, for example, the famous carbon markets that have been crawling since 2015. These markets do have the potential to trick the accounts directly: a country counts the CO2 that they retain, for example, their forests and also takes advantage of the carbon that trees have retained for years to generate credits to sell. Then, the buyer countries, which have not reduced CO2 in a real way, buy them and also deduct gases from their accounts.

“There are technical debates that in the end are important”, justify the sources that are in the day to day. Of course, the European Union maintains a very strong position on this matter, which has already caused the previous summit, the COP25 in Madrid, to beat its duration record.

And then there is the money. The around 20,000 million dollars that are missing to complete the 100,000 million fund committed by developed countries to support impoverished states have not yet appeared, they admit at the working tables.

With this outlook, and moving forward in the second week of COP, almost nothing is yet known about China and India (first and fourth countries in the ranking of total CO2 emitters).