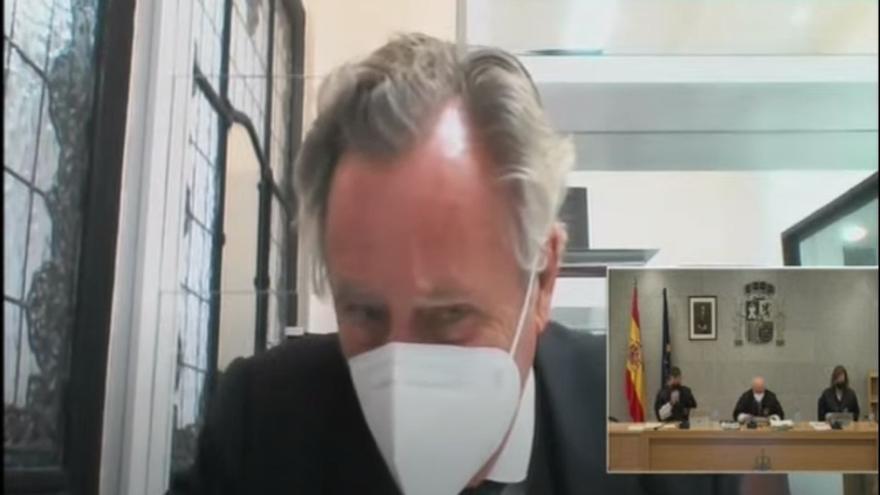 The businessman Ignacio López del Hierro, husband of María Dolores de Cospedal, has denied being the “López H” and the “López Hierro” that appears in the ‘Bárcenas papers’ as a donor of 19 million pesetas of black money to the cash register B of the Popular Party. “Lopez H. could be López Hernández and López Hierro could be another person,” said the witness to questions from the popular accusation of Adade.

López del Hierro, who appears in a recording meeting with Commissioner Villarejo y Cospedal, in the office that the latter had as general secretary of the PP in 2009, has assured in the trial that he has never gone to Genoa in his “professional performance”, according to the term used by the lawyer who interrogated him, Mariano Benítez de Lugo. López del Hierro has declared by videoconference and has appeared covered by a mask.

The businessman has denied that he took legal action for the publication of the ‘Bárcenas papers’ or the connection that these annotations were made with him. “I am not one of those two people listed there, first of all, I have not made any legal action because I was not even called to testify by the magistrate who is handling this matter at the time. I didn’t give it a lot of credibility. I never thought it was me ”, he declared.

Observatori Desc’s lawyer, Gonzalo Boye, has asked him about Álvaro Pérez, El Bigotes, convicted in Gürtel. López del Hierro has said that he does not even know who that person is and that he does not remember announcing a complaint against him. López del Hierro, however, announced through a public statement on February 20, 2018, three years ago, that he would sue El Bigotes for linking him to the irregular financing of the PP in his appearance before the investigation commission of Congress.

Although he does not know who Álvaro Pérez is, López del Hierro accused him of trafficking drugs in the recordings of Commissioner Villarejo. “He is a qualified trafficker,” said the businessman who testified today as a witness, with the obligation to tell the truth. López del Hierro and his wife, María Dolores de Cospedal, have pending Judge Manuel García-Castellón to decide on the imputation request in the piece that investigates the Kitchen Operation that Anticorruption carried out in September 2020.

Before López del Hierro, Luis Gálvez, former head of the Ploder company, has declared that he appears as a donor of 50,000 euros to box B of the PP. Gálvez has denied knowing Luis Bárcenas or Álvaro Lapuerta, the recipients of the black money, and has refused to answer several questions alleging that he has been charged in the piece of irregular financing of the PP in Madrid, within the Púnica case, and the case file against him is not yet final. Gálvez is the businessman who, according to Bárcenas, would have delivered an envelope with 60,000 euros that Esperanza Aguirre received for a campaign. He denied it before the Punica judge and García-Castellón has filed the complaint.