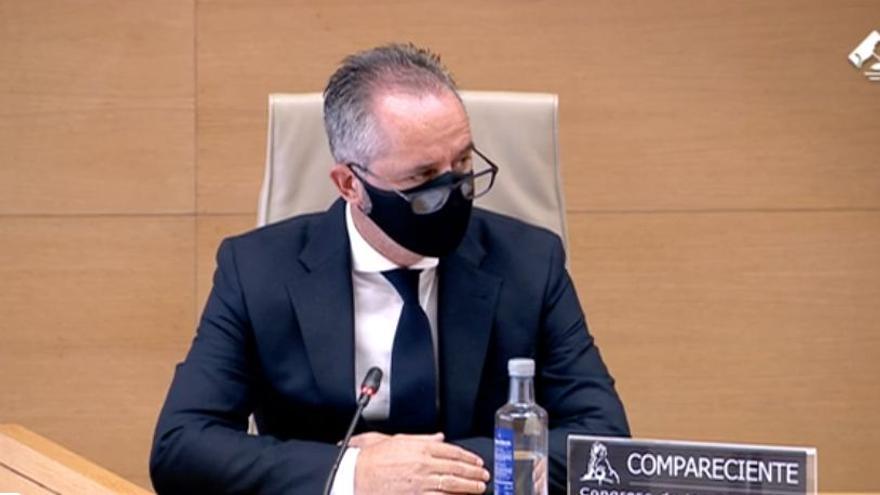 Commissioner Andrés Gómez Gordo, accused in the National High Court for illegal spying on Luis Bárcenas, has refused to answer any questions asked this morning by the groups in the Congressional investigation commission. Citing the advice of his lawyer and his legal situation, Gómez Gordo has not even responded about his different destinations or pensioned medals.

Hesitantly, the police command has asked “a thousand apologies” over and over again, an attitude that has changed as soon as the appearance is over, at which time it has got up and with a firm step has approached, one by one, all the spokesmen to bump their fists with them and give them a touch on the arm as a farewell with alleged complicity. Gómez Gordo has presented himself with a mask that reached down to his eyelashes.

Commissioner Gómez Gordo is the policeman who left his position as a ‘man for everything’ in Castilla-La Mancha with the then president María Dolores de Cospedal to return to the Police in 2013 because he was going to control an acquaintance of his that the political brigade had Infiltrated in the surroundings of Bárcenas, the driver Sergio Ríos, whom he paid with money from reserved funds. At six months, with Jorge Fernández Díaz as Minister of the Interior, he received a red pensioned medal.

Gomez Gordo, who also made money with the PP in the Government as an advisor to Francisco Granados, received a salary of more than 100,000 euros per year as head of security for the City of Justice that never worked. In the case that investigates the pharaonic project that failed in Aguirre’s time, Gómez Gordo is on his way to the bench.

Several parliamentary groups, such as Podemos or EH Bildu, have congratulated him on the victory of the Popular Party, the formation in the heat of which Gómez Gordo has received significant amounts of money during his periods of leave from the Police. Commissioner García Castaño has linked Gómez Gordo with the making of the report on the false illegal financing of Podemos that the courts despised.

Commissioner Gómez Gordo is today head of the Villa de Vallecas police station, a position to which he agreed with the current Government when he was promoted. His lawyer belongs to the office of the former judge of the National Court José Antonio Choclán, one of the most prestigious and expensive lawyers in the capital. The Vox spokeswoman, Macarena Olona, ​​has addressed this question: “Who pays the fee for his lawyer? But Andrés Manuel Gómez Gordo did not answer either.” Only on one occasion did he tell the ERC spokesperson that “the less doubt “that he had always acted in good faith.