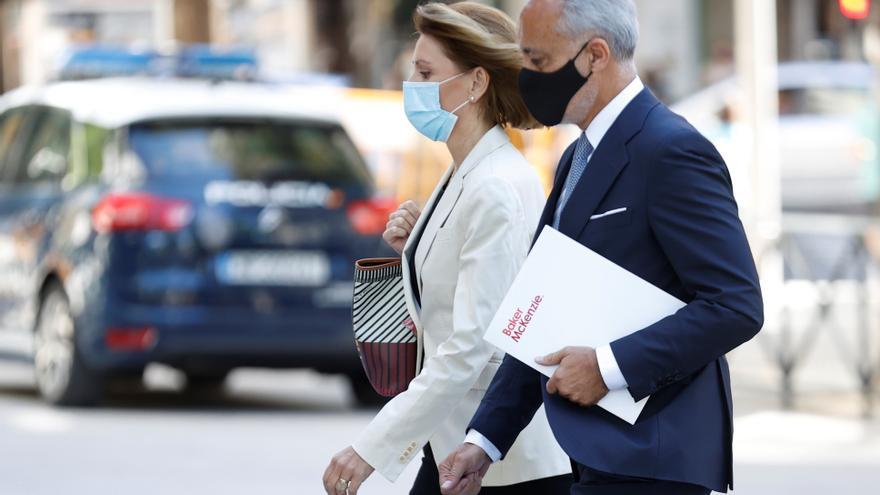 The former secretary general of the PP María Dolores de Cospedal has asked the National Court to endorse the decision of Judge Manuel García-Castellón to end the investigation on Operation Kitchen and to leave her and her husband, the businessman Ignacio López del Hierro, out of the case, arguing that the investigations around the alleged political plot are “exhausted” without “solid evidence”, which would lead to the conclusion that only it was a “police operation”.

In a letter, to which Europa Press has had access, Cospedal has opposed the appeals filed by the Anti-Corruption Prosecutor’s Office, the PSOE and Podemos, which seek that the Criminal Chamber of the National Court revoke the order issued in the past July 29 by the head of the Central Court of Instruction Number 6 that ended the investigation on this separate piece 7 of the Tandem macrocause.

Cospedal demands that the Chamber confirm García-Castellón’s decision to archive the matter for her and her husband, who came to be charged because the judge suspected that they may have had a “decisive” participation in the recruitment of the Bárcenas driver , Sergio Ríos, as a spy for the parapolice operation with which they would have watched the family between 2013 and 2015 to steal any compromising documentation they might have on the PP and its leaders.

For its part, the Prosecutor’s Office believes that the magistrate should continue investigating the so-called “political connection”, which would have provided the necessary coverage so that the Ministry of the Interior and the police leadership could launch Operation Kitchen. In this political umbrella, Anticorrupción included Cospedal and also pointed to the former Prime Minister Mariano Rajoy.

However, Cospedal’s lawyer maintains that the investigation into his client, López del Hierro and “the alleged ‘political connection’ of the alleged police operation” is “exhausted”, bearing in mind that the marriage’s participation in the espionage of Bárcenas is “non-existent”. And this because he understands that, from the proceedings carried out in these years of investigation, no “solid evidence” has been extracted against the couple. In this sense, he emphasizes that the only elements that could point to Cospedal and López del Hierro are those contributed by the retired commissioner José Manuel Villarejo, who he describes as “mere suspicions.”

Thus, he responds to the anti-corruption prosecutors, who accused García-Castellón of drawing a “red line” in order not to advance towards the political plot, that “it is not that the court ‘does not want’ to continue with the investigation on the alleged ‘political patronage ‘of the alleged police operation, is that it should not do so, as there are no compelling legal reasons for it. ”

The word of Villarejo

Consequently, the former general secretary of the PP considers inadmissible the request of the Public Prosecutor’s Office to continue investigating the five telephone numbers that Villarejo provided, ensuring that through them he kept Rajoy up to date with Kitchen. In his letter, Cospedal emphasizes that “there are no communications” between the telephones that the commissioner would have used and the one that would belong to Rajoy, reasoning that the fact that this last telephone line belongs to the PP, or that it was even really that of the former president , does not show “at all” that the two communicated.

The former head of the ‘popular’ wields that neither at this point, nor in her judicial statements, in the conversations she recorded and in the notes of her personal agendas, can Villarejo’s word be given credibility. “It is known that the incriminating statement of a defendant – in this case, Mr. Villarejo – by itself cannot constitute sufficient evidence to enervate the presumption of innocence”, but must be corroborated by “objective data”, he emphasizes, adding which is not the case.

On the other hand, Cospedal agrees with the judge in defining Kitchen as a “police operation”, that is, restricted to the scope of Jorge Fernández Díaz’s Ministry of the Interior, of which he assures that he had no knowledge whatsoever. Regarding his alleged intervention to sign Ríos, he indicates that it was the driver who “on his own initiative” went to Andrés Gómez Gordo -ex Cospedal security chief-, whom he knew from an earlier stage, after someone from the Police contacted with the. From there, he says, the commissioners communicated with each other. “What need was there for López de Hierro or Cospedal to be involved? It doesn’t make any sense,” the letter states.

As for the marriage relationship with Villarejo, the letter speaks of simple “social” contacts. The first to meet him, he says, was López del Hierro in the 90s, although they resumed the relationship in 2000 after a chance meeting. “From that moment, a relationship began to meet from time to time to have a coffee and catch up (…). They talked about politics, anecdotes from the police and judicial world,” he explains.

Villarejo, he continues, asked López del Hierro to meet with Cospedal in 2009 because he had “interesting information about certain people in the political party.” She accepted because at that time she was “worried” about whether the then socialist government was recording the PP in Genoa and about the leaks to the press on judicial issues that affected the PP. Later they met 3 or 4 more times but only spoke of “political and judicial news”, he asserts.

In this way, Cospedal denies that these meetings were intended for Villarejo to give him information about Gürtel’s judicial investigations, while stating “what need could the Popular Party have to sponsor or devise an alleged police operation (Kitchen) with the aim of of stealing an alleged documentation from Mr. Bárcenas, when said documentation was at the headquarters of the party itself for years. ”