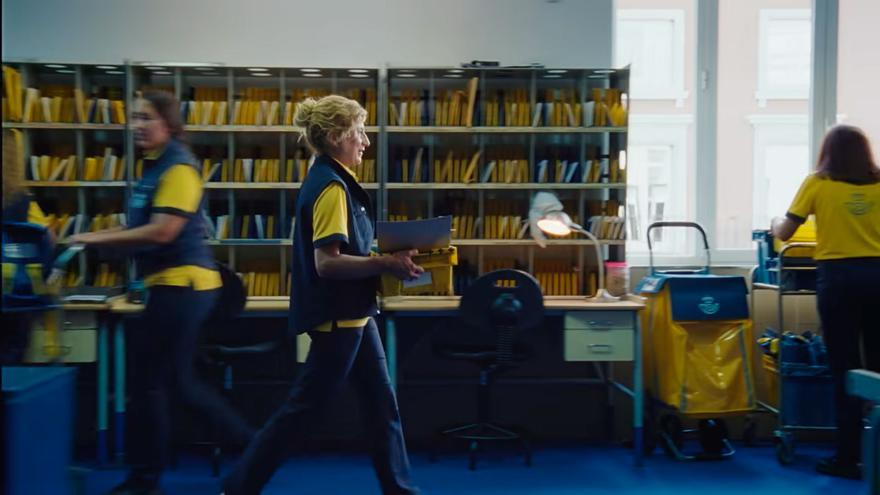 Correos has starred in recent months in a constant trickle of agreements with large private companies to convert their offices into points of sale for their products. Thus, in more and more branches of the public company you can take out insurance, withdraw or deposit money in your account or manage an electricity and gas account. All this, without the postal company having activity in any of these sectors, beyond these alliances with which it seeks a new income route with which to complement a traditional business that has been declining for years.

Although it is a process that comes even before the pandemic, it has accelerated in the last year. The most popular alliance it was that of Banco Santander. Correos offers since the beginning of 2021 in its offices the possibility of withdrawing and depositing money to Santander customers, a service especially focused on the smallest towns and less populated regions, replacing the disappearance of bank branches in these areas since the last crisis financial The bank itself reported that thanks to Correos it would be present in 1,500 locations where its network is not available.

It was subsequently followed by a similar agreement with Mapfre. The alliance began in some 500 offices of the public postal operator, where the catalog of insurance services for automobiles, home, health and companies could be accessed. In this case, although the hiring began in the Post Office, it was completed with the insurance company, with the state company operating as an intermediary. It should be contextualized that this agreement was known when Mapfre had already assumed that it was losing an important avenue for the commercialization of its products, which was Bankia. The absorption of CaixaBank made it necessary to break the alliance between the insurer and the rescued entity.

In this same sector, a new agreement has been signed in recent days. In this case with Caser. As in the case of Mapfre, with 500 initial offices, Correos will be able to offer the company’s insurance catalog, although it will be the insurer that formalizes these contracts. “This new agreement means advancing our diversification strategy,” stated Manuel Zapatero, director of products and services at Correos when this alliance was announced

Since 2019, Correos reported its intention to convert its offices into points of sale for financial services such as banking and insurance and already had agreements with other smaller entities such as EVO, now in the hands of Bankinter, or Mediolanum. The next step that the public company will take in the financial sector will be the installation of ATMs in its offices. The company announced a month ago that it intends to install 1,500 ATMs from next year in its branches, 300 of them in locations without a bank branch. In exchange, the public company would receive a “fixed income” for the rental of these spaces for ATMs in its premises, to which a percentage of each operation carried out in them was added. According to the company, the objective is “to fight against financial exclusion in rural areas.” However, the CCOO and UGT unions questioned this approach by ensuring that since the current address arrived at Correos, 240 rural service points have been closed. They pointed out that it is “self-promotion and advertising marketing.”

Correos has chosen to be an intermediary for third-party financial products as a way to expand services in its offices. In other countries, the public postal company has become a banking operator. This is the French case, for example, where La Banque Postale is one of the largest entities in the country, somewhat larger than Sabadell in Spain, for comparison. The government recently merged this group with the CNP insurer to create “a great public financial hub.” In France, a fifth of the income of La Poste, the counterpart company to Correos, comes from banking activity, as well as 65% of the operating profit (profit before taxes, depreciation and other accounting adjustments).

Something similar occurs in Japan, where one of the four largest entities in the country is the Japan Post Bank, which is owned by Japan Post Holdings, the country’s postal company which, although it is listed on the Stock Exchange, is still under public control. The bank offers all its services through post offices in Japan and has assets of 1.6 trillion euros, a figure similar to Banco Santander, the largest Spanish entity.

But not only financial services are experiencing this diversification of its activity that Correos points out that it seeks with this strategy. Other movements are being made in the energy sector. One of the last agreements announced by the public company has been with the oil company Repsol. In more than a thousand offices of the postal operator, customers will be able to request electricity and gas services from the energy company, although it will be the one that formalizes and manages the contracts. At the moment it is being implemented in Barcelona, ​​Madrid and Valencia, and later it will be extended to other provinces. The company had previously signed agreements with other large electricity companies in the country, such as Endesa or Naturgy, alliances that have been running for some time.

The third sector in which the company has offered its offices for third companies is telephony. A customer can hire fiber and mobile services from O2, Telefónica’s low-cost subsidiary, at the post offices. In the past, it also had an agreement with Pepephone, a brand of the MásMóvil group. In addition, in this case, yes, the public company has a project operated by herself, Correos Telecom. This company, which has a range of services comparable to those considered low-cost in Spain, is currently available only to group workers. Asked about the future of this initiative, Correos avoids confirming whether the plan is to offer it beyond the postal operator’s staff.

The public group does not specify how much income the sale of these products in its offices means or its objective with respect to the total billing. They only slide that these agreements, with their differences between them, usually include clauses by which Correos charges a series of commissions or percentages of the operations that originate in its offices. The only data that Correos publicly advances is that 200,000 clients have been referred to energy companies and about 100,000 to the insurer. In addition, the company points out that certain procedures can also be carried out with the administration such as the one known as the Virtual Entities Registry Office (ORVE), which has processed 600,000 actions, or with the General Directorate of Traffic (DGT).

Beyond the scant details on the business impact of these agreements or the expected return, the company has repeatedly explained that with this strategy it seeks to “diversify and enrich the offer available in its network of offices, the largest in Spain in regarding capillarity and territorial coverage “. It is, they point out, “incorporating new products and services whose demand continues to grow.” They recognize that, given the fall of the traditional postal business, other avenues of income and activity are being sought for the company.

The company already pointed out in its 2020 annual accounts that the objective was to undertake “a diversification process that allows it to enter growing markets with higher margins.” Correos had losses in 2020 of 264 million euros compared to 13 million in profit the previous year, mainly due to the pandemic. In the first half of the year, the company was already making a profit of 1.8 million again. The 2021 General Budgets set expected losses for the company of 77 million euros and, for next year, the draft accounts agreed by the coalition government foresees red numbers of 29 million euros.