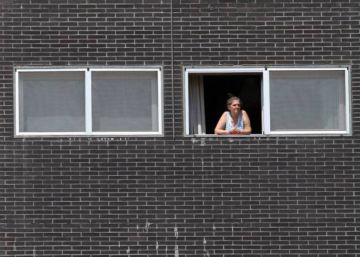 The uncertainty that both banks and their users suffer from the coronavirus crisis and that had put wings on fixed mortgages it was moderated in June. When breaking a streak of three consecutive months in which most of the mortgage loans that were signed to acquire a home had a fixed interest rate, in the sixth month of the year the proportions were reversed and 50.4% of which asked for a loan opted for the variable rate, against 49.6% who, on the contrary, signed a fixed mortgage, according to the data published this Friday by the INE. In this way, it seems that, in the month in which the state of alarm was raised, the banks ‘commitment to fixed interest rates and consumers’ fear of a hypothetical future rebound in the Euribor – the index to which variable interest rates on mortgages are mostly linked – lost weight, two of the main factors evoked by experts to explain the propensity towards the flat rate manifested by consumers in the peak months of the pandemic.

The trend that was interrupted in June came from afar, but the health emergency derived from the Covid-19 pandemic marked the turning point. If in January 2016, fixed mortgages represented only 10.1% of the total, a year later they already reached 34.7%. Although they were above 40% almost uninterruptedly since February of last year (the exceptions were September 2019, with 38.3%, and February 2020, with 37.4%), they were never the majority until last March . The first month of the state of alarm, which came into effect on March 14 and was renewed until June 21, fixed-rate mortgage loans reached 53%. In April and May this proportion was 51.6% and 52.8%, respectively.

“That the fixed could exceed the variables was something predictable”, admits Simone Colombelli, director of Mortgages of the bank buyer iAhorro, “but we thought that that moment would have taken longer to arrive.” The last push came from the hand of the Euribor. The index to which most variable mortgages in Spain refer, which has moved in negative territory for more than four years, had risen positions in the harshest months of the first wave of the pandemic and had approached zero, before going back to trading in an environment close to its historical low in July, when it closed at -0.279%. This rise made variable mortgages that were signed between March and May somewhat less attractive.

It is true that subsequently the Euribor has fallen again with force. Even so, the director of the Tusolucionhipotecaria intermediary, Ricardo Gulias, does not believe that variable mortgages can gain much ground over fixed mortgages. In his words, in an environment of very low interest rates, “the banks want to ensure the profitability guaranteed by the fixed rate.” Hence, entities bet on it through marketing campaigns and very tempting interest rates that make a dent among users scared by uncertainty or directly hit by the economic crisis. “The consumer wants security”, summarizes Gulias, highlighting that the inquiries that his company receives in recent weeks are mainly directed at fixed ones.

Along the same lines, Colombelli foresees that, sooner or later, “the Euribor will rise again, but since we cannot predict when, the conservative nature of some entities leads them to bet on fixed loans.” In any case, the crisis has affected all interest rates, although to a greater extent fixed rates. If in January this year the average of fixed rates was 3.05%, in June they closed at 2.88%, which represents a decrease of 1.7 tenths of a point. In the case of variable mortgages, their rates have gone from an average of 2.22% in January to 2.14% in June, a decrease of 0.8 tenths of a point, always according to the INE. In the opinion of Gulias, these decreases “are due to the greater competition of the entities in the search and acquisition of customers.”

When analyzing the data by banks, iAhorro highlights that the movements between January and July have been uneven. During these months, the entities have opted for different strategies regarding the commercial offers of their mortgages. Ibercaja and Abanca, for example, lowered the APR (equivalent annual rate; it includes not only the nominal interest rate but also other expenses and mortgage costs) to 1% during the state of alarm. On the contrary, Bankia and Sabadell raised it. Other banks, such as BBVA, Openbank, Caixabank, Bankinter or Santander, have kept it more or less stable and some of them have waited for the arrival of summer to modify their offers.

The dominant trend this season has been uncertainty. “Many signatures were delayed in March and, with the ERTEMany banks were more reluctant to grant loans, to such an extent that, in some cases, the granting of the loan was conditioned on the worker leaving the file ”, Colombelli emphasizes. Which, in any case, did not prevent banks from negotiating 30-year fixed rates close to 1%, as long as the client had subscribed products linked to the mortgage, Gulias indicates. Or variables with a differential of 0.69% plus Euribor. “The margin to lower more is already beginning to be limited,” warns this expert.