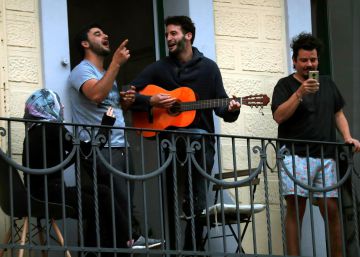 Mandatory confinement due to the coronavirus crisis is raising a multitude of legal questions within neighboring communities. The experts have been receiving inquiries of all kinds for several days, from whether the meetings should continue to meet to whether the common spaces within the urbanization can be used during the quarantine, to whether the custodian should continue to come to work or not. Likewise, the state of alarm has forced coexistence among the residents of these buildings, who wonder what solutions the law offers against those neighbors who are too noisy or annoying.

Since the state of alarm began, many neighbors have taken advantage of the rooftops, garages, gardens or other common areas of the building where they live as escape routes to play sports, walk or simply hang out outside the house and clear the mind of the confinement. But is this lawful conduct? Could a tenant be fined for using these spaces during quarantine?

The royal decrees approved by the Government so far prohibit the movement of people on public roads, as well as through “spaces for public use”. Although the regulations do not expressly mention the common areas of private buildings (such as gyms, roofs or gardens), the truth is that, as Mariluz Rodríguez, a lawyer from the Legálitas real estate department, points out, these places would also be banned. “After all, the essence of these rules is to limit the exposure of people to avoid the spread of the virus,” he recalls.

Neighbors who occupy these spaces without just cause can be fined. The urbanizations and buildings are private enclosures “so that the powers of the police are limited,” says Rodríguez. However, the decree approved on March 18 expanded the powers of the competent authorities, allowing them to suspend any activity that, in their opinion, may pose a risk of contagion. This means that the police cannot patrol a building or urbanization to monitor that traffic restrictions are respected, but could access it if they are aware that there is a clear situation of exposure to the virus (a barbecue or several neighbors playing in a park interior, for example). In these situations, the authority could order the end of the activity and fine the participants.

On the contrary, the law is more flexible when it understands that there is an urgent or serious situation. In this sense, the lawyer points out that what must prevail is common sense and logic. Thus, a person who wants to use the garage for sports would not have as much legitimacy as, for example, a family with children who have been locked up for several days “and who are already starting to climb the walls.” In these situations, the neighbors could make use of the common spaces, but with the appropriate protection measures, during the necessary and just time “and preferably when there is nobody”, Rodríguez clarifies. In case there are more people, the safety distance should be respected.

What if I have a neighbor who is too loud or annoying? The horizontal property law, in its article 7, prohibits the occupants of the flats or premises from carrying out activities prohibited in the statutes “or that are harmful, annoying, unhealthy, harmful, dangerous or illegal.” Any of the affected neighbors, therefore, could call the police or, where appropriate, urge the president of the community to demand the cessation of these actions. Should the annoying dweller continue to inconvenience the rest, the administrator may even initiate legal action against him.

Now what is an annoying and harmful activity? “There are people who have a very low threshold of patience and any minimal noise displeases them,” says Rodríguez. Although there is no clear definition of what actions can and cannot be allowed, counsel warns that, given the situation of confinement we are facing, the police will most likely not handle the claims unless they are really serious. . “It’s about being empathetic and being patient,” he summarizes.

The same conclusion was reached by the Provincial Court of Madrid at the end of last year when it rejected the demand of a married couple who complained about the noise made by their upstairs neighbors, a family with three children. In the judgment, the magistrates reject that the sound caused by the minors (running, hitting, hitting, repeatedly throwing objects on the ground, dragging furniture or objects, playing with skates, skateboards or yelling) was of such intensity that it prevented the development of normal life, as the plaintiffs alleged, and recall that it only occurred in hours outside those considered as rest. Likewise, the Chamber recalls that the lower level of noise tolerance of certain people “cannot serve as a criterion to impose on the rest of the residents of a property”, all of them must live with the tolerance and respect that the rules of coexistence and good education advise.

Goalkeeping, cleaning and other services

The order to halt all non-essential activity has raised questions about whether gatekeepers, gardeners or other figures should continue to provide services in the buildings. In this regard, the Professional College of Property Administrators of Madrid (CAF Madrid) clarified on March 30 that these professions are included among the essential ones, which is why “porters, janitors, cleaners and gardeners who provide their services in communities of Owners, either for their own account or for others, must go to their jobs normally in the next 15 days. ” However, they clarify that the functions they must perform are essential to enforce the general principle of habitability and security of the building, “in order to guarantee the confinement of the population in their homes.”

In this sense, and in the event of a breakdown both in the common areas of the building and in private houses, Rodríguez points out that the repair activity is suspended unless it is an urgent case. Thus, the deteriorations that cause, for example, a leakage of water, gas or the power outage, could be addressed, “while, if it is not essential, the arrangement by specialists would have to wait” .

Can you continue to hold neighborhood meetings? At the beginning of March, the College of Property Administrators of Madrid released a statement advising to suspend the meetings in the communities of owners, except for urgent matters. For their part, the measures approved by the Government in the field of mobility prohibit these meetings and indicate that, if necessary, they may be held in a on-line or through other remote means such as telephone, e-mail, videoconference, etc.