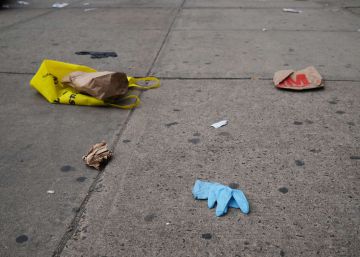 The only person I’ve touched for a week is my two-year-old daughter. Every selfie What I do of the two of us is a photograph of me trying to inhale it. The streets are empty, the ambulance sirens are constant, the brightness of the sun is insulting. Beyond our windows, the city is running out of respirators. The stores have posters in their windows that look like they were taken from the apocalyptic movies that I loved when I thought they were metaphors, not prophecies: “Due to the COVID-19 epidemic, we are closed indefinitely” My daughter and I have not been out of the apartment for four days, since I started having symptoms.

Lie. I went out once, to take down the trash. I couldn’t smell it, because I can’t smell anything — the smell suddenly disappeared, as did the taste; It’s the new symptom that the news has been talking about lately — but seeing that I couldn’t squeeze the pile of banana peels and pieces of mashed zucchini in the bucket anymore, I realized there was no other choice. In the lobby of the building I saw a man with a blue mask who had come to pick up someone’s clothes to take to the laundry. When he took off his mask to speak, I turned away from him. I’m sure he thought he did it for fear of getting it, when, in fact, I did it for fear of getting it myself. I was afraid to speak. I imagined the virus transmitting itself in particles from my saliva. But it was not my imagination. It was reality. Why was I not able to tell him “I have the virus”? The words caught in my throat. I was ashamed to be a transmitter.

The virus. A strong and intimate name. How does my body feel today? With chills despite the blankets. With a horrible itch in the eyes. Three sweaters in the middle of the day. My daughter trying to put me another blanket with her little arms. A pain in the muscles that, for some reason, makes it very difficult for me to stay still. Loss of taste is a kind of sensory quarantine. It is as if the quarantine is approaching, inch by inch, the deepest part of my being. First I lost contact with other bodies; then I lost air; Now I have lost the taste of bananas. None of these losses is especially rare. I have made a calendar to not go crazy with the girl. Five days ago I wrote about it “Walk / Adventure!”, Along with a cut out illustration of a tiger; as if we were going to see tigers on our walks. I thought it was nice to keep the possibility alive.

Clear. Today. In this condemned world. Do something nice to her. I have thought about including in our calendar many possible games that are stimulating, but they are more difficult to imagine with the virus in my blood: a snack, a dance, a party to make strips of tissue paper. I can still think about watching the live stream from the zoo, but it’s not always worth it. Sometimes he’s just a koala with his eyes closed and looking sick, like the rest of us. In any case, it does not matter what is included in the agenda. My daughter is clear about what she wants. His favorite game is to jump head first from the pile of clothes to the ground. Her second favorite game is to throw my bras in the trash. His third favorite game is smashing the diaper rash pomade tube onto the floor and then giving me one of his wipes and saying, “Wipe it.” When I stare at her, she smiles coquettishly: “Wipe it, please” It knows all the tricks.

The only way I can write all this is to sit with her on the floor and give her a pen and a notebook so she can scribble next to me.

I wake up in the middle of the night with my heart beating very hard and my sheets are soaked with sweat, surely full of viruses. The virus is my new partner, the third inhabitant of the apartment, lying and wet on my body all night. When I get up to drink water, I have to sit on the floor halfway so I don’t pass out.

One afternoon, from the window, I see four high school students walking arm in arm. There is something insolent about his joviality, his natural way of touching himself, a “What can’t we touch? Let them give you! ” I want to shout at them: “You can’t!” The desire to feel superior to people who do not fulfill social distancing is our way of facing our fear and justifying our sacrifices. “If I’ve had to give this up, you should too.” I have not touched another adult for nine days, although it is not that I keep score. The day I realized I was sick, I put up a sign on the doorway warning my neighbors that I was infected. The fault of the transmitter keeps me awake still. Anyone who is sick is someone else’s zero patient. It is what they call “virus excretion”, a beautiful and grotesque expression at the same time, as if, under ultraviolet light, the disease was a kind of snake skin detached and curling all over the floor to dust.

“The virus is my new partner, the third inhabitant of the apartment, lying and wet on my body all night”

Lately I usually dream of nice dinners to which no one has invited me. Idealizing other people’s quarantines is just the latest version of an old habit. What difference does it make that I signed my divorce papers a month before the city began confinement? I have my blankets. I have my little girl who puts pieces of pita bread around the neck of her pajamas with rainbow flames, in the epicenter of the epidemic. Of course, sometimes I would like my quarantine to be different, and sometimes I wish my marriage had been different, but when have I lived without this uneasiness? It is a pain in the muscles that makes it difficult for me to stay still. Quarantine teaches me what I have already been taught but I will never learn: that there are many other ways of being alone, in addition to my specific way of being alone.

We spend the days pricking raspberries bought online with the children’s fork. “Mother, Help me“He says sometimes, with a plaintive tone. You need something but don’t know exactly what. I do know exactly what I need: another human body. So I breathe in and absorb his scalp over and over again. I let him squeeze my thigh with his toes over and over. “Mother, legShe says, delighted. Sometimes it is enough to name the world, to list its parts. I remember sex before quarantine: the opposite of estrangement, the opposite of disease, the opposite of containment. I remember the cars overflowing in the supermarket in the days when the rumors of confinement were still rumors: the woman who hoarded cat food and instant coffee, the man with his arms full of soap, as if he was going to do nothing more than to wash until the end of time.

I remember the last time I felt so removed from the world; Also the last time I ate without savoring: at 17, when I returned home after a week in hospital, with my jaw full of wires and my face swollen and recognizable, a terrible operation to heal the fracture suffered in an accident while hiking. I asked my mother to cover all the mirrors with sheets because she couldn’t bear to see me. I injected a protein drink directly into the back of my mouth with a small syringe and used a notebook to communicate, because I was unable to speak for months. And what did he write? Years later, I rushed through the written notes for any depth into the feverish dream of my pain, but all I found was fear and need, looped up: “What if I vomit with my mouth sewn up? More Vicodin, please. More Vicodin, please. More Vicodin, please.

There is no Vicodin in this house. Only infantile paracetamol and bananas that are porridge on my tongue and another alcoholic rehabilitated on FaceTime that tells me that some of the people she is godmother have returned to drink because “this shit of the world is running out”, at least for now, and now the rain falls on the empty streets, and I put my hand out the window; just a moment, just as I press my cheek against my daughter’s belly, to feel something that is still there.

Leslie Jamison She is an American writer, author of the novel The Gin Closet (Sixth Floor) and rehearsals The hook of time (Anagram) and The footprint of the days, which will be published in September.

Las Palmas de Gran Canaria, among the 25 coolest film festivals in the world