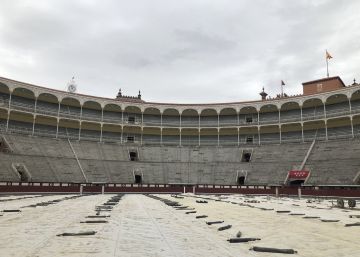 Among the various enemies of the bullfighting festival, what did not appear in the manual is that an antitaurine with bad grapes arrived from the distant lands of the east; a virus that has created disease, death and panic throughout the world, and, in one of his spare moments, has jumped into the bullrings, has outlined himself next to the tables, has mounted the sword with complacent sufficiency, the crutch forward as if he were a complete bullfighter, and he has taken a thrust to the hilt on the cross itself of a spectacle that he was walking, it is true, with serious symptoms of a disease that by itself threatened his fragile existence.

The coronavirus has presented itself without asking at the worst time for bullfighting, - plagued by internal evils and countless external attacks - and its first ravages are unfortunate for the economy of those who live on the bull, for the feelings of those who feel bullfighters and They dream of glory, and for so many fans who have waited, pregnant with illusion, that the gang door would open and that colorful and paradoxical show would begin, disappointing many afternoons, and exciting and extremely exciting others, such as a bullfight. Bulls.

The Fallas and La Magdalena fairs have been paralyzed, and authorities and managers are racking their brains in the difficult search for new dates, knowing that no one can assure that they exist on the calendar. And if they are found, it seems that the cycle fallero will be held in July, nothing will be the same.

The Community of Madrid announced yesterday that the start of the bullfighting season in Las Ventas was suspended, so the two heifers announced for Sundays on March 22 and 29 will no longer be held. (Who will restore the illusion to those kids?) And it is practically certain that there will be no gala presentation of the San Isidro Fair on the 25th at the Capitol cinema on Madrid's Gran Vía.

There will also be no strollers at the fair in the French town of Arles, where Alejandro Talavante was scheduled to reappear on April 11. Neither in the bullfight scheduled in Arnedo on the day of San José, nor in the festival announced in Murcia on March 29.

The Fallas and La Magdalena fairs halted and the start in Madrid suspended, the future is a great unknown

And the worst is the concern about the immediate future; how the virus will move capriciously; where will he be on Palm Sunday, that there will be bulls - if he does not prevent it - in Madrid, or on Easter Sunday, the gala afternoon in La Maestranza, or if he will continue to be with us in the middle of April, when the Seville fair try to sprout with the splendor of each spring. And a week after the real lanterns go out, San Isidro begins, which runs until June 14. Posing a possible postponement in both cases seems like a pipe dream, and celebrating celebrations behind closed doors, something unthinkable. La Maestranza is in the season of selling fertilizers -from March 9 to 21-, and Las Ventas will begin in 15 days.

The sector keeps a clamorous silence. And is not for less. The stakes are high, and uncertainty reigns in the offices, in the fields and in the spirits of many gold and silver bullfighters who need to dress in lights to feel and to live.

The bull industry will seriously suffer. The bullfighters lose, but also the ranchers, the entrepreneurs and the thousands of wage earners who work in the sector.

Bullfights chosen with care can end in a popular celebration or in the slaughterhouse if the bulls are six years old and can no longer be fought.

And insurances cover suspensions for rain, but not for epidemics, and not a few entrepreneurs have already invested in their fairs.

An economic and sentimental ruin ...

For all these reasons, the Fundación del Toro de Lidia (FTL) has requested an urgent meeting by letter to the Minister of Culture, José Manuel Rodríguez Uribe, to launch "contingency plans, recovery and support for the bullfighting industry."

"The coronavirus crisis has begun to have a significant negative impact on the bull industry," writes Victorino Martín to the minister. "Although the long-term effects are still difficult to calculate, everything indicates that it will be a very season complicated for the sector, "he adds.

The turns that life takes ... Who would have imagined that a virus from the Far East was anti-bullfighting, but the truth is that it has put the season in check and threatens to accelerate a disease that for many is already irreversible.